Too Hoots About Steam

Just sending out a voice saying, some of us don’t give two hoots about Steam or Shmeam or Epic or Shmepic. We just care about the game. If this deal helps ensure the game is better, or supported, or added on to, then great. Julian et al, don’t let the negative vibes bug you (Why am I seeing Donald Sutherland driving a WW2 tank?). Keep on with the game. It looks great so far. Am expecting BB4 to really knock our socks off.

Right? I have all three (my roommates play Fortnight). I like GOG best, but it doesn’t matter to me. Especially because I’m pretty sure (speculation if you have fact please share nicely) that EGS won’t get the initial backers and even those of us who preordered before this deal, I don’t think they’re getting our money because Snapshot has it.

It has been confirmed that all money from preorders stays were it is.
Also epic probably paid than to go exclusive plus on reddit snapshot stated that they gerentee a certain amount of sales post lunch regardless of actuall sales. This means if no one would buy the game on epic snapshot would be founded for the year still (to my undersanding that is).

I understand now that hating Epic is just a thing you do on the Internet. It’s like the cinnamon challenge, or the new cheese-on-babies challenge. You eat cinnamon, you throw cheese at babies, you hate on Epic. So many people are doing it, might as well do the same.

You really are blind to the issues here aren’t you. For many, this is about far more than Epic as a storefront.

Not blind, we just don’t give a fuck, because we think about those as small issues. Really. If I would need to create a list of things that bother me right now, whole “Snapshot Games move towards Epic Games Store” would be really far away on that list. I can get over it. But I assume that people don’t have other problems thus complain about something with so small significance like they would have lost their home and sense of security.

I would be hypocritical, if I were too upset about the change, as I found the announcement via Epic Store while waiting for the update to Hades to finish downloading…

So you don’t care about giving away all your financial and personal details to a chinese internet company? Bro, I have been a victim of chinese internet scam called “brushing” for months now just because they somehow got my details through a 3rd part in Amazon. Its not about EPIC, its about EPIC BEING CHINESE!

I’m unironically happy that SnapShot went Epic, because with all that money the company got from Epic Store we will maybe see underwater missions some day alongside with floating phoenix base.

while waiting for the update to Hades to finish downloading…

Is Hades a worthy game? Bastion is one of my favorite games, and I heard Hades takes some cue from Dead Cells, my most recent favorite game…

Is Hades a worthy game? Bastion is one of my favorite games, and I heard Hades takes some cue from Dead Cells, my most recent favorite game…

It shows promise, and it is, overall, a pretty good stuff, but unless you really want to be on top of whatever Supergiant is doing I would recommend waiting until it leaves Early Access.

Long answer:
I have my preferences when it comes to Rogue-Lites so first I will give you some background for comparison:
I like Spelunky, Invisible Inc., FTL, Into the Breach, Crypt of the Necrodancer. What I like about them is that procedural generation is used to create infinite replayability and gameplay itself makes you engage with the “randomeness” of the game. Generation creates obstacles for you to overcome, but doesn’t influence your odds of success. I don’t like when rogue-lites feel like slot machines - gameplay is repetitive, engagement with gameplay minimal, and success depends on what drop you get.

I also dislike a continous progression in roguelites. A tutorial or giving player more options over time is fine, but I believe a player should have just the same chance of winning on his 1st run as on his 100th. If rogue-lite sets you up to fail on your first run and forces you to grind for power I see it as faking good game design (gameplay you can master) with flat power progression.

Hades is somewhat guilty of both, though it did already improve with its couple updates.

I do feel that my success in Hades depends very much on what blessings I get in each run. If you don’t get a good synergy there isn’t much I can do with my pure skill. If you don’t do enough damage you will have a bad time, and you can simply get unlucky. What is worse, runs feel pretty similar outside the “what do I get” aspect. It is something that can be improved by adding new content, but as you don’t really engage with the content (unlike Spelunky, or Inv. Inc. not knowing what comes is part of gameplay) no matter how large the game will be one will always get bored with it eventually.

There is also contineous skill progression but it’s not horrible - some of those unlock more nuance to the game (like backstabbing), while others, unfortunately simply make game much easier (continues, more health, higher chance to get rare/epic blessings). What is interesting is that there is a system which works other way: infernal contracts - which make runs harder (think of it as Gods in Bastion). So it’s an interesting dynamics - as you fail you will get better, but as you win, you get access, and are encouraged, to make your future runs tougher.

However, this progression brought an issue which Supergiant hasn’t solved yet - after you clear a room, you get a reward - this reward can help you in this run and will disappear when you die, or will be useless in your current run, but you will be able to spend it in the hub when you die. That means that unless you grind to unlock something, pretty much every reward for the hub world is undesirable. There is some use for one of the recources but not nearly enough to make them a desirable drop - get too many darkness or keys and you will die due to being too weak… at least you can go shopping afterward. What worries me is that if you unlock all there is, those will simply be waste of space.

Those are my main current issues with the game, which may/may not be resolved in the future.

The good stuff:
combat is fine. A bit more polished Bastion combat. I never found Supergiant’s gameplay to be outstanding, and this is possibly better than their average effort but not something I am crazy about.

However, what makes Supergiant games good is surprisingly still there. Art if wonderful, though a bit rough as it is still in developement. Music is great. but, wow, they managed to make a story driven Rogue-lite. Unlike Anthem, which seemed to try to jam a usual Bioware thing into a genre which doesn’t gel with it, Hades delivers story in a new way. And someone did some real digging into Greek Mythology - I am impressed, it is not just a windowdressing.

That’s also one of the reason I recommend to wait because once I run out of story content the game lost a lot of its appeal (at least to me as I have gripes with the gameplay). At the same time, they do incorporate story into Early Access, even if it is on a verge of breaking a 4th wall. To show what I mean here is a conversation you have when you “win” the run (all that is available right now): 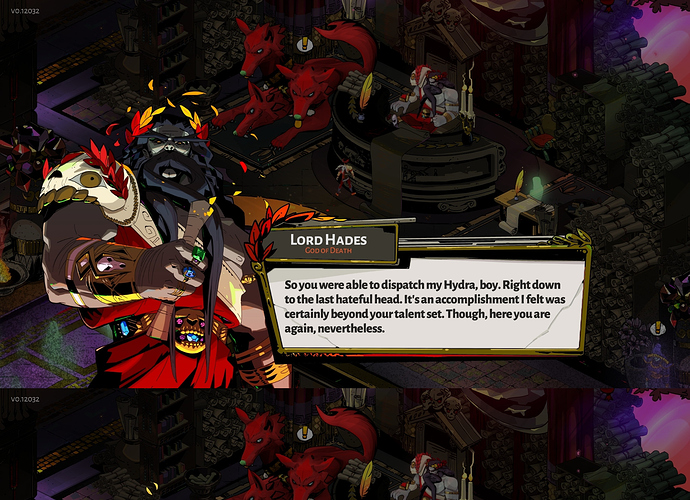 I am always looking to a new update, but it is not something I play much after doing couple runs. Kinda disappointed they do something more conventional after how brilliant “Pyre” was - it feels like they are couple years late to the party. But they do add some unique ideas to the genre.

I read all your reply, and I gotta say you seemed to be talking about Dead Cells. Have you tried that one? I’ll think I’ll wait for the final release, as suggested, though… There’s a BB4 in the horizon, after all

No, I didn’t play it but it is on my list. Rogue-lites generally have a lower priority (thought I can’t wait for Spelunky2) unless the gameplay loop interests me… or it’s Supergiant.

If you’re into Supergiant, I guess writing is an uber important part of a game

Well, DC doesn’t have that, even if it has some funny moments, but the combat/gameplay is just incredible.

You really are blind to the issues here aren’t you. For many, this is about far more than Epic as a storefront.

Its not about EPIC, its about EPIC BEING CHINESE!

How come Tencent being an investor with 40% of share does make Epic Store chinese but, for example it doesn’t make Grinding Gear Games a chinese company with wooping 80%?
You hypocrites still play PoE and Leeg.
Keep your chinese boogeymen in Reddit cesspool.

Things to worry about…people starving around the world, gun massacres in places of worship, people not being able to afford healthcare, unequality, NOT who publishes or sells a game! FFS😢

I paid for a game. I’m getting what I paid for.

Things to worry about…people starving around the world, gun massacres in places of worship, people not being able to afford healthcare, unequality, NOT who publishes or sells a game! FFS😢

Regardless of your position on the Epic dispute, that is one of the dumbest possible arguments. By that token, there is no reason to complain about anything as long as there’s something worse happening somewhere in the world.

“Your dog died? So what? children die in thirld world countries.”

The annoying part is that it’s not the first time I see it used in this epic controversy.

And yes, if you don’t like Tencent, you may also want to stop playing League of Legends. I worked for Riot before they bought it, but they were already important shareholders (Don’t remember to which extent). I didn’t stop collecting my payslip because Tencent had a hand in it.