Maybe that’s the case, but we have cooldown feature in the game,

That’s less a cooldown and more a per turn limit. But there seems to be a deliberate design decision not to prevent Squaddies from using even the most powerful skills in the game at least once every turn.

RB, Rally & Adrenalin Rush, for instance, would be much less OP if you could only use them once every 3 turns, rather than spamming them once per turn atmo.

But there seems to be a deliberate design decision not to prevent Squaddies from using even the most powerful skills in the game at least once every turn.

This No-Cooldown design seems innovative and refreshing to me. For example, you don’t have to “hide” from your opponents until the 3 turn cooldown is “usable” again. No cooldown brings more dynamic.

I just wished Snapshot would consequently transfer the horizontal power of the weapons and armor (which I like very much except for the DLC) to the abilities, so that a Lvl7 soldier does not have the dominant superhero ability, but 6X more variants than the Lvl1 Soldier has to deal with opponents.
Edit: In this way, in my opinion, no cooldown would be necessary anymore. Anyone could take variant 1, 2 or 7 at will without breaking the game.

Rapid Clearance should be reduced to 1 AP after killing an enemy, just 1

In my opinion, if Rally the Troops works after next update same as usual, without cooldown,
Rapid Clearance should be reduced to 1 AP after killing an enemy, just 1

edit: [oh you wrote it earlier than me, so I can’t say those are my words]

At the same time, you don’t want to completely nerf the skill’s utility (unless you’re @Yokes that is

Well … I too would like abilities to be way less powerful. Honestly I would not mind no abilities at all that are not bound to your equipment. Things like dash should come from your exoskeleton for example.

Yea, I know, it’s too late now and people love them “skill trees”.

Mildly dissapointed with the general direction of the game Game Feedback

I didn’t really like the new xcom games so I bought Phoenix Point immediately after seeing it had some of the original UFO:defense devs, and fired up my first campaign on legendary difficulty. I was really hoping I would get the sheer rush of emotions that came from encountering that first crashed sectoid and watching in terror as it wiped out a 3 man fire team of recruits before disappearing back into the FOW. Unfortunately Phoenix Point has not recreated that feeling. It’s the same disappoint…

I don’t know, in any case I always quote the best

I recall that someone at some point suggested that Rapid Clearance only give back the APs spent on the kill, up to a maximum of 2 APs (so if you bash a worm, you get 1 AP back, if you make a kill using Quick Aim and a pistol/PWD you get 0 APs, if you kill something spending 3APs, you still get back only 2 APs, to avoid the well-positioned assault/infiltrator sniperist), and that this would work provided that something was also done about Rally the Troops spamming.

I don’t remember who came up with this, but ever since I read it somewhere, it has been my preferred solution.

Does anyone hate it, or see anything objectionable about it, or any possible loopholes?

Does anyone hate it, or see anything objectionable about it, or any possible loopholes?

Only Sniper / Assault with some damage work from his team before he can kill and constantly using quick aim could chainkill from a good position. But IMO that needs a lot of teamwork to weaken the enemies and I personally don’t think that this will be a real ‘loophole’.

Looks ok, but may seem complicated comparing to @etermes solution.

The problem with giving back only 1 AP for each kill is that it’s the same as telling the player “don’t forget to use Quick Aim or Adrenaline Rush!”. (or find some other way to kill for 1AP or less).

It makes the use of Rapid Clearance outside of meta-builds impractical, so instead of having less meta-builds (which is what you want), you will have more of them

Quick Aim is broken if you extract AP from nowhere, the use should be, 2 AP allowing SR shot or 3 AP one SR shot + one HG shot, just that

Adrenaline Rush is a broken ability, if you can use 4 times Deceptor MG or Grenade Launcher or Dante FT, that ability should be limited to HG and Melee weapons

And Rally , one use per turn max. same as mounted weapons

I would limit the use of Quick Aim to once per turn, and, as to Adrenaline Rush, forbid casting any skills that require WP on the same turn (so if you cast Rapid Clearance, you can’t cast Adrenaline Rush afterwards).

And I also think that Rally should be a status effect (so limited to once per turn).

On the other hand, if these changes, or the changes you suggest were implemented, then changes to Rapid Clearance would be largely unnecessary.

Once again, I return to the underlying problem with all of these killer skills, RC being one of the most egregious.

If you don’t categorically close the loop, some player will eventually and inevitably come up with some way to get round the limitations and exploit it, post it on the Web, and then we’re back to Square One.

None of these solutions will work in the long-term unless the rewards for RC ultimately erode over time to Zero. Otherwise you are leaving the potential for a perpetual loop (aided by AR, Rally, QA etc) temptingly open.

None of these solutions will work in the long-term unless the rewards for RC ultimately erode over time to Zero. Otherwise you are leaving the potential for a perpetual loop (aided by AR, Rally, QA etc) temptingly open.

In theory, yes, but in practice maintaining the loop requires generating a surplus of APs. If RC only refunds the APs spent on the kill, Quick Aim and Adrenaline Rush stop being an issue in that. And if Rally is made into a status effect skill, it ceases being a relevant source of APs as well.

The problem with giving back only 1 AP for each kill is that it’s the same as telling the player “don’t forget to use Quick Aim or Adrenaline Rush!”. (or find some other way to kill for 1AP or less

Problem would be solved with limiting Quick Aim and Adrenaline Rush uses. No further changes to Rapid Clearance are needed.

Now I know that this is what you actually want, and that’s very respectable, but that’s not about preventing abuses with Rapid Clearance but doing away with it altogether…

if you create proper conditions then this skill can be usefull. For me its property of giving time for the soldier is actually more powerful beyond other skills. So I’m really for nerfing it as much as possible.

It may allow to regain 4 AP but for each kill only 1. 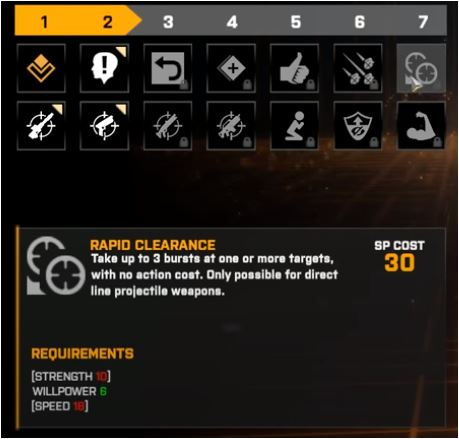 it was nice, but quite similar to Rage Burst