I am doing my best to react on aliens attacks and destroy nests before they convert into lairs or citadels.
However… this is what I got this very second: 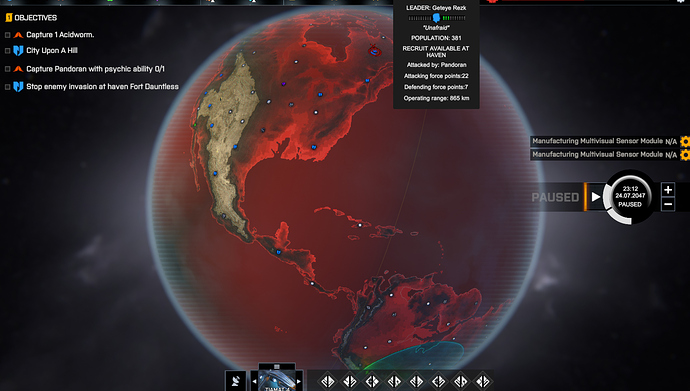 obraz.jpg1676×951 360 KB
22 points aliens attacking 7 points haven.
you can easily see that I don’t have any aliens structure operating around the globe.
you can also see where is my closest base.

Even when I’m very close sometimes I can’t get there in time. I think that once I had a manticore in range and arrived too late. Probably because the haven’s defense was already very low.

And moving to other continents is sometimes very tricky. ATM i have my main base in Algeria, and two more in Pakistan and Korea just discovered.

I cannot go from Europe to Terranova because there are no spots in Iceland and the Greenland one is too far away from Scotland and Norway, that means that to send my main squad in South America where aliens are becoming active now i have to make a round the world trip

Aliens are eating Africa, so i cannot leave, and i cannot see any new base here; i already destroyed some nests and a lair in North Africa and Europe. Should be clear but red fog is advancing and i dont know where it comes from.

A third Manticore is possible, but i’m also building technician equipment and the queue is full for a while (Dont tell me Techs are powerful or useless i want to try them being allied with NJ)

What i dont get, and think a few others too, is why we must use jump points. I dont think i can refuel from a destroyed alien base, but i can use it to jump farther away, so there is no reason not to land in Iceland even if there is nothing there; maybe crossing the ocean London to New York is too much, but Senegal to Brazil should be doable like Singapore to Australia even if Indonesia has no useful spots.

That’s exactly what I am saying

So… in the first geoscape BB build we needed havens for refuelling. And that makes sense.
Right now we need ‘points’ to do… exactly… what? Because if we say ‘refuelling’, this should not be possible in lost havens while you reset your range when you land there. I consider it as a bug, but still. That’s why I consider defending havens as an important part of the game.

Also, I think that faction’s research progress depends on the number of their research centres (like in PP case) however, they are not smart enough to build research facilities in bases protected by my mist repellers. Therefore,
I am in the late-mid-game, and

Should be clear but red fog is advancing and i dont know where it comes from.

Thats simple… - from the sea. mist will continue to spread until it’s stopped.

I’m, i think, at the beginning of mid game. I have diplomacy 90% with NJ, there was just them around my first base, 50 with Syn and 40 with Anu. Can use Gauss; but not yet lasers and whatever comes with Anu tech, think i read mutations.

Syn told me there are mist repellers but i’m not sure i supported the right faction to have them after the 50% diplo mission; Anu is mainly in Asia and there are no alien bases that could attack them so i dont know how to improve relations and get better techs

Let’s see how it develops; for me is the best point i ever reached even if armor, weapons and other techs are the same i had at game start

I’m finishing my own research and those of the NJ tree, armor piercing and Armadillo; need to capure a Syren a Charon and a couple more worms but i know they dont lead anywhere apart the 10% damage bonus. ATM is not a worry

Just got third base and i’m building factory, food and living to expand a bit more my army; new Manticore planned but after a some Technician stuff, want to try tentacles and have a real medic in the team

Strategically i’ a bit stuck because there is no way to reach America from Greenland and let’s say it sucks; Manticore 2 is opening the Alaska way but will take some time

The Synedrion raid ended with an unusable savegame; will replay it now to be able to have ammo for lasers and, i hope, stealth technology and paralyzing rifle.

even if there is no structure available

22 strength - it must be citadel. They have range spanning whole continents.

havens are your transport nodes (even if the entire idea is just pointless) losing a single haven in a strategic location (Panama canal?) could completely cut you off

Strangely you can use destroyed nodes to refuel.

Strangely you can use destroyed nodes to refuel

yes, I mentioned it in a different topic, but I consider it as a bug… as it makes no sense

You can also use active nests to refuel, just dont deploy e fly away; aliens are so kind sometimes

I wonder if they have a diesel or bio-fuel only

I wonder if they have a diesel or bio-fuel only

I believe vehicles come with a battery of back-up hamster wheels to act as auxiliary power. So your guys just drop outside the nest, herd up some crabmen and put them to work.

Blow thier arms off, paint some golden skulls on the wall in front of the hamster wheels, and watch them run for thier lives for the “exit”!