It doesn’t make sense that a rocket takes up as much space as a pistol magazine. I would like to see different-size inventory slots:

Belt or bandolier: for magazines, grenades, and the anti-virus injector, and
Backpack: for medikits, rockets, and other large items. 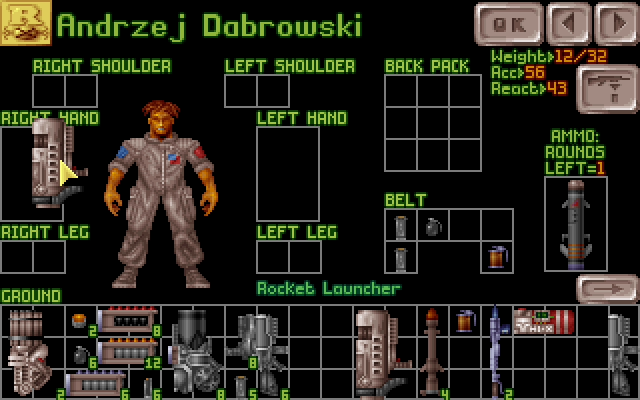 The original XCOM had exactly that. I really, really like that old game for many reasons. Sometimes streamlining and simplifying works, sometimes it leads to new problems or weird in-game logic.

You’re right. I had forgotten about that!

There must be some intention behind it. They wouldn’t even have to redesign the UI. Allowing stacks of smaller items would do the trick as well. That said, I am quicker to run out of carry weight then of inventory space.

I had the same problem until I discovered that I could use skill points to increase a soldier’s strength. At lower levels, strength is still the main limiting factor in what my soldiers can carry.

It’s also increases the soldier’s health. It’s the first characteristic that I invest points in.

rather have 20 speed than some of skills and perks…

Well, I can see the pull towards 20 speed. Especially when you’ve gotten used to Speed 20 soldiers in earlier patches when it was cheaper to get. After the increased SP cost and changes to Dash, I’ve just accepted that every soldier is not going to be running around as far as they used to. I still absolutely go for 20 Speed for shotgunners, but mostly stay at 16 for everybody else. Additionally, the new salvage missions require higher Strength than previously needed, so I’ve been increasing that across the board.

If you play with save / load - this is understandable, but if you do not - it is very risky.

i do it with all assaults, but especially those with PDW specialisation… these get Laser PDW ASAP, and are my close range cleaners… they can wipe out number of enemies in single turn quite reliably…plus when multiclassed with sniper, they can quickaim for 0AP, and overwatch for 0…

i dont play save/load… i use my assaults as a first thing into fight… they move into range and shoot whatever they find… with snipers shooting from behind them whatever left… and PDW assault/snipers can overwatch for free… so when they stop firing, they can still overwatch… (and afterwards return fire)

plus when multiclassed with sniper, they can quickaim for 0AP, and overwatch for 0…

Hahah, nice find! I have to remember that.