Reason and Explanation of Scavenging Site

After discovering the “Unexplored Site”, Manticore with the soldiers flies into place in order to “Explore”.
(In my opinion) Then there is a search and storage of resources for transportation to the Base.
But our activity attracts the surrounding Monsters, therefore we need to “Protect Crates” (we brought empty containers with us to pack resources).
Also, we need to “Kill All Enemies” for safe loading.

And Monsters, for their part, simply aggressively react to any new and incomprehensible stimuli (strange Containers and People). 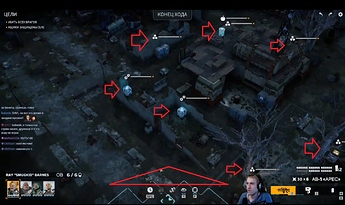 Scavenging1440×858 242 KB
This map should be a model for all “Scavenging Site” missions. The containers are grouped, and the soldiers are somewhere nearby and protect them from the Monsters that gather around.

Who likes the current gameplay and mission rationale?

1 Like
Developer Proposed Game Mechanic Updates
Attempting a realistic/detailed representation of missions
Why Scavenging Missions are Broken
noStas December 8, 2019, 11:35am #2

As a beginner or critic sees this mission.

What are these сrates? What are they doing here and how are they here? Why are the сrates scattered all over the map and on the roofs? Why are Monsters attacking them?
Only one answer - this is Resources, sounds unconvincing. And you “simply and thoughtlessly” fulfill the Mission’s goals, without understanding “What is happening here?!”.

An important note, you need to connect the game process and the story, the mission of “Scavenging Site” and “Ambush.” In case of unsuccessful “Scavenging Site”, the soldiers do not have time to search them and find themselves in the “Ambush”.

1 Like
Developer Proposed Game Mechanic Updates
Ambush missions are tedious
A little help with the narrative
SpiteAndMalice December 8, 2019, 11:42am #3

Yeah, they stick out like a sore thumb, I thought during the backer builds that the resource crates were placeholders and that we’d get to see a variety of different graphics which would look a lot more like natural resources to be found in different environments.

Such setup won’t change that you can as well get multiple containers broken with one grenade and even with one AR shot or something.

Increase containers HP/Armor will fix aliens too long on containers.

For me the problem of those missions is they don’t scale well. They become quickly a guaranteed lost of resource.

If they didn’t stick out like sore thumbs players would complain they couldn’t see them or don’t know what to defend. Even with the indicator icons.

They are representation of some resources to be gathered. Yes, they look like some super cool future containers, but it is just visible representation of resources available in the surroundings. You can cosider them as blueprints, advanced pieces of equipment, tools, planks, food cans, vehicle parts etc.

What are they doing here and how are they here?

Left by other humans. They can be considered to be some storages like footlockers, old boxes, safes, holes in the ground covered by some planks. But that would need a lot of new graphic objects and some algorithms to fit them into surroundings. This design was left as is right now to save time for other elements of the game.

Why are the сrates scattered all over the map and on the roofs?

Because people left them there not taken when killed or evacuated.

Why are Monsters attacking them?

To prevent you from taking them.

Maybe later Snapshot will upgrade them. But who knows. This is really low priority problem for me. When SG won’t have much to do (fix PP1 or make a sequel) they can work on additional props to replace the old ones.

If they didn’t stick out like sore thumbs players would complain they couldn’t see them or don’t know what to defend. Even with the indicator icons.

You can have a middle ground though; something that fits within the aesthetic of the map as a whole, but stands out in its own right.

The problems we want to resolve:

•Pandorans destroying crates makes some sense, but not for other factions.

•The AI does not manage target prioritisation well between attacking crates and enemies.

•They feel like the usual ‘kill all enemies’ mission.

•Scavenging missions can get tedious and repetitive.

We have a number of broad solutions, and could possibly implement one or more of them.

•Soldiers need to go to crates and collect the resources from them.

•They can evacuate any time with what they have.

•At a certain time in the game, scavenging sites are upgraded.

•The threat level increases by 1.

•The rewards are higher.

•The map tilesets are different.

•Place crates near your soldiers’ deployment.

•Soldiers need to go to crates and collect the resources from them.

•They can evacuate any time with what they have.

•The rewards are higher.

Any rewards, but NOT increased resources from the mission. More XP, SP, PP for a difficult battle.

Solution 1: So early in the game, when one has raw recruits with no strength and they can barely carry 1 extra ammo magazine & 1 medkit, they are supposed to go scavenging. Then they only get what they can carry back, virtually nothing.

Solution 1 is decent. Could do with a touch of fleshing out.

Why does solution 2 need to be separate? I’ve been saying forever that rescue missions should be a thing. Independent soldiers who join PP great, a vehicle convoy of civilians caught in a Pandoran ambush awesome, the crew of a crashed faction airship yes please. A lot of variety can be had through the creative use of existing map assets.

3 doesn’t really make a lot of sense. The three primary resources I can see finding in abandoned warehouses, bases, towns, etc., but mutagen? Maybe at an old military base or former research lab but not in general. Also why would the amount of resources suddenly increase for no reason.

4 I don’t like at all, it encourages start point turtling/camping which is bad enough already.

Solution 1 is decent. Could do with a touch of fleshing out.

How is this implemented in technology theft mission? It’s Good?

2 I do not understand, but is it possible to fix Scavenging first?

4 it had to be done initially

Sure 4 is just a very minor rework of the existing mission but at least now you have to prioritize what to try and protect since you generally can’t cover everything. Moving all the crates near the spawn point and leaving everything else the same would get boring incredibly fast. It’d be better to just leave the missions alone and simply boost resource amounts across the board to make up for expected crate losses. Save them all big reward, save half get the amount you currently get saving them all.

I see your opinion on how to - delete the mission and just give resources. Just because you are tired of the design of these missions. This is what they want to fix.

I don’t know where you pulled that out of but it certainly didn’t come from me. I’m good with scavenging missions just the way they are.