I recently updated to the new version and just unlocked mutoids. Game was going fine til I gave my mutoids the fireworm launch ability.
Upon entering a battle with my mutoids, during the loading screen, the game gave me an error message telling me that some corrupted files were detected and suggesting a reinstall. I had never seen that error message before.

The battle actually loads up fine despite ether error message, and everything seems to work EXCEPT for the fireworm launch ability, which when selected just displays a grayed out orb during targetting. None of my mutoids can use the ability, despite having the 2 required action points.

This error message only happens when my mutoids which have said ability are in a battle, and the ability seems to be the only thing affected/unusable.

I was going to start a new save to check if that’s the issue, but it seems unlikely to me. I love this game and was real glad when it came to consoles, and it’s been a fun but real rough experience. I really hope things work out cause the game is really good.

Edit: here’s a picture of the error message: 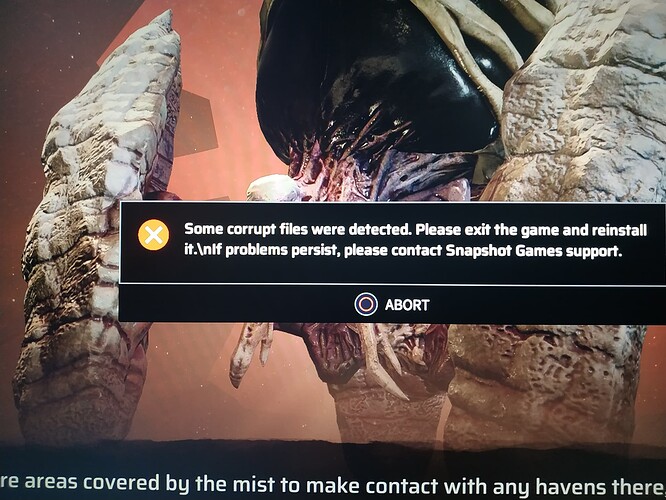 I don’t think it’s mutoid related, I’m getting it too and I don’t have any mutoids. I’m just doing a NJ haven pandoran attack with my heli, and a squad of 7.

Weirdly when I hit abort nothing aborts. The missions still starts, but I’m scared to continue now.

Maybe try to reinstall game? Or it happens despite reinstalling?

Update: uninstalled, then reinstalled the whole game. Started a new save file, got to mutoids then brought them for a mission. Same error persists, and it only happens when I bring mutoids to a battle.

Additionally, when trying to use any of the melee mutoid skills, after selecting the “mutoid arm” weapon icon and selecting any melee skills, they appear grayed out, with an error message saying “no suitable equipment”. Tried equipping them with a weapon just in case, but no change.

I will try reinstalling the game yet again tomorrow, but if that doesn’t fix it, I’ll just uninstall one last time and forget about the game until a new update rolls out that hopefully fixes this issue. I’m totally burned out after starting a new save since basically an entire game feature is unusable for me.

I really do like this game, but it’s very disappointing just how terrible of a console release this has proven to be. I hope this gets fixed soon.

Yeah, after a full reinstall, problem continues, so it’s def a problem on the console version itself. I’ll just drop the game until an update hits.