Encountered that bug now.
My question, if I restart a new game, will I face that bug?

I wonder why you create another topic with the same bug. But answering your question = from description posted by community manager probably yes. You will encounter it even with new game.

Sorry, if there is already a thread with that topic. Didn`t see it. Could you please link it?

Is there a time schedule, when that bug is supposed to bei fixed?

there are two threads:

My game just auto-updated to latest version and all my saved equipment, spare armour etc has disappeared. Nothing in the equipment store at all. Also, area scans no longer complete - just pulse at max circumference preventing you from scanning elsewhere. Not good, a patch which fixes some minor bugs but breaks the game!

so the power issue is fixed with over 20 power but it seems my save has lost all unused armour and weapons (except NJ pistol??), still got ammo med kits etc. Also lost all aliens in containment

and a note from devs:

If you have been affected by the missing inventory items since the Miskatonic patch deployed today (Jan 31st), please do not save over your save-games. We’re currently debugging the issue, after which you should be able to reload your original saves with all of your equipment. However, this will not work if you save over that file with a new save where the equipment is already missing.

Thank you for the prompt response. I guess I have to wait out for the debug before continuing to play.

Is this issue an hour’s thing or days?

Quite frustrating the auto updates for patches if you have a stable version and are happily playing, then they update you and introduce bugs.

I hope, they fix this soon, as it makes no sense to play it at the moment.

Until then, I return to Xenonauts

I have backup of the game before patch with nerf, I can make a second backup before to apply last patch, but it seems the inventory bug is here for all players, so I wonder.

In previous game version (pre patch with nerfs), I quoted inventory problem only after a scrap session. But this bug was related to soldiers equipment not global stash. Still I didn’t do any scrap and never had it anymore.

I wonder if it can’t be the same with last patch and this new bug.

Do you believe, they will fix this the current weekend?

Mac, load save from prev version, count items in stash, 8 rows and an item. Save and load this save, 5 times, no stash change.

Don’t overwrite your saves, announcement at the top of the site says once they’ve fixed the issue you should be able to get your equipment back so long as you still have the save file it all disappeared from.

In other words, stop playing the game until they fix the bug. What good is not overwriting a save, when all of your equipment is “stolen” at a point. Waiting for a fix of the bug to use an old save (not overwritten) where your equipment was lost is waiting for the bug to get fixed before one can continue using a product one paid for.

Just before I lost my inventory I started seeing one of my units getting a replacement ammo pack that showed as “2” in the body screen. Dragging it to an empty spot in storage it still showed as 2 ammo packs, but when dragged back to the body it was only 1. Next time I check after leaving base, my inventory was empty. 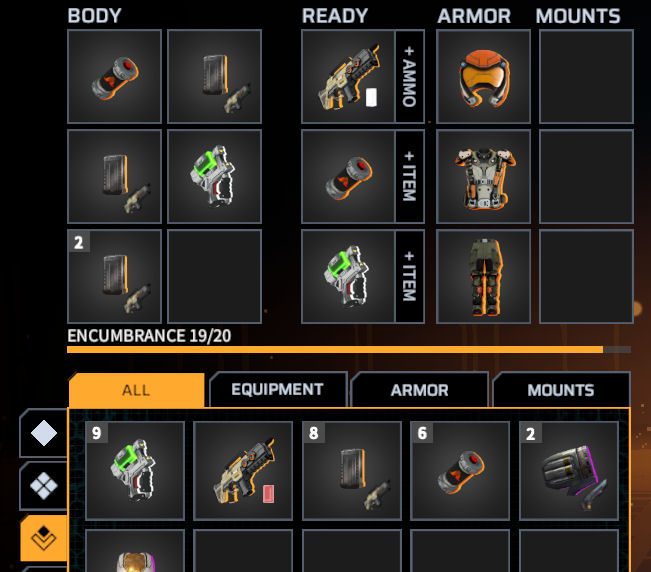 Don’t overwrite your saves, announcement at the top of the site says once they’ve fixed the issue you should be able to get your equipment back so long as you still have the save file it all disappeared from.

Yeah it’s not good. They can’t seem to introduce a patch without creating more bugs (usually game breaking ones) in a game that was buggier and more unbalanced than it should have been for a finished product anyway. Like I keep saying, we’re basically QA testers for Backer Build 5.5.

At this point they should be thinking about some sort of ‘thank you’ freebies for us, really. I would suggest Living Weapons being made free for everyone but that would be a bit of a middle finger to people that paid extra for the special edition (not to mention it’s not a freebie for them). Anything else though is going to take yet more dev time and, given the track record so far, will probably have more gamebreaking bugs in it.

So the masochist I am, I rolled back to a save where I did have inventory and moved on. It seems that the bug was either triggered again when I found my 2nd PP Base or recruited my first soldier. I am pretty sure it was the recruiting that triggered it. But I can’t be sure because a couple of my previous saves (where I was pretty sure I had inventory before saving) also where missing inventory (how a previous save can get hit by the bug I have no clue).

Okay, that did it, I am hanging up my beta-tester apron and will wait for a fix (on to something else that isn’t as frustrating – I really, really want to enjoy this game, but…)

I stopped playing right after the Epic Fiasco. I’ve been waiting for some fixes. I guess I’ll wait some more. I think the mod community should get going on it. That might help like someone else stated elsewhere. I think it will get there. These things do take time. Maybe a beta branch would help?

Can not understand, they didn`t test the latest patch.

to miss such a mistake that will make the game unavailable and not fix it within a couple of hours means complete disrespect to the players, I’m upset…They didn’t even give you the option to roll back the update

@Nelr you are so right man, it’s unplayable and they are doing nothing about it