Not a green branch, what wrong?

I have been playing the game for several days (71h of which 20 read time), but I don’t get a green branch, and at some point I am overtaken by the virus without being caught up. And understanding the game mechanics is not always easy either.

That’s why I need to know something:

not sure what van is, but what it wouldn’t be, you don’t have to.

do I need vehicles?

flying ones you need

Can I be allied on all factions?

yes, but it is not easy to achieve

Where’s the damned hatchery in the citadel?

Where can I switch off enemy artistry from the other end of the map (ion cannon ??)?

Can I not open the door during the bear defense and starve it?

You can always try to starve the door, but hard to say how much time you would need to wait. With the bear it will be easier, but I can’t tell exactly as I haven’t met one yet.

Why are there no doors?

When I go to a battlefield, are the enemies x times as strong depending on the level of the troops?

If you play really well, enemies will get tougher and more numerous.

Can I survive with a lvl 1 squad in the later game?

Can bases and bunkers be revived?

Bases no, haven’t heard of bunkers yet, but as they are not living entities probably not.

Let’s start off with some tips:
Food is the only resource you can directly produce, it’s renewable, thus being able to manufacture a lot of it to trade is very valuable. With that in mind build food production in your starting base as soon as you can. In your second base build several food buildings so you have more food to trade for materials and tech. In my most recent game i stuffed 6 food buildings into my second base.

Purchase or steal a second aircraft as soon as you can. Synedrion has a fast 5 seater, New Jericho has a 7 seater, and Anu have an incredibly slow 8 seater. Ideally you’ll have built your own 6 seat aircraft for your teams but stealing one early on to handle recruiting runs, trade runs or just starting scans leaves your main craft and it’s crew free to do the important stuff.

Training centers in a base stack, i set up my first base as my training center. Use an empty aircraft to hire new recruits and haul them back to the training center to sit idle. Doing this i had a second team at level 6-7 before my first team hit level 6.

Ground vehicles aren’t needed but can at least be handy for base defense. I read if you have no crew at a base under attack you get no notification, park a ground vehicle there though and you have time to fly in a defense force before the base is destroyed. Though they are not needed it does beat having an undefended base sitting in the mist. 2 Vehicles can be parked at each base, and since they don’t use up your soldiers housing slots if you can afford to build one for an at risk base it can be worth it.

How many troops do you need? In my current game i have 3 fully crewed 6 seat aircrafts and feel the need for more, i just picked up my 6th base and feel really vulnerable as i cannot cover half the globe if the aliens get busy attacking. Grab any recruit you can afford any chance you get, park them in your training center and let them level up.

Citadels have a massive Scylla as the objective. It’s much larger and more dangerous than the artillery pandorens. Should be easy to spot as they are several stories tall and can walk around.

I’m guessing by “artistry” you mean “artillery” the long range attacks they have? If so that’s a Chiron, believe they are limited to 5 volleys before they run out of ammo. Not much you can really do if it’s out of range or line of sight of your snipers. Maybe put your guys under a roof and far enough in the bombs cannot catch them in the blast radius.

There are doors, they open when a unit walks adjacent to or through them and close at the end of your turn or the aliens turn, depending on which side opened the door. Doors can be destroyed by weapons though. If you want to set up an overwatch trap inside of a door pull your guys at least one square away from the doorframe before setting up overwatch so the door can close.

As Yokes said, a level 1 squad won’t survive on the field int he late game. Though it’s easy to level up new recruits with how training facilities stack if in the same base. Just be sure and move any new recruits to the base.

As for allying all factions i believe the answer is yes, though it’d take some tricky juggling of their missions to pull it off. Seems anytime you help one faction the others get annoyed with you. They also have relations with eachother, and over time it generally goes down until it becomes war. In my current game once Synedrion angered New Jericho enough NJ did a blitzkrieg on them. Something like 8 havens fell in a five minute period before i stepped in, though of course that hurt my relations with New Jericho… Humanity seems pretty intent on eradicating eachother rather than the pandorans here.

Thanks for the many tips, really helped.

I still have a question after I finished the Citadel and Scylla.
I despair to find the brood chamber on the building, even with exploring / loading (act of disruption) I have not found it.

I’m guessing English is not your first language, and the translate makes some thing difficult.

If by can, you mean aircraft, then consider bases simply as modifiers… Each base let’s you have more aircraft. You don’t need them “stationed” there like in xcom, beyond selecting a base for it to be deployed from. Once it’s in the air, it can go to any base for healing when needed.

If you mean vehicles like armadillo or scarab, they are entirely optional, but having one in a base means it will be available for base defense if you get attacked.

You can ally with as many factions as you want. 1 is easy, 2 isn’t too difficult, and 3 is tough. It gets harder as the game progresses and they begin attacking each other.

You should hang on to as many troops as you can afford to. Ideally, you want more than one squad out in the world, and you want several soldiers at your bases.

Citadel have a different objective than lairs. No hatchery.

Here is where the translate starts breaking down. Enemy artistry has no meaning. I’m thinking you mean enemy attacks or something like that. You need to either find a Phoenix base in the area, or rotate squads through the area to keep fresh troops available there. Or just let it go… We aren’t meant to save everyone.

Not sure what you mean with starve it in the next one. I get that it’s a question about base defense. Maybe you want to know if you can open the door and go outside to take the fight to the Pandorans instead of playing defensively?

There’s doors, they just act weird. They only open if you stand next to them, and don’t stay open. They do block sight when closed, though.

There is no way to bring a destroyed haven back online.

Yes english is not my first language.

The Eminem Base are:

It is only this question, the rest are answers. Thanks for This

This is ohne Translater

Hello Starkiller I think I understand what you mean.
There are 3 tiers of enemy base:
Nest: kill the hatching sentinels
Lair: kill the spawnery
Citadel: Kill the Scylla

I think you’re having troubles with the lair.
The spawnery is usually decently hidden in one of the corners of the map. It resides in a sort of hole in the ground surrounded by walls. 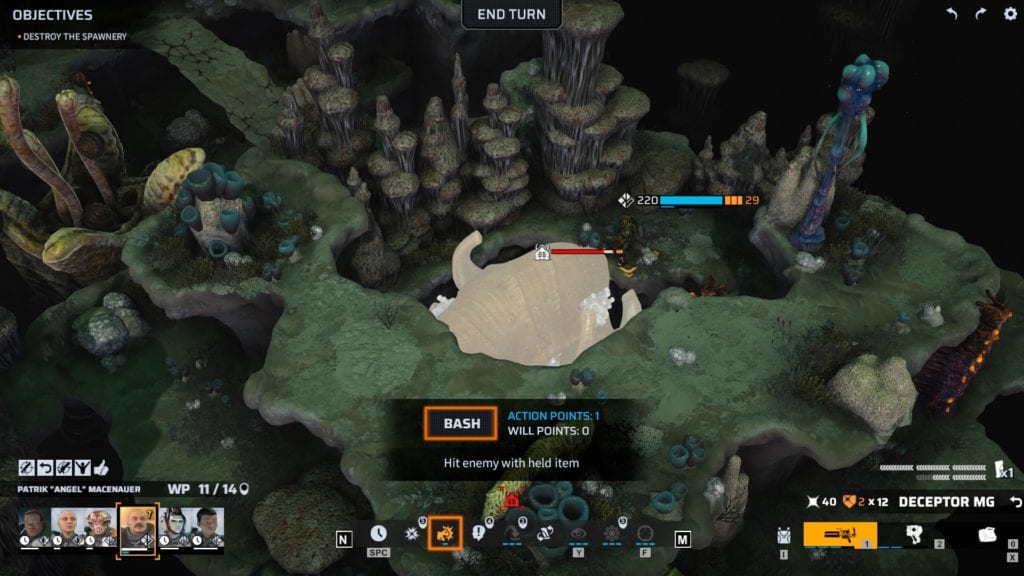 Thx for your very big help, i have 2 days all shooting in the lair, the eck war the answer.

All question the fine. Thx