Hey there, here my Feedback:

First of all, it is really nice to see the progress made from the previous BBs!

I like it, but if lvl 7 will be the maximum, the cost should be increased on higher lvls.

I have the feeling BB4 is a bit too easy compared to earlier BBs.

That’s it at the moment!

I have the feeling BB4 is a bit too easy compared to earlier BBs.

Seriously? Maybe you had an easy start, but my 6 rookies on first mission had tu run away, because of overwhelming alien forces - crabmen with guns. My soldiers without skills and cover were just like sitting ducks. Next few missions were also painful. Lost 2 men, and that was almost game over. Crabmen are weaker, but you need soldiers with skills to kill them.

I have to say that I took out every enemy on the map with ease on my 1st mission - Mind you they were all stood round trying to punch their way into a crate and totally ignoring me whilst I was busy reducing them down to bisque.

Strange. I have read that enemies ignore you while favouring crates, but… It was also resource defence mission for me but more than a half of enemies started to pour their bullets on my soldiers. It was in the mist zone so there was quite many of them.

After 2 turns my soldiers had no cover to hide, and enemies which i have killed were replaced by reinforcements. I had to give it up and run to evacuation zone.

PS. If those were the pincer guys then maybe there would be no problem.

True, they mostly focus on the crates and not you, even if you are shooting on them. Very confusing on me. But that is one of the reaons why it is easier. Haven’t seen them shooting on me if a crate was in their radius.

The whole game is RNG, do you have a good starting point for your HQ? Do you have good Soldiers (skill wise)? Will you get another soldier fast?

I really had no problem from the beginning, haven’t lost 1 soldier yet, but I had to restart like 2 missions cause of bad mistakes.

I’ve read a lot about crab going for crates, but my crabs attack crates while I’m far away, and focus on me while I’m near, and due do their telescopic super x-ray vision while carrying machine guns, “near” is really subjective.

Maybe it is all connected to weapon range then… the ones I had all were wielding claws. They weren’t interested at all in attacking me, they did use shields to defend themselves though, so they knew that I was there.

and due do their telescopic super x-ray vision while carrying machine guns, “near” is really subjective.

So, you have snipers, give them the jet pack and bring them on high ground and the PP assault rifle still have a range of 31. The Hel II Cannon has still a good range with 17 and can one-shot even if you just hit the shield or just use the missle launcher or granade launcher, both have a good range.

I have been having a real tough time with the Hell II Cannon, it’s deadly and very very fun to use if it hits. But I’ll give it a shot using a jetpacked sniper, have yet to experiment with it.

As for grenade launchers, they were so overpowered in BB3 that I just challenge myself in not using them. Don’t know if they were nerfed in some way for BB4.

Yeah, try to give all “ranged” Soldiers the Sniper Helmet and Legs until you can unlock skills with accuracy. My heavy barely misses, just really small targets. 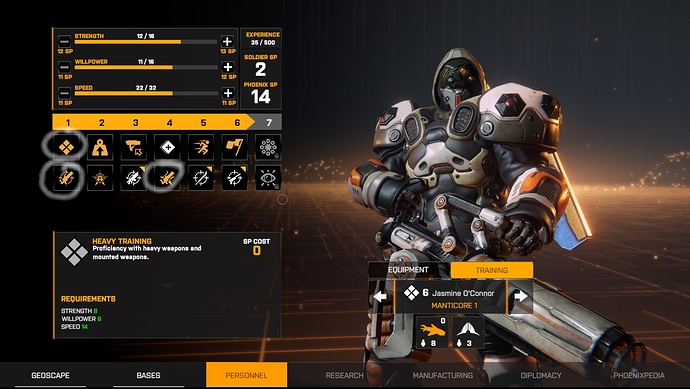 or just use the missle launcher or granade launcher

Btw I understand that this is the same Grenade Launcher with some stats changed and rebranded from Firecat to Goliath? We can’t find Firecat, or we can?

Not 100% sure, but it looks like they are the same weapon. As i remember the Firecat was not from NJ, neither the Goliath is.