Finally after 80 hours of my gameplay,l managed to defeat the final boss called the Yuggothian receptacle,lt was very tough and challenging in the process than any turn based tactics game boss l have faced because it is so unbalanced making it the top 1 hardest enemy in my list ,even in easy mode,l was very unsuccessful in the first time,l even thought l need to restart the game because of it,but thanks to the loyal fans in the forum giving me useful tips and ideas, otherwise l wouldn’t be here helping you to make a fair fight

Huge thanks and shoutout to mirage2154 for telling me the priest(psychic ward ability) and giving me the correct direction to advance in the story mode.

And joshybone for giving me hints to motivate me to start my first 100% stealth inflitrator build.

After the cutscenes,since there is no game summary like xcom 2,l cannot share any of my status in my gameplay with you

Content
1.My squad build and some tips
2.how to defeat the gatekeepers guide
3.inside the gate enemy threats
4.how to defeat the final boss(explain 4.1,the unlimate guide 4.2, miracle 4.3)
5.Endgame(finally)
6.conclusion

In the final mission,you can bring a maximum of 9 solider

l recommend to you remember to bring a lot of ammo,since there is a lot of enemies and the boss have a lot of health points,bring 2 medkit and always make a checkpoint save file and always save your progress if something goes wrong,you will be hate to restart again.

Of course,you can just ignore my tips,it depends on how you play and what tactics you are using.

(2 Scylla,4 goo or worm Chiron,3 siren,3 Triton,8 crabman) in easy mode,since l haven’t play this game in normal or hard difficulty yet,l don’t know will the number go up or not

How to kill the gatekeepers:

What you want to do is try to kill as many Infantry unit as possible in the first turn to drop both of the Scylla will power below 0 to give you a extra turn to finish them off,to achieve the panic attack on Scylla,kill all the lnfantry on the field plus one chiron that should do the trick

If you remember reading my broken 100% stealth inflitrator build(link in the end),l mentioned a combo with the rapid clearance and the dash ability,with my combo,l wiped out all the enemy that take one shot to kill (sirens(aim for the arm),Triton and crabman) in a single turn,a Chiron have more health and armor so if take two shots to kill 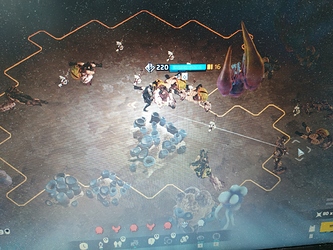 then,l used the remaining inflitrator 4 action point to kill 1 Chiron to drop both of the Scylla willpower below 0 to give them a panic attack,so it can give me one round to finish off the remaining 3 Chiron and 1 Scylla,l killed one Scylla using the rage burst ability from the heavy in the first turn,then l killed all of the gatekeepers enemies in the second turn with my squad

After you kill the gatekeepers,don’t rush inside the gate to kill the final boss,because there are explosive bomb abdomen near waiting for you to bombard your troops

if you remember reading my overpower bomb abdomen Chiron forum(link in the end),you will know how annoying those things are,but if you are outside the gate,they cannot fire on you,because there is a huge wall there blocking the fire radius from it

What l did is since you can have vision on the explosive bomb abdomen Chiron outside the gate,you can use your sniper rifle to hit it outside the gate by forming a line of snipers ,this should be much faster if your sniper have the mark of death and the rage burst ability 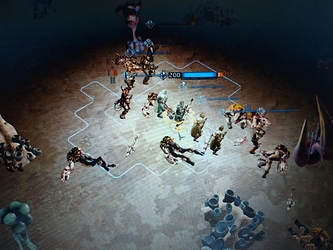 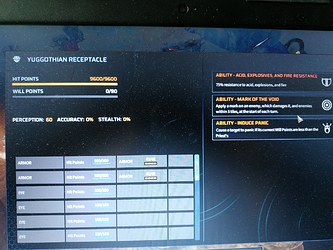 4.1 Explain(why the boss is unbalanced beyond and overpower) 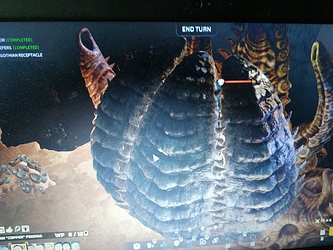 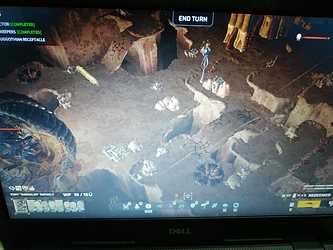 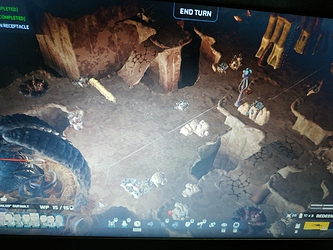 So since you cannot do damage from far distance,just get closer and finish the job,sound easy
right,wrong actually,because here come the second problem

2.The mark of void broken ability

What this ability do is

if your squad is marked by this ability in the enemy turn,it deals 60 damage in a splash circle radius,if it is targeting on a single unit,it can deal up to 200 damage,not kidding here,similar to the explosive bomb abdomen Chiron again:no cooldown,no showing where the hit radius is,no one round to evade,the only place to hide this time is in front of the gate,

Plus since because of the tentacles wall and the boss have a lot of health point,l am sure this ability will wipe out your squad faster than you advance to the flanking position and your damage deal to this boss 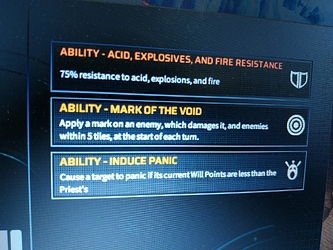 imagine if the xcom 2 codex psionic rift ability is like this,spawn a bubble in your squad then your squad get hit by the bubble immediately,l would have complained too,but they did a very good job maintaining the enemy mechanics unlike phoenix point enemies mechanics for now

Huge thanks to mirage2154 again 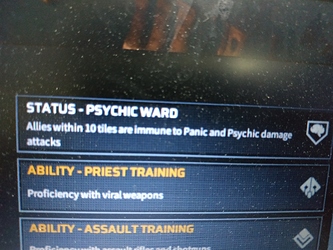 This is very useful

because the mark of the void is count as a psychic attack,that means it will deal 0 damage to your troops if your troops are standing next to the priest 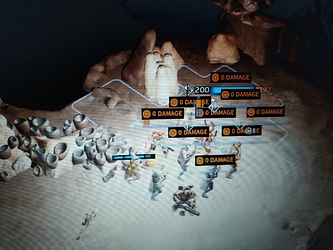 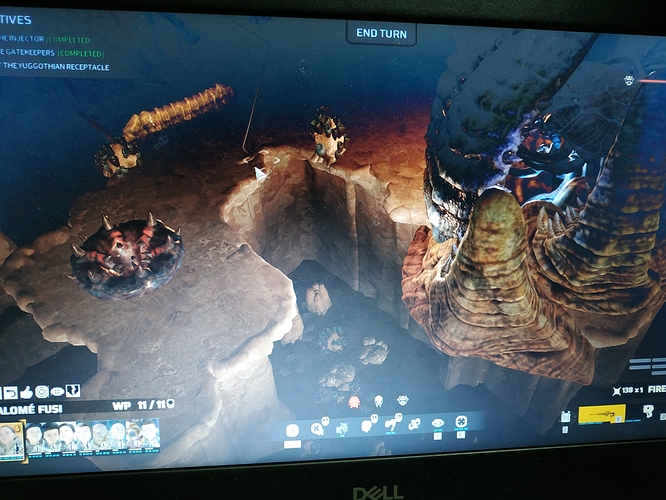 Here is my formation of 3×3 squad size 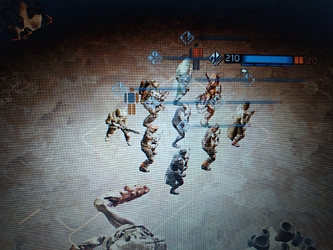 All you need to do next is

run,stop,shoot ,It should take 8 to 10 turns to get to the flanking destination,but be careful on the way,there are crabman and siren spawning from spawners near the area 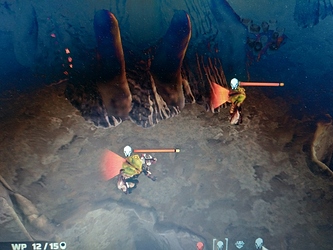 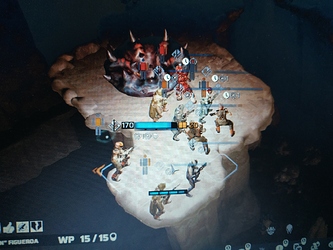 After l reached the flanking destination,l started firing at the final boss,then something unpredicted happened

The boss lowered one of the tentacles wall in front of my troops,it was a miracle and a tide turning moment for me 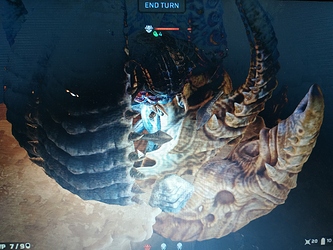 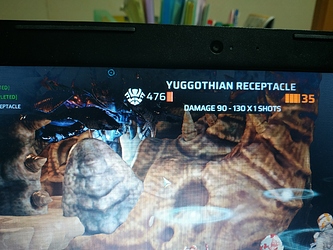 After you kill the final boss,you will have one final objective to finish to do in order to finish the game

Just deliver the injector to the destinated spot as simple as that,let’s hope you remembered to pick up the injector in the beginning, otherwise lol 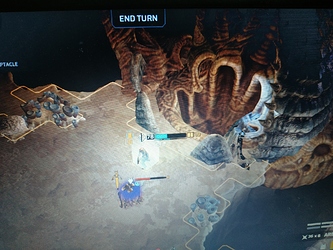 Finally after 2 years of waiting,l get to see the one of the ending in Phoenix point which one l won’t spoil it

l think with proper update and improvement,this game can still be a masterpiece.

If you have any suggestions or other ways of defeating the final boss,you can tell me

The link to other forums:

lf you are having a hard time playing this game in late game like me because of the unbalanced enemy mechanics, unbalanced Mission mechanics or cannot make progress in the game because of other reason,since the game mechanics is not fair,why are we the only ones playing it fair,l hope this guide can help you make progress and make you start having fun again. (Don’t tell unstableVoltage and Julian gollop about this,they will get salty and jealous about it just keep it between you and me) lol M…

What’s the idea behind the 100% stealth thing; basically because of the 100% damage boost while stealthed and 100% stealth you can just use a shotty on sirens and below and they just die? What weapon did you have to equip, and what if you don’t roll an infiltrator with the stealth perk?

lf you are having a hard time playing this game in late game like me because of the unbalanced enemy mechanics, unbalanced Mission mechanics or cannot make progress in the game because of other reason,since the game mechanics is not fair,why are we the only ones playing it fair,l hope this guide can help you make progress and make you start having fun again. (Don’t tell unstableVoltage and Julian gollop about this,they will get salty and jealous about it just keep it between you and me) lol M…

Interesting, I’ll have to try. Few questions though

If you have 75% stealth,you will get revealed on the map,once you open fire

i just stumble in this mission with my 9 guys wiped out by 2 shot of blind fire by chiron artillery at the first hall, no fun in that hope they fix this dumb aim of some enemies. Reload and back in action this time no mortar snipe from orbit artillery just goo and worms, i just waited behind the wall and kill the majority of them except for the chiron, until the game slap me in the face bugging itself during overwatch for the second time in this gameplay, i really love this game.

Don’t worry,l got your back,l am sure since this game is coming out in steam and PS4,there had to be updates and improvement later

it coming on steam? Damn hope i can transfer the game there.

So you gonna tell me, that without a priest class, this last battle is unwinable ?

Yes,no choice with mark of void ability in the way,it seems this game development was hugely rush for some reason

if it is so it’s just dumb, where my choices in there if i don’t like the priest class or multiclass character in the chees way uh? Some things on this game make me mad every day damn.

You should probably mention is that disabling YR’s eye lowers its HP by ~900 if I remember correctly. And it has quite a lot of unarmored eyes to shoot.

You can kill the Scyllas by going to the immediate left when you start the map. The wall doesn’t extend far enough and you can snipe them with them only doing range attacks against you.

Next kill the enemy launcher enemies by sniping out of their range of fire.

Finally use a priest or the head lady from the cultist group to mind control some of the endlessly spawning crab monsters. Go and spit poison on the final boss, it’ll be dead in a couple of turns. Use rest of your guys to defend the mind controller. If boss voids the crab guys, wait until more spawn and repeat the process. Don’t get in range for boss to void your mind controller or other units (besides MC’d crab guys).

I did this mission on hardest difficulty with 3 snipers, 1 assault, 2 heavies, and the Anu priest lady.

I beat this boss without the priest ability on a harder difficulty, and I didn’t know his mark was psychic damage. Obviously, that’s so good, you should probably bring it, but its not necessary. I lost a few soldiers, but tbh, i figured it didn’t matter since it was the final mission. I just killed it before it killed me.

I think she does, but you don’t need it if you just mind control the crab guys and send them in. Hold your forces back out of range of the void mark ability.

75% stealth is still pretty good, but you need to be engaging at long range (i.e. snipers). I was using teams of 1 thief assault/infiltrators backed with 4 sniper/infiltrators for better coverage around the globe. It’s much easier to lose stealth with only 75% (especially with worms) so you absolutely will want the re-stealth talent on those. You DO NOT automatically lose stealth when firing with 75% stealth; as far as I can tell, firing has no effect on whether you are spotted, just whether or not you are in perception range * (1 - stealth).

Iconoclast technically has better maximum damage potential than Mercy, but is somewhat shorter range, harder to get a hold of, and more expensive. Mercy is extremely easy to get and is arguably overall better anyway. The best weapon though for assault/infiltrators is the Gorgon’s Eye PDW if you can get the PDW/pistol trait, as it lets you actually gain AP since the Gorgon’s Eye does absurd damage for 1 AP (and has a huge clip). That combo basically lets you clear many maps in one turn with Rapid Clearance/Dash (can essentially one-turn the first room of the last mission - on legendary - once in position).