There’s no real difference between them to make the choice interesting. Rockets fire in an arc like a throwable (grenade) and explode on the ground like a grenade (perhaps this animation is placeholder though).

It might be more interesting if they had some differences… if they had different firing trajectories for example, throwables would be suited to throwing OVER cover (cover would not impact LoS heavily, plus the explosion would not necessarily remove the cover either)

…and rockets would be suited to firing THROUGH cover (and destroying cover) as well as doing damage to big targets by targeting their upper extremities (cover would affect LoS and/or absorb some damage due to the flatter trajectory compared to throwables).

And of course the other glaring thing about grenades and rockets is they are 100% accurate, which pretty much makes them broken. There is no way to rationalise having throwables and rockets that never miss a target when all other attacks in the game can miss (bullets/melee).

In UVs last stream he confirmed that Grenades in the final game will not be 100% accurate, im assuming that means rockets also.

Rockets definitely have/will/should have a much higher range than hand-thrown grenades, plus they should arguably be at least somewhat more accurate than 'nades, and they can carry a bigger payload to boot.

Please always bear in mind that right now we are playing a pre alpha-stage build with the very first iterations of gameplay – there is no balancing and no final design even remotely included in builds this early.

Range on the rockets is definitely a disappointment. The bugs did not seem to be so limited with their equivalent weaponry, I was (briefly) saddened to observe. Then the building I was in blew up, my last soldier with it.

Would also be cool if you could do trick throws with grenades, bouncing/deflecting them off surfaces.

Yes, some actual physics would definitely make the throwable mechanic interesting (and somewhat skill-based). You would have to judge how far it would carry (from the target point) and you could use the terrain/environment to help control where it lands. I’m not sure about the whole ‘grenades always explode on impact’ thing either.

Grenades could have multiple modes: timer (up to say, 5 seconds, player selected), and impact.

The ability to roll grenades in addition to lobbing them would be great too.

Trick throws, rolling grenades? Very cool ideas! Rolling could be used on shorter distances, especially when soldier stands above the target (so standard throw coudn’t work). But trick thrown grenades could sometimes handle this as well.

I agree that having granades “bounce” against surfaces and/or roll would make them a more interesting tactical choice - distinguished from rockets in a meaningful way.

Throwing arc makes impossible to use grenades indoors. Perhaps an underhand throw or an option to roll the grenades in future builds/fimal game would help.

I was surprised that rocket shots had an arc to them. I think they should keep that but apply it to some type of artillery piece and change the rockets to the straight line shooting we are more used to.

I would also like to see different firing patterns. At the moment the rockets are more like mortars, going up and coming down in big arcs. By all means, we could have mortars too, that’d be useful, but I feel like rockets should fly straight so that they’re more useful for hitting enemies high up or under a ledge.

Perhaps some upgrades in the rockets could allow them even more flexibility. Like boring through cover to blow up the enemies behind, or having it remote controlled so it can fly around corners, following a player chosen flight path, before exploding.

Rockets definitely have/will/should have a much higher range than hand-thrown grenades, plus they should arguably be at least somewhat more accurate than 'nades,

Mind that existing logic and mechanic from Laser Squad up to date was:

Both LS, UFO:EU and TFD had high explosives, lighting markers and sometimes few more types of various explosives and rocket charges too (Armour piercing or heavy explosion rocket?). I miss those heavily and hope will be re-introduced. 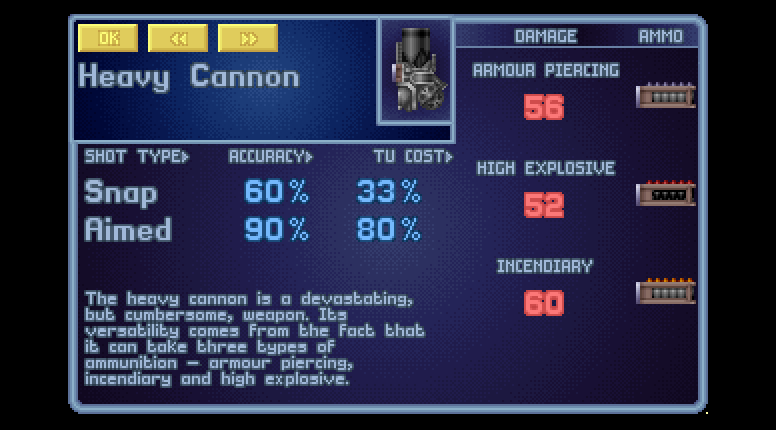 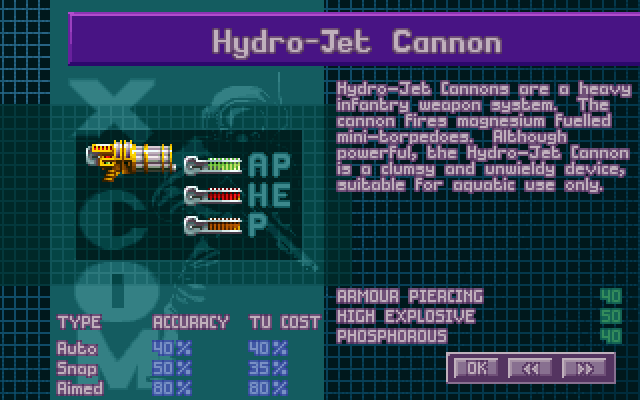 Difference between Auto and Heavy Cannon explained in Wiki.

A weapon of quick kill since Laser Squad.

By all means, we could have mortars too, that’d be useful

An 8 lbs, 50mm, single person mortar from WW2. Something similar could be designed for the game

Seeing a lot of great ideas here. The ability to bounce grenades around corners, or rol them sounds great. While we are on this topic. Maybe add mines or a tripwire function to the grenades. I reckon there will be multiple types of grenades as well. How about a sticky grenade or a grenade that reveals stealthed enemies by spraying them with paint/radioactive isotope or something?

Oh yuck, the image of a tandem warhead rocket hitting a crab…sushi anyone?

my favourite weapon of all time.

All these ideas sound great but they might make the weapons very OP. For a bit of fun, I tried running three technicians, with three firecat nade launchers, with an armadillo. I have to say, great fun clearing maps… but puts the game on easy mode. Smashing crabmen, the second they spawn, is great for the laughs but if the launchers were MORE powerful… the laughs might (eventually) stop. Maybe.

There are several ways to counter this of course. The easiest is, the enemies you face adapt to what weapons you enter the map with. Or just multiply numbers.

I hope they find a way to make it work… and it involves loads of extra enemies per map… and the possibility of us finding an auto cannon… with explosive heads on the globe. Then my mad manicial laugher can continue, as bits of crabmen fly across my screen!

Honestly, my 2 cents is that I liked the Xcom result of losing various resources by using explosives. I find wild misses with explosives to be really irritating. It really undercuts the story you’re making about your hardened team when one of them rolls a grenade out at his own feet.

There are a lot of ways of discouraging explosive usage without adding randomness. Other than destroying potential resources another idea would be drawing out more enemies (it’ll need an accompanying screen indicator so people know they’re drawing more from around the battlefield with the commotion). The bottom line is that an uninformed decision is not a decision, so the potential outcomes of the explosion need to always be clear.

There’s airbursting grenades as well, just by the way. I agree that grenades/missiles should be nearly as subject to randomness. For one, people using explosives tend to be a hell of a lot more careful with where it’s going. Rockets typically won’t even arm until it’s a certain distance from its firing point. And dragging yourself tends to have a far worse effect than a rifle miss, which adds extra frustration if RNG is an element. It’s one thing if it’s at a distance (I. E. You know you’re throwing it too close to a mate, and there’s a chance it’s going to be off target enough to hit him, too, and thus it’s an informed risk) VS. It fumbling to 2 feet in front of the thrower as well.

Please note, I haven’t actually run into any of that, just speaking theoretically.