I have the classic Epic version (not the Year One) with all the content (with living weapons and DLC’s 1-5, I was a backer).
Until yesterday my game on Epic was showing that I own all five DLC’s. The DLC4 and DLC5 was in add-ons list, but inactive as it should be. After the recent changes to solve problems with FS not appearing for some users with season pass (not my problem), the inactive DLC’s were removed from my list and are currently missing from my library, so it appears, that I own only the three currently released DLC’s, but not the future one as was common till today.

This is confusing, because with Epic it is not sure, whether it is a bug, overlook, intention or what… - and the information what is included in my game or owned, is changing with the wind - it should be stable thing…

Are you logged in to the proper EGS account that has ownership of the game and season pass? How to Verify that you’re logged into the correct Epic Games account - explanation by Epic: LS-0021: Your account doesn’t own this game - Epic Games Support

Are not the add-ons disabled in the manage add-ons section? How do I manage DLC in the Epic Games Launcher? - Epic Games Support

If you are an early backer (before March 2019) you are eligible for 2 copies of the game. If that is the case write an email from your backer email to contact@snapshotgames.com and we will give you a Steam or GOG key depending on your choice.

Thanks for reply,
I’m using EGS account through Epic launcher and I’m early backer. The addons was correctly enabled and the representation was the same as before after downloading FS DLC. The changes of the DLC count and display appeared after there was fix for the season pass (for YO edition) announced.

I have my second key for Gog, so sadly no FS yet on that platform. 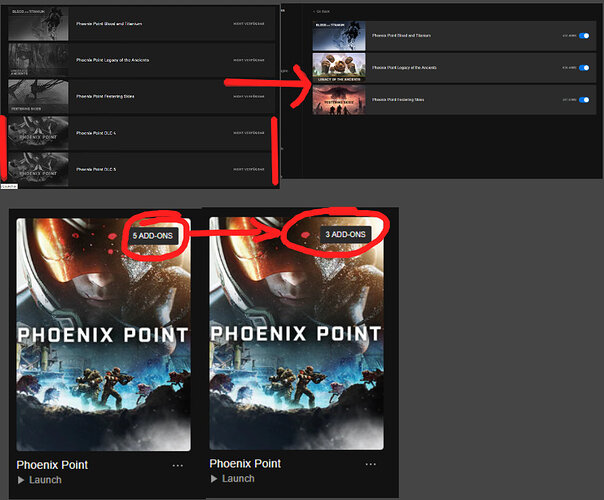 I can confirm this, I have also the base game (not YOE) + season pass, before the update it states “5 ADD-ONS” and now only 3, but including Festering Skies.

But I assume it has something to do with changes on the Epic front how they handle the DLCs, there was a bug that FS was not accessible for YOE + expansion pack that seems to be solved.

At least we will see what happens with the next DLC, but I’m pretty sure there will be a solution for all early buyers of the “old” base game + season pass.

Its likely just a cleanup of how the DLC looks

Looks like you’re a backer from BEFORE March 2019. If so, then the EGS key you have will automatically add the DLC and it shows Festering Skies like it should

The removal of the 2 other is again likely a cleanup issue. You correctly got Festering Skies so you’re likely a Pre March 2019 backer. It just means when DLC4/5 comes out, i’ll get added automatically when the DLC comes out as well

I’m not a backer, I bought the game after release in December 2019 on EGS, the season pass when B&T was released and shortly after the Living Weapons Pack. But yes, it should be the same as what early backers have got (except the digital extras).

And no, I don’t bother whats giong on. I assume I will get all the DLC that I bought with the season pass as soon as they are released as I also got FS now. Only the UI in EGS library changed from 5 Add-Ons to 3 Addo-Ons and that is currently no problem, just a bit weird