I just read the announcement where you take the decision to drop Linux support, and I really don’t think it was the right idea. As someone who has been involved in the Linux community for many years, and considering you are still supporting OSX, I cannot avoid but feel like you are making this decision based on many misconceptions on how Linux works.

One of the main points you mention for dropping Linux support is the lack of a standardized distribution and driver set, making testing a living hell since you would require a high number of setups. This is inaccurate, and misrepresentation of how Linux works, since the approach all developers take is to support only one standard distribution. Most game developers pick Ubuntu as their standard distribution, and any problem that might emerge outside that distribution isn’t the developer’s problem. That also gives you the benefit of supporting specifically the driver set in that distribution or to specifically support the proprietary drivers provided by the hardware manufacturer.

Finally, I think we have to address the elephant in the room. OSX support. OpenGL support on OSX has been way behind the one on Linux and Windows for years, and this has actually lead to some Linux native ports missing shaders because they were not supported on OSX. Furthermore, OSX is completely dropping OpenGL support, and the only way you could support your game on OSX is creating an actual Metal port, and probably the best way to do that is creating a Vulkan port, which is an API supported in Unity, and let MoltenVK do the rest.

With that said, I’m not part of development in your game, and as such, I don’t know what drove you to drop Linux support. I don’t think anything I have said could change your decision, since I’m 100% sure dropping support on this platform wasn’t an easy one to make, but I still wanted to express to you my thoughts on this whole ordeal. 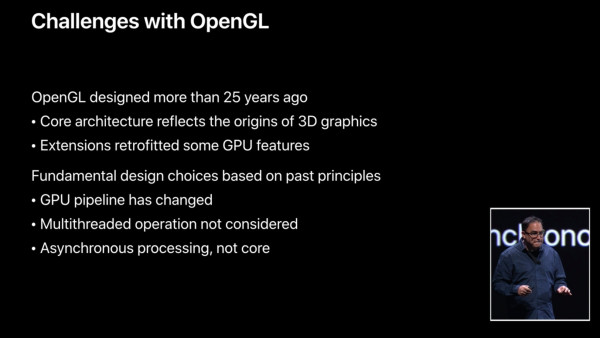 MoltenVK is a software library which allows Vulkan applications to run on top of Metal on Apple's macOS and iOS operating systems. It is the first software component to be released for the Vulkan Portability Initiative, a project to have a subset of Vulkan run on platforms which lack native Vulkan drivers. There are some limitations compared with a native Vulkan implementation. MoltenVK was first released as a proprietary and commercially licensed product on July 27, 2016.

And this was different in BB1 and BB2? Sorry but these are not new things that came suprisingly on the table in the last days.
these are things that could have been known before promise the linux client.

We promised a Linux client long before Backer Build One. Yes, we had the same issues, though Backer Builds 1 and 2 were much smaller and less complex builds.

yes. and you should have known from the beginning that you will have to handle three different apis.
directx for xbox and windows, opengl or vulkan for linux, and metal for macos. so I can’t understand why this is a surprise.

To be fair it wasn’t known until June that OSX was dropping OpenGL entirely. Although, it doesn’t really come as a surprise considering Apple has been moving to Metal for a long time.

I think the main problem was sticking to OpenGL when the entire industry is moving away from it and adopting Vulkan instead.

the vulkan renderer worked in bb2 on linux and only some light shaders did not work.

That’s why I think they were too soon to announce they were dropping Linux support entirely. Snapshot has to either drop OSX too, which would’ve been better if they would’ve done it in the same announcement, or they have to adopt Vulkan in which case dropping Linux wouldn’t make much sense.

I guess it’s time to just wait and see.

monday we will see.
when the mac BB3 still uses OpenGL then this is stupid. on mac only the very old OpenGL 4.1 is supported. On Linux Unity can handle 4.5 what brings more posssibilitis to it.

and btw. if I look at some recent games like Two Point Hospital or Leisure Suit Larry Mac users have a lot of Problems with unity games, too. (mostly because of different os versions)

Fully agree, very strange decision also from a technical perspective.
I think it’s completely unfair to advertise with Linux support and then you just drop it.
Therefore just refunding is not good enough, please give us some better options, by adding something. Are you supporting steam play/proton?

We will be looking at the possibility of future Linux support after release, but are making no promises at this point. Hence why we are giving full refunds.

You may believe it was “unfair” for us to advertise Linux support. However, we did fully intend to support it. In the end, we were over ambitious and bit off more than we could chew. We made the announcement as soon as it was decided, we were transparent and clear about the reasons why and offered full refunds without question. We’ve taken the PR hit for it, and we knew we would. We still believe this was the right decision for the studio and the continued development of Phoenix Point.

I think supporting Linux after release is a very good decision. It’s difficult juggling hundred things to be usable while still in development, but it should be easier afterwards.
No Linux support is not a dealbreak for me (and I won’t be opting for a refund), but it was a big part of why I supported so eagerly and with a larger amount than I would have otherwise.
Honestly, I don’t understand you opting for OpenGL and DX (and possibly Metal?), when Unity supports Vulkan. And Vulkan works on Win, Linux, Mac (MoltenVK) and, hell, even Android. Could we get a response of why Snapshot opted for this fragmented solution instead of a multiplatform one? @UnstableVoltage
Another possible venue for Linux support would be a deal with Feral Interactive after release, but AFAIK they create another layer calls have to go through, and that seems a bit dumb, when you can get the same from Unity directly. They always did a good job though, as far as my experience goes.

They probably didn’t go with Vulkan because probably most of their developers were not that familiar with coding in that API. Yes, they are using Unity and Unity supports Vulkan, but if you are expecting to depend only on the Unity editor you will be very limited. You also need to know how to code in that API, especially, if you are planning on making optimizations. When development of this game started Vulkan was very new and Unity didn’t even supported Vulkan until the end of that year.

In hindsight, the decision to go with OpenGL wasn’t the correct one for their plans on releasing the game in OSX and Linux, but they couldn’t possibly know it at the time they made that decision. OpenGL was left behind way too fast. They probably wouldn’t even had promised those ports if they had knew that at the time. Asking your developers to work on a new API can be very resource consuming.

I don’t agree with the hindsight. Having 1 multiplatform API or 2-3 separate (2 of which are proprietary) seems like a clear-cut decision from the beginning. If I promised a multiplatform game, I would hire people who knew said multiplatform API. It’s not like they needed to build around a legacy codebase, they started fresh. Not saying current hires are incompetent - the game IS awesome even at this stage. But with raising 150% of the goal and moving release one year behind, it would be great to make use of it.
I also don’t think OpenGL was “left behind”. I’m not familiar with Mac, but with the efforts of Valve and AMD, graphics stack on Linux is in a great shape.
Well, regardless of reasons, what I wanted to say in the end is that Linux support is important to me and I would be willing to wait even longer or raise my pledge to get it.
BTW, anybody knows how long it took Croteam to add Vulkan renderer? I don’t remember, but I think they were done with it fairly quickly.

One factor that doesn’t seem to be considered here is user-base. We could indeed overcome the issues we’re having with Linux - we’re not saying that we can’t.

However, resolving these issues costs resources (development time and money). This is compounded by the fact we release builds every 2(ish) months on all 3 formats. Our confirmed Linux users make up less than 1% of our customer base. If we took every dollar that the studio has received from Linux users, it barely covers 1 day of running costs and salaries for the team involved.

We have said that after launch we will revisit the Linux situation and look into the possibility of a port. At this stage, the game will be finished and we won’t have to keep testing and bug-fixing multiple builds every couple of months.

When we took Phoenix Point to Fig, it was a smaller project with a smaller budget (due to be released around this time). As the project grew in budget, and it scope, it became more and more complex, making resolving Linux specific issues for such a small user-base even less economical.

Our biggest mistake here was to promise Linux support from day one. It was something which we very much wanted to do, given that our Linux version of Chaos Reborn was well received. Chaos Reborn was a much smaller, less complex and niche game with a smaller budget. We also didn’t have to roll out bi-monthly backer builds on all formats.

We regret the decision we made to promise Linux from day one as much as we regret the decision to pull support. It wasn’t one that was made overnight. We considered our options carefully and were always left with the same conclusion - we don’t have the resources to support a dedicated Linux build for -200 people, not at this stage of development. Trying to do so would have us not only disappointing Linux users, but potentially having a negative impact on development for the Windows and Mac OS versions too.

Within a few days of the final decision being made, we included our announcement to backers and offered our Linux users a full refund, without question, without hesitation. We know that some of you would just prefer to have the game we promised you (we’d prefer that too), but it just doesn’t work for us right now.

Many crowdfunding projects do not offer refunds, even those who fail or who are unable to meet their campaign promises. The moment it was decided to cancel Linux support, we instantly said we would happily issue those refunds so that Linux users are not left out of pocket.

I’m closing this topic as there isn’t really anything else to add. We have made our official statement and I have further elaborated on the details. We aren’t looking for possible solutions to the issues from Linux users (we already have an inbox full).

Should the future situation change and we are able to deliver a dedicated Linux build, we will do so enthusiastically and make an announcement. Until such time, we thank you for your support and apologise that we let you down.