I just installed the game and started the tutorial but as soon as the cut-scenes were over my camera moved to a corner of the screen, i can only use q&e keys to rotate the camera but as soon as i do the camera moves to left top side automatically always…
Please help me figure out why, this is the only game that does this.
i tried ticking the free camera option in the settings and that changed nothing…
Is this a tutorial bug? I watched you-tube videos and the people had no problem with camera on tutorial levels.

try to disconnect any other peripherals than keyboard and mouse

I also have the same issue sometimes where the cursor will disappear and I will not be able to to move my units.

To solve this issue I learned to hit the ‘ec’ key and then return to the game. Or just save the game and go back to the game after saving which may not be a bad idea anyway.

It took me a long time to figure this trick out, and do not know why it continually happens. I have to use this multiple times during a single battle.

i’ll take a shot saying you have an hotas controler. If so, it’s an old bug that is here since baker build 1 as far as i know. We must unplug it in order that don’t happen.

You can also try disabling the “use controller” option, if you’re not using a controller! 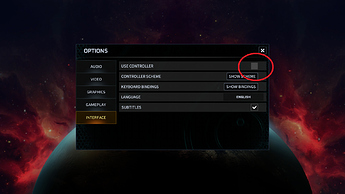 So disabling controlers in games don’t fix it x)