Best assault rifles. Which are better

So I’ve recently created a conundrum in my head with assault rifles. I don’t have the game in front of me, so I will just use general terms.

I’d always considered the upgraded NJ armour piercing rife (yellow) to be the best. It pierces armour so does more damage. 30 piercing I think.

However, the the standard Phoenix assault rife can shred armour, but just 1 per round, but can be 6 per attack/burst.

Whereas the Synedrion equivalent has superior accuracy.

But with armour becoming very thick (I’ve seen up to 80 on a Scylla) which is the best choice? Is it better to shred armour for the long game kill or pierce for the fast kill, but then be harmless against thicker armour? Whereas better accuracy provides better long range killing.

If a round can’t penetrate armour, are viral rounds still effective?

Best choice not to use AR since mid game

as a stand alone weapon, I think your assessment about the piranha being the best is probably correct. however…it deals the least raw HP damage to targets of whom the armor is stripped. (30X5 I think), and generally AR’s are used post stripping a target with cannons or explosives

the ARES, the PP standard assault rifle is 30X6 with shred 1 at an effective range of 25, it has 6 burst of ammo in its magazine. is overall a better weapon if the armor is stripped.

deimos the synedrion AR is 30X6 with shred 1 at range 41!!, 6 shot burst with 10 bursts in the mag is just flat out better then the current ares

bulldog the NJ standard AR is 40X4 with shred 1 at range 20, 4 shot burst with 6 in the magazine, it has a very narrow range of armors where it is better then the ARES or deimos. but its awful accuracy makes it my least preferred rifle to use.

a viral round needs to deal at least 1HP worth of damage to apply the viral status.

I use AR’s throughout the game, while they don’t deal as much damage as a shotgun blast at point blank range, they can usually tag enemies from further away. the deimos is my AR of choice, a high damage per AP with very good accuracy and magazine efficiency, I use AR’s in combination with heavy shredding, meaning that I usually shoot at unarmored parts of the enemy

I tried every combination, Piranha AR-51 included, and I use Deimos + Shotgun for every assault soldier.

Ares is fine at the beginning, Bulldog is worst of AR , and Piranha is close range in my opinion, If I want to stay so close I go for dashing + SG

Since Leviathan update, Shredding 1 was added to AR, Viral is interesting for Mutogs and maybe Scylla in my experience

I use AR’s throughout the game, while they don’t deal as much damage as a shotgun blast at point blank range, they can usually tag enemies from further away. the deimos is my AR of choice, a high damage per AP with very good accuracy and magazine efficiency, I use AR’s in combination with heavy shredding, meaning that I usually shoot at unarmored parts of the enemy

So this is all about mindset. Since the change in movement points is changed, ranged attacks with assault rifles make a lot more tactical sense. I’m enjoying the game more because of this. The new balance is making me more subtle choices.

Makes more sense to use. Strangely I’ve always ignored it because I had the perception of Synedrion weapons as being slightly underpowered, but more accurate weapons. Clearly not the case.

Danforth didn’t change a lot for me, I tried to set restricitions, one of those, max speed 20 , before,

I would add to what @conductiv wrote that, Bulldog and Piranha are better against medium+ armors if for some reason you can’t shred armor (so your heavy or berserker are mind controlled or they panic and turrets don’t have line of sight at current target).

But if you plan well that shouldn’t happen.

I’m a big fan of ARs, because they offer the best damage per AP/accuracy combination. I favor the Deimos and the basic AR because they have higher accuracy. The problem with Piranha is the low accuracy, which means you have to be close to the target. But if you are close to the target you can aim at the body part with less armor, so you might be better off with a Deimos anyway.

Another thing to consider is that there is a bug that increases armor shredding, making all the ARs except Piranha much more useful. Laser Rifle armor shredding

As I said , Deimos AR is a solid choice, if you can access through reverse eng. asap even better 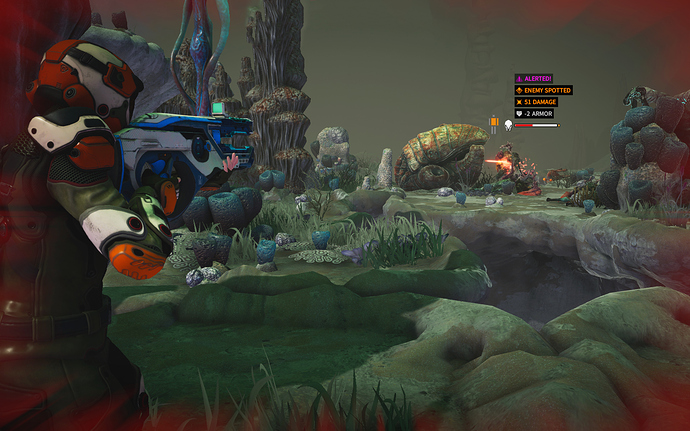