I think we all agree the Auto Turrets are one of the most OP ingame with huge damage for 1 AP, mainly the Scorcher AT. I suggest to reduce their burst to 6 (from 8 of NJ turrets and 10 from PP turret).

This mobile turrets that take 1 place in backpack have more firepower then the turret on NJ vehicle. Funny

Armadillo can be a safe place for 4 squaddies and has 10 x more HP and around 3 x more armor than a turret. Funny.

This comparison makes no sense, but I agree that turrets, or better the usage of turrets for 1 AP is pretty OP.

Solution?
Nerf turrets and / or the 1 AP remote control usage.

Then we can look how good turrets are when their usage is not longer so easy as it is right now and their overall damage values are reduced.

Armadillo can be a safe place for 4 squaddies and has 10 x more HP and around 3 x more armor than a turret. Funny.

It was just supposed to be a comparison between the turrets, as I also wrote. Not vehicle itself.
No matter: I think your suggestions are good.

One might ask why after a year it wasn’t “so noticeable” that turrets are “OP”? So for me the turrets only became “OP” after the patch when the control went completely to the player. Before “Remote Control” was also strong, but on the other hand the turret AI also made nonsense (e.g. wrong opponent selection, or friendly fire). This AI nonsense didn’t make the decision to turret completely as trivial as it is now, as there were also disadvantages. I don’t mean to say that the disadvantages should come back, just that something should be readjusted “now” in terms of firepower.

It was this “take 1 place in the backpack” that triggered me because with it you already opened the door to compare the entire turret with the entire vehicle. In my opinion, the armadillo has advantages and disadvantages, and its weapon doesn’t seem to be in the first part to me, but it is more than compensated for by what I’ve written.

Anyway, there is nothing to argue about here, we are on the same side

Remote Control only usable once per turn and for 2 AP.

I think it’s OK to leave it at 1 AP cost and limit use per device. So a Technician can use manual control on 2 turrets, but 2 Technicians can’t use same turret twice.

The Advanced Laser Technology (Scorcher AT, Gonrgon Eye PDW, Destiny III mounted laser) should be gated behind Advanced Technician Weapons (Enforcer PDW, Rattlesnake AT) and not right with the base Technician Development (Technician, Defender PDW, Watcher AT) research.

Reducing the damage of all turrets (35 for NJ and 50 for Scorcher) and the burst of the Scorcher also to 8 per shot (same as Armadillo).

Anyway, they do need a nerf

I think it’s OK to leave it at 1 AP cost and limit use per device . So a Technician can use manual control on 2 turrets, but 2 Technicians can’t use same turret twice.

Maybe yes, combined with the general damage nerf, why not. Needs some tests

did you guys ever have to reload a turret?..I have a feeling the turret gets refilled vehicle style even though it has “constructed” ammo.

There is no ammo after mission needed, reload is for free, so it is the same as with vehicles.

Just make them like vehicle turrets, two firings per turn? Why the difference if their basically the same?

On their own they can fire 2 times per turn, so there is no difference to the Armadillo turret.

And a Technician can also fire the Armadillo turret with Remote Control for 1 AP until it is empty, again no difference (except it cant be reloaded).

Scarab is hard capped by firing once per turn, because it has a rocket launcher.
Aspida is special but can also fired/zapped by one or more Technicians for 1AP multiple times per turn.

rather than four times with remote operation.

Edit: If you limit to one turret per technician, each additional turret adds 1 x 10 x 60 = 600 potential damage to the equation.

Edit2: Correction, see below, they can only soot once per turn for 4 AP.

On their own they can fire 2 times per turn, so there is no difference to the Armadillo turret.

I’m pretty sure they only fire once on their own.

Hmmm … imo 2AP per shot, but I have to admit that I mostly shot with the Technician 1 AP remote control.
@etermes has more experience with turrets, maybe he has an answer, otherwise I can test it.

If you use remote control during PX turn, and you don’t use the bursts, it stacks,
next turn that turret can use twice on its own.

There are not limit for exploit, you bring a technician with a lof WP, and remote control is only restricted by those WP (1 AP 3 WP per use), assault using onslaught grants two more APs, with more technicians is a party.

Ammo never is a problem, I never ran out of ammo, Scorcher AT is amazing and super OP,
I have to use one max. and only in specific missions.

I’m pretty sure they only fire once on their own.

You’re right, they can only shoot once per turn for all 4 AP: 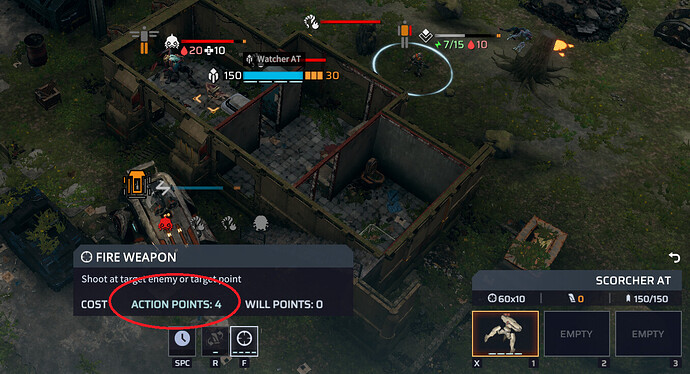 Unless, as etermes, mentioned; the tech remote controlled the turret on the previous turn and it was not fired. It can now do 2 shots on the next turn.

It seems we all are in agreement with this overpower… you know if the developers of game are aware of it and if they will do some change in a future patch?

The turrets may look overpowered in theory. But in practice whenever I place them Pandorans end their turns behind cover, so that the next turn my turret has no targets to fire. So I have to pack it (for 2 AP) and deploy again in another place (1 or 2 more AP).