Allied with all, can't do final mission for any

I worked long and hard in my current playthrough to keep alliance status with all the factions.

However, when i get to the point where I do their end game faction research… the last step where I choose which final faction’s method to use… never appears.

only the phoenix point option.

am I missing something?

I did the same, every faction being allied,

but I think first final mission locks the others, in my case Synedrion 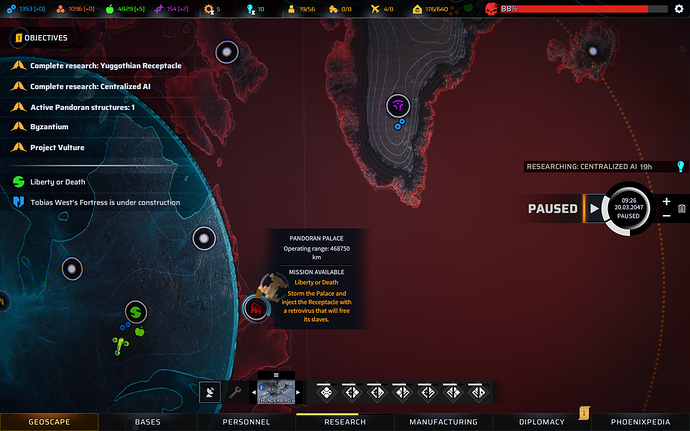 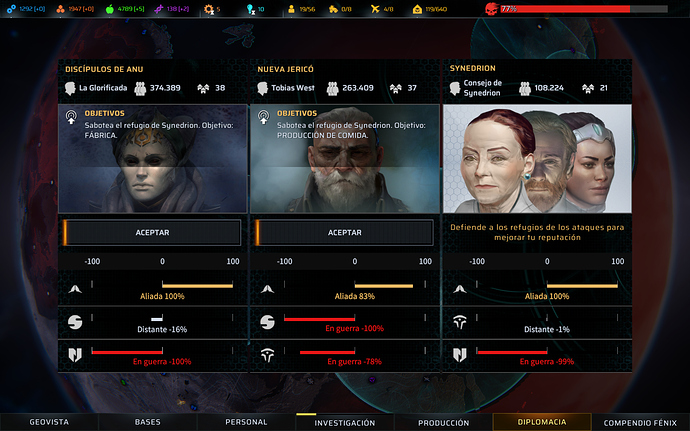 Have you completed all the research available? Some Pandoran research for my playthrough was necessary to enable the final missions.

only thing on offer is to break alliance with all factions for the virophage ending.

Out of the endgame researches, which if any show in your list of objectives?

Which ever research gets completed first, locks the endgame (whether it’s completed by the player or the faction).

Oh. So I one wants to ally with particular faction, they should avoid reaching too high familiarity level with other factions? What’s the max level with out triggering possibility of endgame - third mission?

I believe it is the Special Mission after the 3rd for the faction. Check out Sheepy’s Tech Tree.

@ichthyic You might find your solution by checking your research against the Tech Tree.

Out of the endgame researches , which if any show in your list of objectives?

only option left was to research yugotthian receptacle, and then after that was offered virophage.

still allied with all factions until started researching the only thing on offer… virophage.

oddly never got any near endgame research offered by anu, even though still allied.

I finished moon prep, saw nothing, so started on new jericho

but, if I go back and DON’T start on new jericho, but just waited a few hours doing no research at all, THEN the moon mission base is “being constructed” appears.

so the problem was that evidently you need to wait for the final event to trigger after doing any of the factions endgame researches, because launching into the other factions’ research (like starting researching centralized AI) apparently stops the other faction event from happening.

I’d say the game should probably offer a bit more info at the point where you are offered multiple endgame research choices as to what your options are and how to proceed. warning about only being able to start down one path, or something similar.

Ichthyic, I suggest you go back to that Save and press f12 to file an in-game report with this point to the devs. That will make sure it gets under their noses.

Personally, I have a problem with the endgame researches, in that there are too many unidentified and unheralded hoops to jump through. I lost my first campaign because the bleedin’ endgame never bl**!y ended, and the ODI finally ran out of time - every time I thought I’d completed the final trigger research, another blasted hurdle popped up and I had to research something else, until eventually I lost the will to live.

Looks like that gets exacerbated with multiple endgames by the Factions’ irritating habit of waiting around until they can be bothered to set you the next hurdle, rather than rewarding you immediately.

Given that the higher Difficulties have stupidly short ODI timers anyway, this is doubly frustrating.

until eventually I lost the will to live.

oddly, I think I have found that with every xcom game and clone since the original. I’m always trying to hurry up the endgame so i can finally finish, as I’ve about had it with the grind by that point. the games are always the most interesting around the middle part, and this one is no exception.

I have to say that I like the directions they are going with tactical combat, and I think this game adds something to the pantheon of xcom style games, but they need to work on balance issues and polish. there are still a few irritating bugs that shouldn’t be there by this point as well.

all in all, I figure by the time it finally hits Steam, it should actually be a pretty polished game I look forward to trying again.