Reupping comments: I have yet to successfully capture an alien successfully. The mechanic is poorly explained. Should I bash or strike? Zapping the last alien multiple times with the paralysis gun didn’t result in having the option to whisk them way to containment.
The whole mechanic needs a look

First, be sure you use a weapon with the paralizing effect (NOT stun, it’s another thing ! )

The game expect you to use this weapon called something like neurazer i guess (sorry i play in french as i’m… french :o) 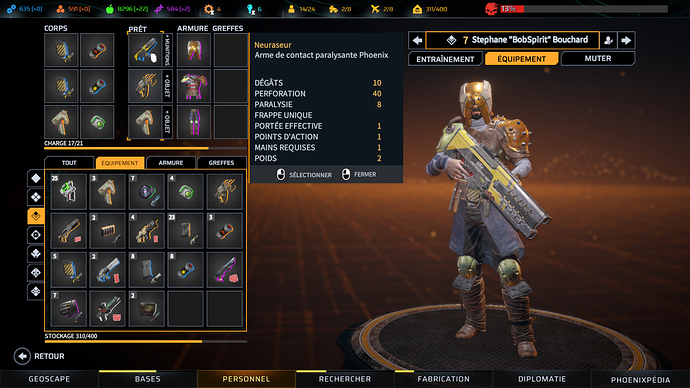 You have to put in in weapon slots, click on it (like for using a gun) going melee to the target and use the little fist icon (not the bash icon you have with other weapons).

This weapon will do 10 physical damage and 8 “paralizing” damage while ignoring 40 armor.

Note that as King said upside, you have to “do damage” to ennemy to actualy apply the paralizing effect, so if ennemy have more than 49 armor (40 ignored + 9 damage, leaving 1 damage) the effect wont proc otherwise.

It should then add a green value just below ennemy life bar (the one on the map, not the one in top of the screen) that show how many paralizing point you’ll need. For a regular crabmen it’s usualy something like 8/34 at the first hit, meaning you’ll need to hit him ~5 time (4x8 = 32 so not enough while 5 x 8 will go 40 and he will be paralized at 40/34).

Note that enemy will lower his paralizy value per one per turn ! So in the exemple upside, assuming you hitted him 5 time ina single turn (using 2 dude for exemple as it will cost 5 ap), the crab will effectively be at 40/34, but will drop at 39/34 next turn, and 6 turn after he will came back to 33/34; actualy being awake (while having a big AP penality making him relatively harmless, but not able to be captured unless paralized fully again)
So if you want to capture someone and aren’t sure it’s the last one, it may be valuable to “overkill” a little and keep hitting once or two time after he is already paralized. Just… ya know, in case

Thanks, but I was basically zapping them with the neuralizer with enough to power a small city and no dice. Maybe they died somewhere along the line. Who knows. I any event the game mechanics seem awkward. I’m going to have to wait for the reload, weapon slot showing wrong weapons and weapon transfer bugs to be worked out. Game has interesting features, but I am going to give it a few months of updates and builds.

yep i somehow feel like they “rushed” a little the game release date, but considering they delayed by something like one and half year (if i’m not mistaking?) from original release date, i think they took the shot and choosed to release the game as it is, before too much people forget about it. I’m still extremly confident that they will fix bugs and ui tweaks, quality of life and so on in a reasonable amount of time^^

I hope you are right. I was reasonably impressed given the games budget. XCOM also had bugs on release and it had a much bigger budget, so there is that. I’m a big concerned about the mix of the games focus on micromanagement in a game with such massive global map with dozens of bases and locations. It might ok for the strat geeks but is likely to overwhelm casual players with detail and complexity. We shall see.

As of now, i thing Xenonaut is the game with (by far) the more complexiuty of all xcom - like games, but damn it’s a good one. In a totaly retro visual style, regardless the game is not so old. So i must say micro management of severall bases doesn’t scare me much, while i still definetly understand it’s not everyone’s cup of tea. x)

Use “STRIKE” to capture/paralyze enemies while having the “Neuralizer” equipped. Do NOT use “BASH”. Confusing descriptions in-game, I know…