When the Pandoran stops fighting me ... EDIT: and coming back at the end of the year

I wanted to see what happens if I simply let the game go after I researched anything, activated all PP bases and just don’t do the necessary missions or researches that bring me to an end.

Something interesting happens in the last months, Anu builds their Missionary Centers in many of their heavens, these “converts from other faction havens within their influence” and that pretty effective so that they are currently growing when the other two factions lose more than usual (overall population still goes down).

Currently the biggest Anu heaven has close over 74,000 inhabitants and I think it would withstand almost any attack that should coming up with their military strength of 77:

But it changes between their heavens, it seems to me that they also drain population from their own heavens. One of their other heavens already had over 60,000 inhabitants but since some time it goes down again slowly, currently this heaven has 57,000 inhabitants even if it constantly stated it would grow. I assume it looses inhabitants that “convert” to the other and bigger Anu heaven from the picture above.

For more than 2 months now the Pandorans have hardly acted at all. No new Pandoran bases are coming up, no heaven attacks from them (only Forsaken from time to time) and only once or twice per month an attack on one ancient site (seems to be independent from Pandoran bases).
So currently I let the game run with highest speed because not much happens. I will go ahead, because now I’m curious what will happen in the future. When the population is close to 10% I will end it with what ever is left, at least with the PP end.

But it’s more than strange, the Pandorans just stopped fighting me for the most part.

Update:
04.09. - since months the first nest shows up, will they now come back again?

Very interesting! So you have basically slowed the Doomsday Clock down to a crawl. I wonder how long it would take you to lose now.

For example, it would be more interesting for me to follow this topic, reading about your expectations and their implementation. Expectations versus Reality.

April, I had this: 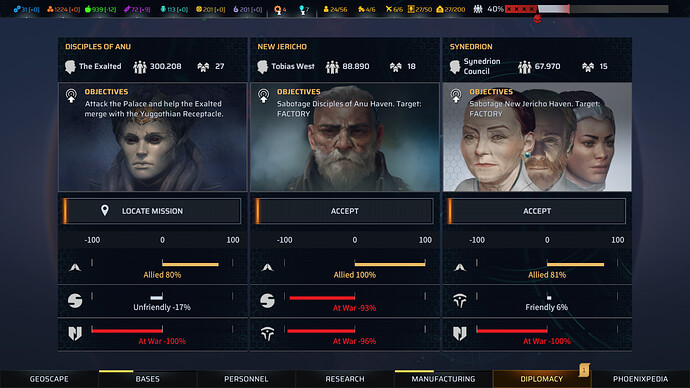 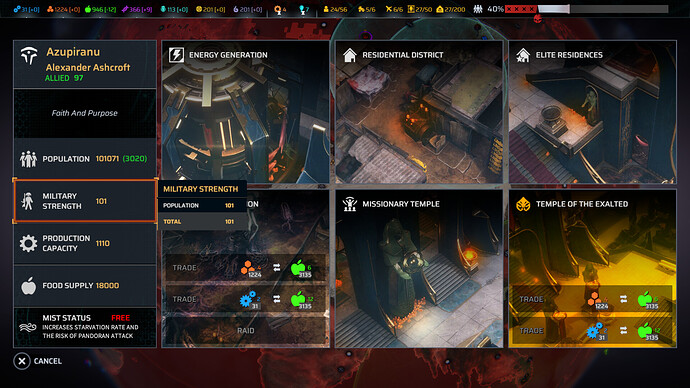 also very few attacks, and I destroyed bases from time to time

Anu population now also decreases overall, NJ and Synedrion are close to not longer existent, plenty of heavens have trouble with their facilities, some heavens are simply gone, other small ones (<100 population) are destroyed by the Forsaken very fast: 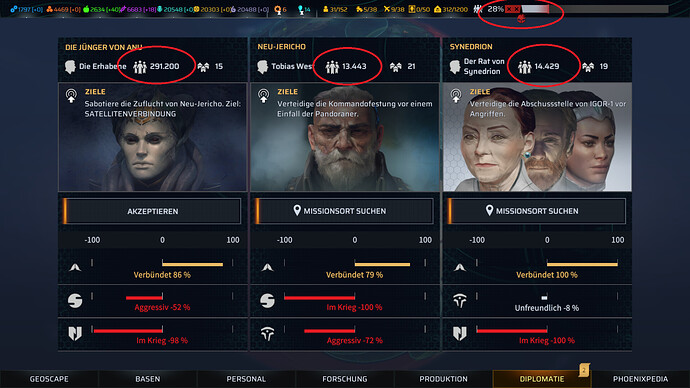 But the one big Anu heaven still grows. I’m pretty sure now, that it converts inhabitants also from other Anu heavens, because all other shrink, even when they also have the Missionary Temple: 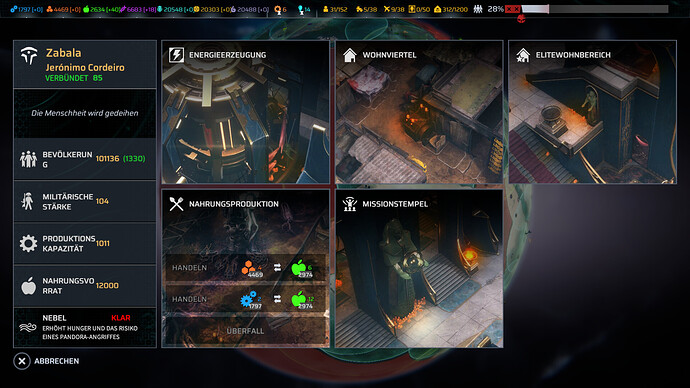 @etermes:
In my campaign the Anu heaven with the Temple of the Exalted has no Missionary Temple and is close to give up. That’s why I did this mission and also because I know that I can block the Anu end also afterwards.
The Exaltet heaven: 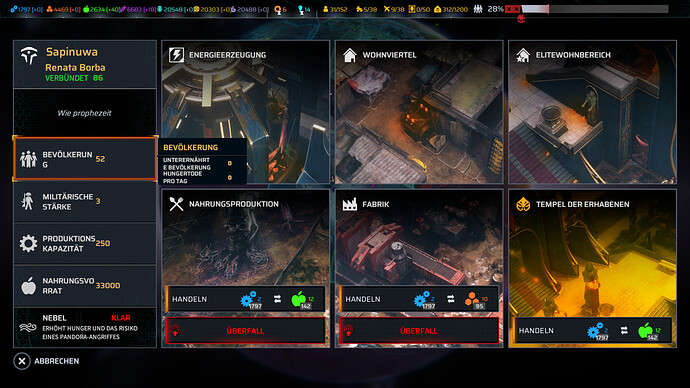 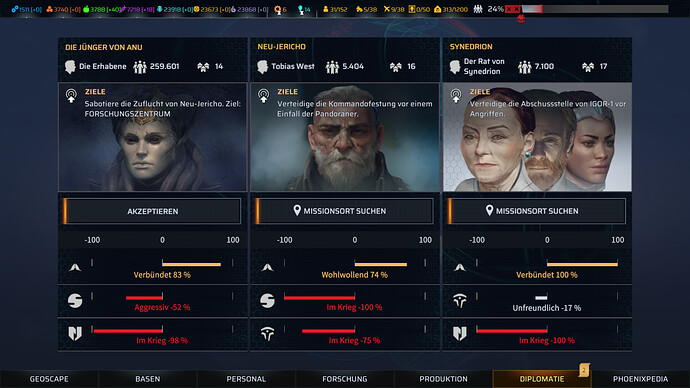 The big heaven still grows, but now much slower, currently it has 102,000 inhabitants.

I wonder how long it would take you to lose now.

I think I can reach the next year, but it could be close, 14% left to lose the game. 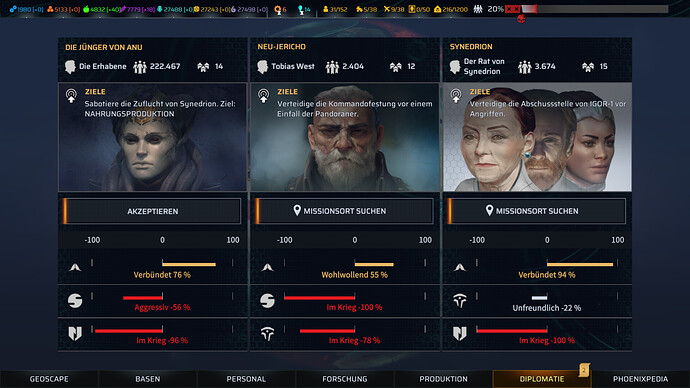 Edit:
1 day later a Lair arises, the first one since I start reporting at 20.06.2047.
All together now there were 2 Nests and 1 Lair in this time frame of 5 months, pretty poor IMO.
The Forsaken makes much more trouble and destroyed roughly 5-6 heavens in the same time, all very small ones so that I had no chance to get there in time (instant destroyed after the 4 hours delay from the Signal Disruption Tech).

Another edit:
In 4 days another 2 Nests and a Citadel showing up, seems that the Pandorans are coming back again. 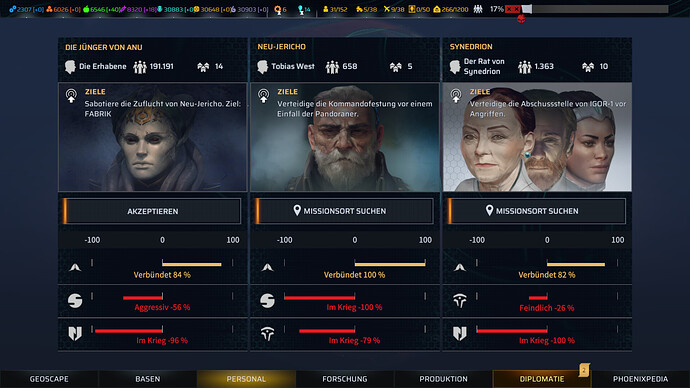 Now I’m sure that it will go into the next year. 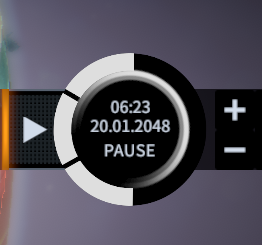 NJ and Synedrion are still alive, but struggling hard and well, Anu has litarally won the faction wars 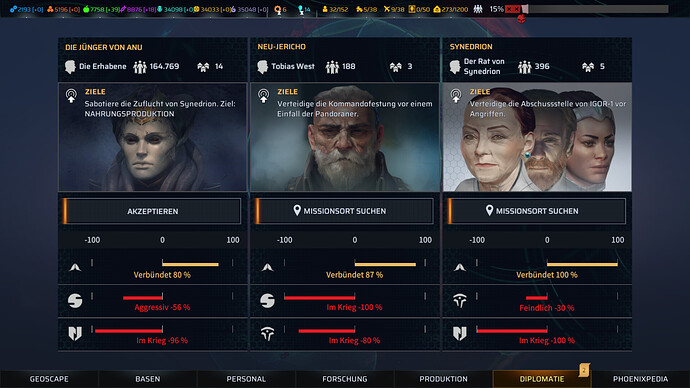 Their big heaven has still over 90,000 inhabitants: 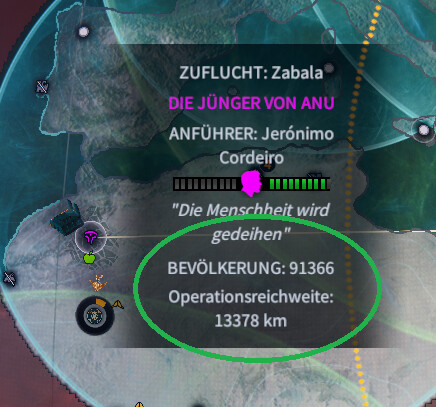 Only 2% lost this month. Overall the decreasing rate is getting lower every month and maybe I can go on for a few more months after all?
We will see …

Or the same for the synedrion people…

They were only 100 for a long time and now I did the mission, Tobias West was still there with a bunch of NJ soldiers

But NJ has no research lab left in their 2 heavens, looks weird:

Now this heaven will also die, it’s only a question of time: 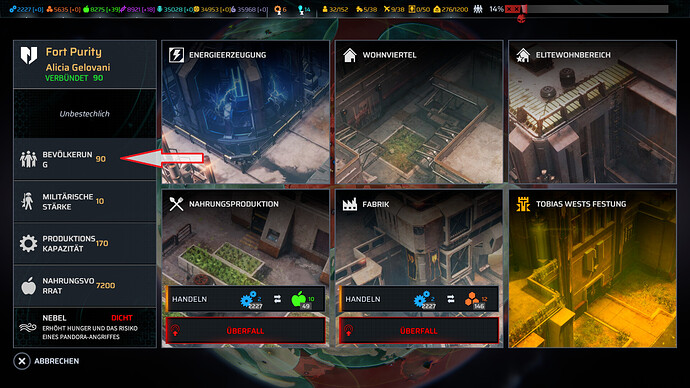 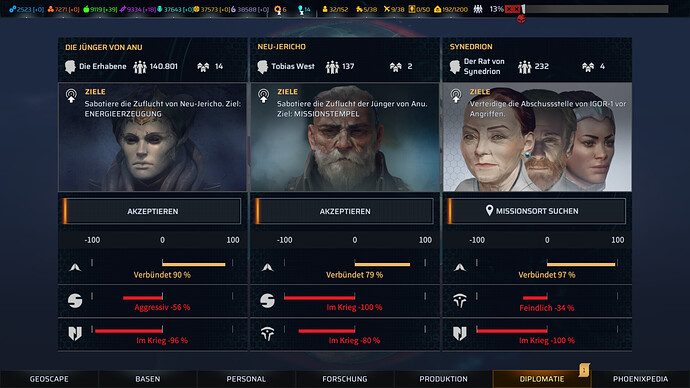 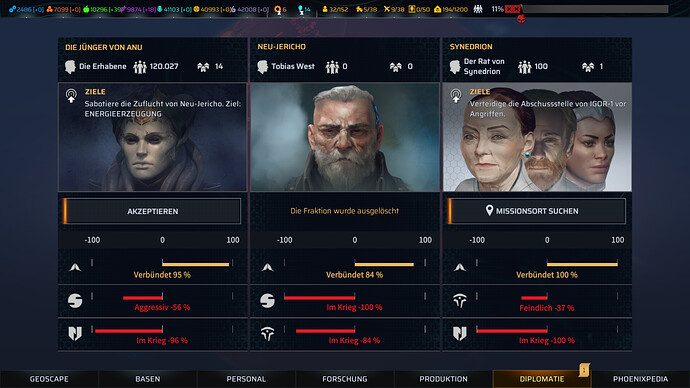 NJ is gone, Synedrion has only the heaven left with the Moon mission.

I can still research NJ ending research, what is pretty weird. I will save here and try that, but for now I just want to see if it will go for another month (I highly doubt it).

This is the end: 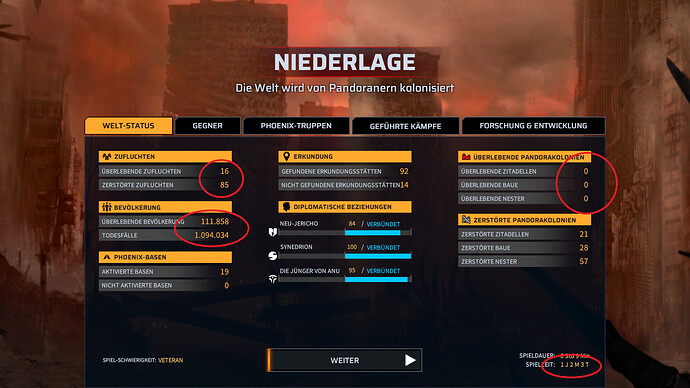 Now I will look what happens when I research the NJ end even when they are completely gone.

Very interesting. Tbh, prior to your experiment I had assumed that things would go very differently, because I didn’t take into account Forsaken attacks or the Anu missionary centre. I thought the main problem would be that Pandoran bases would keep spawning and that sometimes they would spawn outside the range of your Base scan.

So strange that there are no Pandoran bases left… Though looking at the numbers, I see that the total number of destroyed bases is exactly 106… Which is a magic number in PP, as there are also 106 POIs… It must be a hard cap.

So strange that there are no Pandoran bases left… Though looking at the numbers, I see that the total number of destroyed bases is exactly 106… Which is a magic number in PP, as there are also 106 POIs… It must be a hard cap.

As I’ve reported above there was a very long pause from June 2047 to November 2047 without any base spawning. After that 4-5 shortly one after another and than roughly one per month until the end.

I’ve now played through the NJ ending without a single Heaven left over from them.

It is weird, they are defeated but we won with them against the Pandorans.
This should not be possible IMO.

The final result page is roughly the same as with my lose, there is nothing to find about how strong the single factions were at the end, sadly.

Is it really necessary to build the logic of the game without the participation of the player? SG has balance problems With player participation.

I’ve done it again, because in my first attempt I thought there was a Triton in the last chamber with the bombard Chirons with very high HP, but I wasn’t sure. He was killed from my overwatching squaddies before I could take a deeper look on his info screen.

Now I got him again without killing him right away and he looks like a Marksman Alpha, the same as in the first chamber: 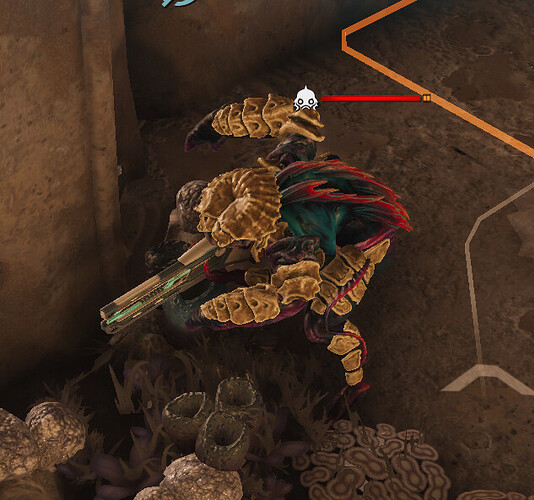 But his Info screen tells me that he is a “Praetorian” with way more HP: 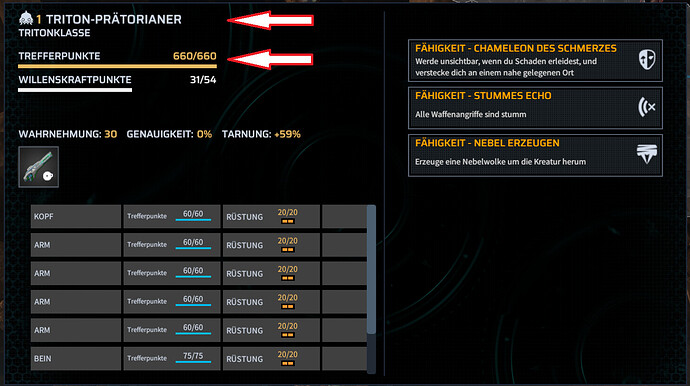 I never saw a Triton like this one before and he is also not present in the wiki.

He was also able to shoot a high stealthed Infiltrator (Edit: 90%, it was my Priest / Infiltraor, but not revealed, no enemies close by, only 2 of these Tritons far away) from very far away (roughly 30 tiles or even more) without get revealed (probably because he has very high stealth and the Echo Head mutation). Now this happened also to me for the first time ever what was reported in the other thread about the cheating AI.

Special forces for the last mission only?

Special forces for the last mission only?

Yes. There are 2 of these and also 2 Praetorian Sirens. They have been there for a while; I guess you haven’t noticed them because by the time you do the final mission you can roll over anything anyway