Hello, after two days of BB3 I would like to provide my feedback.

You should already be able to look into your inventory without spending time units. You have to spend 25% TU to move things around, but looking shouldn’t take time.

something like that. soldier should be aware of his load.
but to be honest, right now, every time I was exploring my rucksack, I was looking for more ammo, so magazines counter would solve it. but of course, later in the game I would like to know which of my soldiers got stunt rod etc…

You should already be able to look into your inventory without spending time units. You have to spend 25% TU to move things around, but looking shouldn’t take time.

It is a bug in heavy and technician inventories.

Id add that as non english native speaking, i really had some troubles finding the right bullet magazines for right guns. Yeah Pistol for Pistol, Sniper for Sniper but after that if i remember right, i was bit confused that “uhm, what ammo goes to this gun”. Naming of the guns and magz had something fishy if i recall right.

There are some visual differences for some of the ammo. Like the NJ Machine gun ammo looks like a cloth bag for a machine gun belt and the medikit ammo is a long box, not a magazine

Hi Wombut, I see your point, however, I REALLY like the fact that they added some fancy names for weapons. As a European born ‘gun enthusiast’ (I’m not ‘make America great again’, but rather ‘more kids drown in swimming pools than die from using pistols’ guy) I simply know acronyms like PDW, AR or RPG.
However, I think it would be great if you guys could add a ‘class’ property, along with damage, accuracy, weight etc (in the pop up when you mouse over the item). I think it would solve a problem for Wombut, while it would keep the spirit for guys who prefer ‘Firecat GL’ rather than ‘New Jericho Basic Grenade Launcher’.
what is your opinion?

Yeah, names are cool on guns, specially when we get more weapons to use, maybe some unique weapons in future, rare ones ect, and i think that “class” thing stating “Ammunition : xxxxxxx, yyyyyyy, dddddd” i think it was the Technician`s gun that i couldnt find ammo (or i just didnt happen to find one clip in 4 scavenging sites =)

I also like having names in there. Kings, I always felt like the NJ MG ammo box looks like a SAW ammo box, not a cloth one. 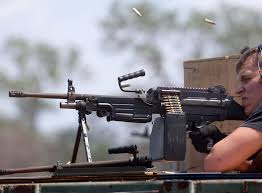 Not the best angle, but you can see the cutoff angle on the opposite side.