Things the game doesn't tell you (but it should)

I’m listing things I could only learn through trial and error, since nor the game or even its manual were able to explain. I hope this helps other players.
(Not considering the tutorial 'cause tutorials are lame, no one really pays attention and it shouldn’t be the only source of important information anyway)

about fire damage:
-it doesn’t do anything to armor. it doesn’t shred like the acid status does
-it guarantees damage to all limbs, damage = fire count -armor on relevant part. fire count max =40. 40 armor limbs are immune to fire damage.
-even though it does guarantee damage to all limbs, it does not count as a hit on every limb with regards to armor break or weakspot.
-highest damage done to any limb is substracted from overall HP.
-fire attacks tend to leave the ground on fire as well, ground fire tiles applies 40 points of fire on round 1 lowering by 10 every subsequent round, to any unit moving through it. this usually means that a unit caught on fire will take 3 times maximum incendiary damage to its limbs. (1 time from the initial application, 1 time from the start of the turn and 1 time for moving out of the fire zone)
-damage is applied on impact and at the start of the turn. so a flamethrower might hit all limbs for 40 at during the players turn, and then hit them for 40 again at the start of the opponents turn. if the opponent has no armor.
-fire zones can be cleared by blast damage.

-it doesn’t do anything to armor. it doesn’t shred like the acid status does

Weird, because that’s the opposite of what’s written on the damage info when a unit is on fire… I’m even more confused now.
All I know is I had a couple of crabmen on fire, both with low health (something around 50 HP). Fire was a result of a grenade, so they were also bleeding. Their bar showed fire: 40, bleed: 30. So I expected that meant they would take 70 damage at the start of their turn, so I could consider them done and focus my attention on other enemies. As it turns out, one of them died, but the other had enough in him to shoot me in the back.

the fire damage entry in the phoenixpedia reads as follows:

fire damage value cannot go above 40, even with multiple strikes.

A character standing in a tile that is on fire will suffer the fire damage value of the tile. this will be between 10 and 40. "

as I am reading this, I cannot say that it ever states it shreds armor, or alters the targets armor value in any way…I can say that it states that it applies its damage to all body parts, “minus the armor value” my testing has confirmed that it does just that…it applies its damage to all bodyparts, but the damage is reduced by the armor of that bodypart.

my testing has also shown me that it applies the highest amount of damage it could do to a body-part to the general HP pool of the unit that is on fire. so in effect a unit with 40 fire 30 bleed could take 70 damage…if he had at least 1 bodypart that had 0 armor.

for a use, I have found incendiary damage most effective to de-limb targets that have little armor on hard to hit key limbs (arms, head). it is more suitable to cripple, rather then kill a target with its relatively low damage (40 pnts) compared to simply shooting the target. as fire damage can cause excessive limb damage fast, it will frequently also cause additional bleeds on targets.

note that I test because not everything in the phoenixpedia is correct (viral entry is a good example, as it states it ticks at the start of the victim’s turn…but it actually ticks at the end of the targets turn), I do not know if the first sentence of the fire damage entry is correct…as it states all fire weapons will apply 40 fire damage…and they do by default…but I don’t know how they interact with damage penalties…only that they don’t benefit from damage bonuses.

I also found out that a fairly large chunk of the techs you get, don’t do what they say they do…most of the + dmg% to type (vivisections) actually seem to do nothing atoll.

I hope this makes it slightly less confusing for you.

To build a new Manticore, beyond the required resources, you also need an empty, powered Vehicle Bay on some base. You must have one separate base with a Vehicle Bay for each aircraft on your fleet. (I know, that’s X-Com basic logic, but it wouldn’t hurt to write that down on Phoenixpedia and put a reminder on the manufacturing screen, would it?)

It has been a while since i last played, but i am fairly sure a single vehicle bay can support two manticores. 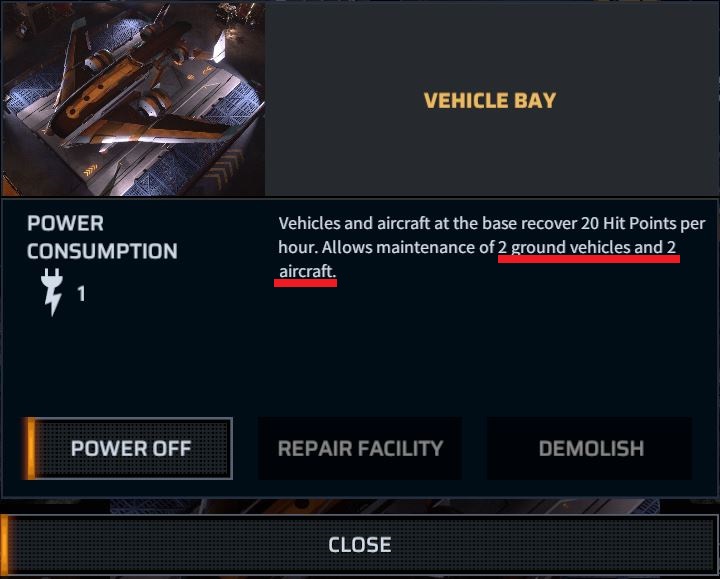 Your quote doesn’t disqualify the original comment, your quote is about maintenance, not building craft ability.

But then the game has the number information anyway, at base, at top center a yellow icon showing number of craft and max number of craft, it’s easy to make the link with building more craft and vehicle bays.

makes sense and I wonder what happen if a base get destroyed and there’s too many planes.

Well probably just something like 10/8, not a plane and full team vanishing in the air. I wonder is Vehicle Bay power off or destruction is allowed if capacity if lower than number of planes.

Your quote doesn’t disqualify the original comment, your quote is about maintenance, not building craft ability

Not sure what you mean, I can bring as many craft than I want to a base. You are making a link, I don’t know from what, certainly not the snapshot.

Maintenance is repair, isn’t it limited to two at the base? That’s what the in game information is saying, it’s not a link with max number of plan craft.

But it’s worthless arguing, but to fix the in game explanations eventually.

I checked on the aircraft build question last night by starting a new game and was able to start construction of a second Manticore with only Phoenix Point discovered and a single bay.

Not sure what you mean, I can bring as many craft than I want to a base. You are making a link, I don’t know from what, certainly not the snapshot.

However, the two are the same thing: the game limits your ability to build new craft by the maintenance capacity of your bays(you can only build as many aircraft as you can maintain). Thus maintenance capacity is the same thing as building capacity. And thus my quote does disqualify the original comment. (the original comment being, “you need a second bay before you can build a second aircraft”, which is false)

It’s possible fire destroyed a body part which had -max hp and thus it died.

If your base doesn’t have a vehicle bay the aircraft will just wait outside and not have access to any of the facility’s services.

I hate so much this inconsistant UI design, everywhere right click is close or cancel, including in combat, but in combats sometimes it triggers this crap action, even in some case where there’s some UI open.

But anyway, UI open or not, there’s a huge problem of consistency with this absurd command, and consistency is a golden rule in UI.

Imho it’s good option for someone who want to rush, just a matter of being get used to it. Actually you can hit esc to cancel an action and right click button it will cancel/close if you’re opening the main menu. I’m more concern on selecting soldiers in combat, at least give some info/glow or something which soldier we had been selected…other things would be enemy turn ‘action cam angle’, I would prefer keep the default cam angle than having great shot from different angle which lead me confuse to remember their position some time…Including fog of war, wish they are more visible than just disappear

Make it a player option then, as it is it is amateurish UI design, nothing else.

The UI and controls are atrocious in this game.
Beautiful PC design sensibilities hamstrung by console UI and controls.
It seems obvious to me that they set the controls for controller then just mapped the console buttons to keyboard. It’s horrid.
No rebinding controls? WTF?

Most of the functionality I’d expect to see just doesn’t exist here. It’s closer to the Borderlands style of UI.
Why can’t we sort our soldier list? Sort by level or class or faction?
Why aren’t a soldier’s skills and equipment shown in the list? We have to enter each soldier to see what they have. If screen real estate is really that much of an issue, then display it on the right when we have the mouse over it.

The controls and UI have been X-Butchered.

Oh, and don’t get me started on the camera control being taken away. F-ing consoles.
Come on… left click the portrait to select a soldier, right click to center. Currently, if a soldier is already selected, you can’t center on them by clicking on the portrait. Or, if you see two enemies standing together and select your grenadier, then the camera rushes off and you have to find the targets again. Then click the grenade button and the camera takes off back to the grenadier again. WTF.
Or, move injured soldier next to medic and use the last of his Action Points to shoot (with the intention of then healing the soldier). Then the camera shoots off to whatever random soldier IT thinks you should move next.
I’m used to PC strategy games where YOU get to choose what you do next.
They can keep that functionality for the console, but I’d love it if they added an option to turn off stealing the camera in the player’s turn.

I was starting to wonder if only Mac version had UI problems, or if I was oversensitive on UI problems.

My feedback and suggestions after ~20h Game Feedback

About Ambushes missions, they need some tuning, yeah the exit is boredom most often, but the number of turns seems low. For Lairs it seems they need mainly a better procedural generation that don’t generate weird setup. Myself I would focus on UI tedious aspects or bugs: Geoscape: Option to disable auto unpause. Geoscape: Fix the bug making production icons disappear. Geoscape: Fix the zoom so it’s not only min or max. Geoscape: Better 4X UI management, for example to sort soldiers, list bas…

I tried see if any element you quote couldn’t be managed with some hidden UI feature I noticed, but I don’t think so. The only point is when you select an enemy icon the cam is fixed on it, then you can zoom int and out and move the cam from this point. That how I manage grenades or figure faster some enemy position, but it’s not changing the point you quoted.