Stuck on Geoscape with no UI following base defense

I tried to use F12, but I’ve been getting an error every time I try to use it. 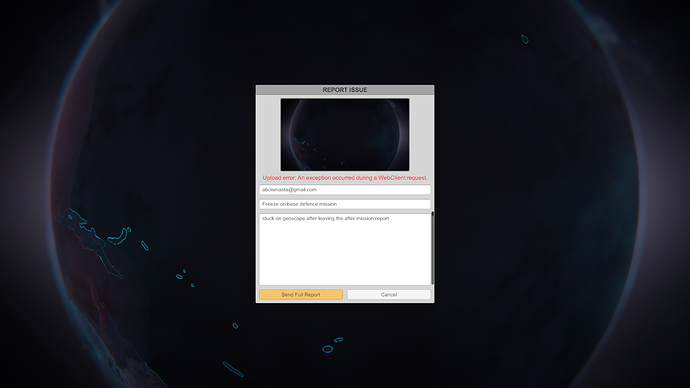 I have same prob i am stuck after a base defence, no UI and cant move nothing, but F12 work for me and i send the bug report. But i am totaly stuck , autosave brings me to the same screen.
when i start the base def new, at the end same thing (shit)

@abcismasta @Silvervh77 There is an issue with the bug reporter where if you have too many save files in the save folder, when the bug reporter tries to send the entire folder, there is too much data and it chokes

I was able to determine that if a mutog dies in a mission, it will reliably result in that screen if it helps.
Edit: Mutog dying = bad.

Thx a lot, yea this happens in my Mission, puhhh nice ti know now i can handle this Bug

Ah. I had exact same issue and it may well correlate to the mutog dying. When I reloaded from a previous save and played the mission all the way through it survived and I did not have the problem.