I have pre-purchased the game and have been messing with the backer builds. But I cannot see any other versions in my library, the store front shows editions as available to buy and only the Backer Build is the only visible version of the game. Am I alone in this? Any fix?

Metoo, backers build only and DLCs and Phoenix point Pre-Purchase which is unavailable

Ah I fixed it by going to game store page in Epic Launcher and see all versions, then Phoenix point appeared!!! 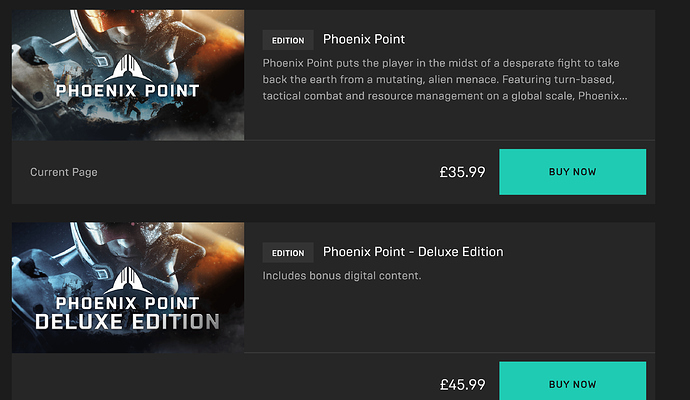 Mine still shows this on launcher? Am I looking in the wrong place? Am I going mad?

Same problem, I still got the Backer Build on my library… Someone has a solution ?

same problem (mac). only backers build in library and bunch of other releases to purchase.

Did you buy these keys from a key site or from epic/snaphot? I think the key sites might have only provided a key for the backer build if you got the “platinum” product. I believe that the actual release keys were emailed out to customer. The backer build product in your epic games list will not turn into the full product. if you received and installeda key for the full product, the backers build would still be in the list.

Ok great !
Can you tell me how can I send him a message ?

(apologies if this issue has already been solved)

Ok thanks, I will contact the support in this case

sorry I didn’t to your issue sooner

As I suspected. I’m an idiot. Checked my junk, had an email with a key. Redeemed it and we’re good. So anyone who still struggling, make sure to check that as @Kings_Rook says. And thank you @Kings_Rook, for both your patience and your help.

you’re welcome. Also it’s not your fault. The filters the email services use are to blame