Spoils of war too limited

This is a seriously stupid bug; When I fight and beat an opponent that is using human items I should be able to recover those items - but they all magically disappear. WTF? Even when I am defending a haven from a hostile faction - the armor and items magically vanish. FFS that is stupid.

While collecting all spoils of war would be nice, seems it would trigger to fast tech advancement (pair of almost anything is needed to research an armour or a rifle).

Game kind of saves it for harder tasks (given special missions ) or needs recruitment of pair of similar soldiers (at lower difficulties where you get them with equipment), producing replacements, sacrificing for research and then producing those.

Or - in the end stealing, stealing (raiding technology where research Center exists).

I know it does not sound rationally - but that is not the point. Its hard to get game. If it would be as you expect - I would expect only destroyed parts of armor not to be present, as well things hit by explosives. Cannon use could also opt out spoils.

It is not a bug, but a design. If you want to change it then propose something that won’t throw economy out of place. And use more polite and reasonable phrases than WTF and FFS

Its more a balance reason, that equipment has a chance to drop. The game would become way to easy, if you just raid a Haven and you would swim in equipment.

that equipment has a chance to drop

If you ever played the original Xcom, then you know that is exactly the point. Weapons and items would be recovered after combat and be recyclable into resources.

That was logical and made sense. The disappearing items mechanic of PP does not make sense and defending it solely based on ‘game mechanics’ is absurd. There are plenty of ways to balance a game - and PP needs it.

Don’t be contrary just for the point of being contrary. It is not a flattering look.

If you ever played the original Xcom, then you know that is exactly the point. Weapons and items would be recovered after combat and be recyclable into resources.

I fully agree, but then I would vote for like 10 units for reverse engineering to counter balance it.

I would simply allow human weapons to be recovered after an engagement. They can already be scrapped in game.
However another interaction might be to allow them to be sold or bartered - and, for some items, at a profit !
It only makes sense if we are researching and manufacturing high tech weapons that havens might want it. Even better - it makes the research investment make more sense - as well as the investment in manufacturing capabilities; there should never be an idle plant!
The profit does not need to be huge - just enough to keep the manufacturers busy (and be worth the players trouble)
It could even be fun if it were ‘market’ based - where the more an item is sold In a period the lower its price. So if you are constantly selling cannons the price goes down - forcing you to take it off the market for a while until prices recover.
In the original xcom you had to sell items as your budget eventually became woefully inadequate. The same could be true here; in PP eventually exploration sites dry up - manufacturing and/or recovering item for sale could close the gap (as it did in Xcom)

BTW - has anyone noticed that armor is never dropped? Apparently we have perfected nudity ammunition in this version of the future.

Hugh, just drop the attitude please, as most of us here are players and not the company. Also, don’t you think the original creator of x-com has thought about this? Do you really think there’s no reason behind it?

Ok, now about the topic. It was probably a fast way to balance things out while they have a chance to test a different / better way. I surely agree with you that we should be able to loot the hell out of it and it would be much more fun. I also know that there are probably more problems with that than I see, but in my ignorance of these, I would think that a good starting point would be:

We could also go firaxcom route and say that each faction has technology to prevent use from outside the haven, and then reverse engineering would be behind a tech wall for each faction that you would only get the research after 25% rep with the faction. Weapons that you got from soldiers would not have this type of lock. Players would mostly want to reach 50% rep instead of doing reverse engineering then, doing it mostly for the most important items only. The major problem with this idea is that some pandorans use haven tech, I don’t know what to do in this case.

Hugh, just drop the attitude please, as most of us here are players and not the company. Also, don’t you think the original creator of x-com has thought about this? Do you really think there’s no reason behind it?

Well, we did expected more resemblance, at least in way we research, gather alien info and develop. Yes, people do believe they hereby speak to company, as this is official fora. What they forgot is that its just chat among users, there is a tool to officially propose something https://feedback.phoenixpoint.info/

Hey, Sectoid … wasnt it alien race even back in Laser Squad

what about introducing a check, that will only drop weapons that were not damaged during battle? so player will be able to get only things, that were not damaged (weapon takes single point of damage and it would not drop)… at the same time, maybe some sort of loot management could be introduced, and player would have limited space what he could take with him… (so in certain missions, he would be allowed to chose few items from the pool of items left on battlefield - haven defense comes into mind with this - so as a reward, player would chose material, or battlefield loot pieces)

I didn’t play Laser Squad, but sectoids are the first enemy you encounter in the original x-com. It’s been my nickname since then. When “sectoid” is already taken, I use “sectoid_br”. This goes back to 1994 when I was signing up for an email service and every nickname I tried had already been taken and each try took 4 minutes of an expensive inter-state call. I then thought I needed something so unknown and/or ridiculous that no one would have it and when the sectoid came to mind, I thought it was “f’ing brilliant!”. It worked and when my friend that played the game with me found out, he told everyone at school that sectoids did not have genitals… yeah it wasn’t that brilliant

I kept it anyway as I loved the game, and a few years later when I searched for the sectoid nickname in ICQ, there were thousands. I may’ve been one of the first to use it, though! And I even met another “sectoid” in real life totally by chance. The original X-COM is a much beloved game.

While people do fondly remember XCom 1994 ( me too, Amiga AGA version!)

I am an even “older” player. Indeed, my first encouter with turn based strategy is Gallops
Laser Squad (even it turned out not to be first one in history)

Laser Squad is a turn-based tactics video game, originally released for the ZX Spectrum and later for the Commodore 64, Amstrad CPC, MSX, Amiga, Sharp MZ-800 and Atari ST and PC computers between 1988 and 1992. It was designed by Julian Gollop and his team at Target Games (later Mythos Games and Codo Technologies) and published by Blade Software, expanding on the ideas applied in their previous Rebelstar series of games. Laser Squad originally came with five mission scenarios, with an expansion ...

It was playable even on Spectrum and Commodore 64 and Amiga version was quite advanced.
A mission called “Paradise Valley” included Aliens, and there were first … sectoids.

Surely, I do remember the gray XCom 1994 Sectois so predominantly abused in movies
and XFiles 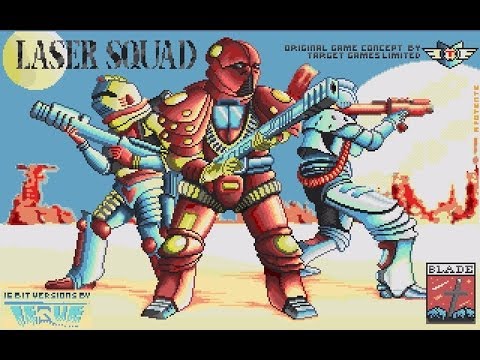 Thanks for that! I knew about LS ofc but I’d never even seen it, much less knew that it had sectoids. Seeing Marsec weapons there gave me a smile because that’s another reference xcom has in X-Com Apocalypse, and I played hundreds if not thousands of hours of it too.

XCom 1994 started as Laser Squad 3 (Laser Squad 2 was campaign expansion including one with Aliens).

Too bad it was not a commercial success.

I am always amazed how much LS mechanics lives up to the day (Action Points are LS Time Units, shooting, throwing explosives, explosive shots …), losing TUs if one is too heavy, armor strenght …

There is even one @Julian I miss even today: FREE THROW. Namely, any object could be thrown to a given direction, so I used to throw clips between soldiers if being without ammo