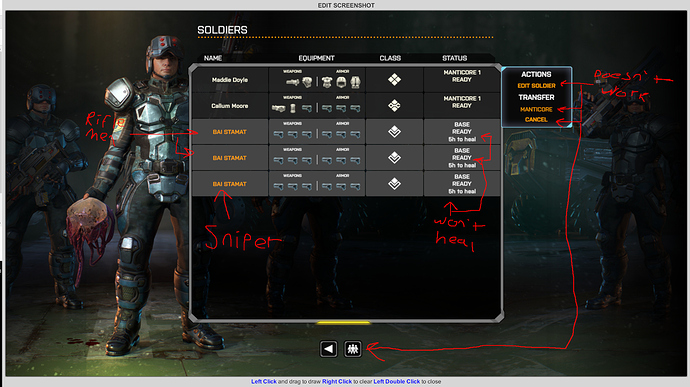 So i had gotten to just start into the Geoscape and had to save the game and come back to it later. What had transpired before i got off was the following.

I had just finished a Haven Defense at Fort Jackson and had revealed an Alien Nest. I returned to Phoenix R&D 4 to make some additional ammo before taking on the nest, 1 clip of Sniper rounds and 5 clips of AR rounds, and saved the game there after. When i loaded it back up i was greeted by what is seen in the image, i was unable to interact with the soldiers on the Manticore 1 and was also unable to heal them by letting the time pass, the menu on the left was also unresponsive. I tried reloading and restarting from the most recent save but this was always the end result. The 3 missing soldier were my two rifle men and my Sniper, all of whom i had given crafted ammo to before logging off. Two of them were wounded as well before i logged off, the sniper and one of the rifle men.