Technician retrieves turrets, however they are not in his inventory or active slots (though the weight suggests they are). Which means one can’t recover a turret and deploy it elsewhere.

You have a big bug in your game, turrets are put back in inventory and can be reused when equipped again.

Placed in unit’s inventory or stores?

Unit inventory, but don’t dream much.

It’s useful, there are use cases, but not that many because move pick equip throw is at least 5 AP. Still without it this would be different.

I had this problem on the final level. Which worried me terribly. For me it was because my inventory was full, and when it’s pick up it goes into your inventory rather than your active hands. So after depleting the contents of my inventory a little and perhaps 2 turns later - suddenly my turret appeared again. I have no idea what took place, but in these circumstances it returned.

Most probably a bug, recently, when exchanging items between 3 soldiers a cannon disappeared. Nope it wasn’t on ground.

Just had that problem. 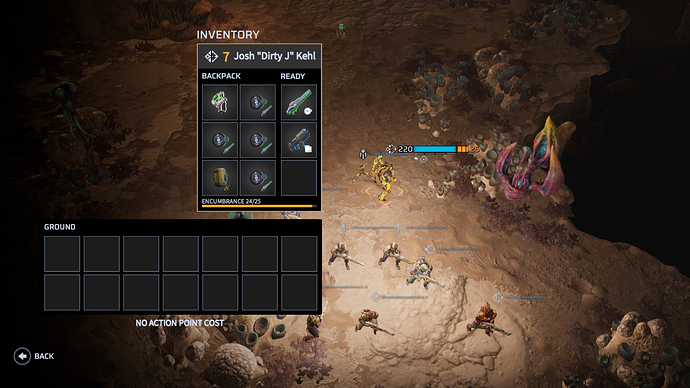 If backpack inventory is full turret disappears on retrieve. Reported via f12.

Happened to me = moved one of my inventory items to my hand slot - closed inventory then opened it again - turret was there.

moved one of my inventory items to my hand slot - closed inventory then opened it again - turret was there.

Yep, that’s the fix. If your backpack is full, the Turret won’t show. So you have to move an item into your ready slot and then reopen your bacckpack again.

Clearly a bug, but at least you haven’t lost the Turret.