Like the title says…I had a GREAT head shot to the Queen, blew the top of her head clean off and she still attacked like me there was no tomorrow!

She did have the “bleed out” icon…but not anymore than if I had shot a limb off.

Well, chickens can run a lot while being headless, I can’t say it’s impossible to survive for an alien virus-infected mutant even without its head

On the other hand: 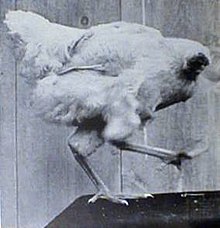 Mike the Headless Chicken (April 20, 1945 – March 17, 1947), also known as Miracle Mike, was a Wyandotte chicken that lived for 18 months after his head had been cut off. Although the story was thought by many to be a hoax, the bird's owner took him to the University of Utah in Salt Lake City to establish the facts. On September 10, 1945, farmer Lloyd Olsen of Fruita, Colorado, was planning to eat supper with his mother-in-law and was sent out to the yard by his wife to bring back a chicken. ...

@Potkeny LOL…so true…now if the Queen would run around like a chicken with it’s head chopped/shot off, that would be really, REALLY funny!

Each part of the boss tells you exactly what will happen if you disable that part, wither it be max HP down 14 or movement reduced by 2 or max hp reduced by 5 and cause 2 bleed. If bosses could be killed simply by disabling the head then they really wouldn’t be bosses would they? Besides that pretty sure the lore of the game doesn’t explain how the infection controls the host, entirely possible that it is sending the electrical impulses to control the muscles from within the blood stream rather then from the brain muscle, in which case blowing off the head wouldn’t kill the creature merely cause the blood loss to start which then would eventually lead to it’s death when it is out of blood. Just saying.

Same for me, first play thru…

Yeah, I agree. I mean, losing all willpower could be devastating for your soldiers but for an alien boss I doubt it would be much of a concern, especially with that much head damage. It would make much more sense if her awareness was reduced (the range she could see or hear your soldiers) or she changed movement patterns to just rapidly charge across the level at random rather than searching out your soldiers and deliberately attacking them. Gaining a movement buff and dealing medium damage to anything she runs into but losing direction and her heavy attacks.
I suppose you could justify it by saying that the virus perhaps has a hive mind, so any remaining grunts around her could see and think for her, rather than her actually needing a brain.

If it were me designing it though I’d give the head a lot of armour (probably 5 for the level of the pre-alpha build), maybe 3-5 pips of health and a devastating effect if lost. I’m partial to the ‘rampaging queen’ option. Blowing off a queens head and watching it charge through her own soldiers would be pretty funny. It could also easily backfire though if she charged straight through your squad instead.

Ha…yes! Just a little bit ago I was thinking about almost the same thing you just mentioned about the “rampaging queen”! That would REALLY be a sight to behold…even doing damage to her own “troops” as well as our soldiers…YIKES!

But not living for 18 months like @Potkeny “Mike the Headless Chicken”…but then again that “virus” thing could make that happen!

She has more than one brain.

“She” (if it even has a gender) is an alien, and the head might very well just be a visual mutation. According to what I could dig up on the interweb, spider brains actually extend into their legs, and in the case of this alien, who knows where. Cockroaches (just to take an example from real life) can actually live without their heads for weeks.

She has more than one brain.

Hahaha that very well could be true!

“She” (if it even has a gender) is an alien, and the head might very well just be a visual mutation. According to what I could dig up on the interweb, spider brains actually extend into their legs, and in the case of this alien, who knows where. Cockroaches (just to take an example from real life) can actually live without their heads for weeks.

Like both of you have mentioned maybe she does have more than one brain…like in her legs…I’ll go shoot them off and see what may happen! And as far as cockroaches, those things could probably survive a ground zero nuclear bomb explosion!

But still I would love to see a rampaging queen!

Hahaha, I’m not sure if you guys realise or not but @JulianG is the CEO of the company. He’s the head game designer. It’s confirmed that she definitely has another brain.

My guess is that it’s in that thorax, the super armored part with loads of health. Otherwise it wouldn’t make sense for the queen to keep moving with all her legs and her head destroyed.

HAHAHAHAHA…I should have put two and two together about who @JulianG is! And now that I see the name I am embarrassed

Ii putted to the ground three Times the crabqueen, one of the i disabled her torax she Lost something like 39 hp and bleeded for 8hp per turn (she had a pinch and a Leg disabled too).

My respect for the man increases by the day