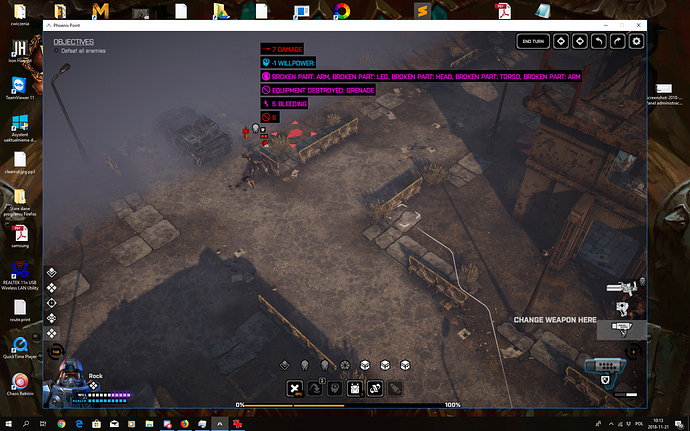 I’m not sure what the research will allow you to do with that, but for now it’s the same as when they destroy your rifles.

I had a few games tonight and paid more attention. You are right, I am destroying alien weapons all over the place.

I usually try to funnel them into a kill zone by backing up one move, when a grenade lands between 4, the screen fills up with things that just had a bad day. I wasn’t reading all of them.

Until the alien weapons or shields are useable for research, they are no real loss at the moment.

This patch today has changed the game play a lot. It now takes more than one grenade per crabman and there are loads more per map. It has equalised the tactical game more. You can`t just Yolo forwards with firecats, until you hit the other side of the map now. Far too many enemies to yolo, so it has made the game more tactical again

One thing that I need someone else to try and verify for me with the grenades.

Since the latest patch, grenades do not clear cover, even if the path says it is clear to do so. Both the Firecat and hand thrown grenades do the same thing. If you have some high cover (like the back of the Armadillo in front of you) and you are shooting/throwing over the top of it. Launch just far enough in front so that the grenade path turns red (clear to throw). Almost every time, it hits the back of the Armadillo and injures all your squad in the blast range behind it.

Had it happen twice in two moves and wrote of an entire squad! My squad has started hiding their grenades from me!

They might have adjusted acc on the firecat, since we were all abusing the hell out of them.

They might have adjusted acc on the firecat, since we were all abusing the hell out of them.

Haha, that’s exactly what I was thinking but the thing is, it is happening if you throw a grenade too. It just seems to be destructible and movable objects that are blocking them.

The Armadillo defiantly, I was using that as my meat shield then launch over the top. In the Alien cave bases this has been a great tactic… that is until all the grenades started exploding in my own squads faces!

Then the destructible cover on city maps and alien caves. The solid map items, buildings or side of the caves still just block you from launching all together. The coral looking things on the side of the alien base caves, and the spires (dead or alive) etc do it too.

It is like the planned throwing arch path of the grenades now ignores movable objects.

Could also be that they played with the trajectories a little. Bug sounds possible, too, though.