Mindfraggers, Tritons and Mortar Chirons wave heavily so they can almost wholly get out of aiming circle just before shot happens.

A bullet travels faster then a bob or weave, when you lock in it should be locked in, it really is that simple, if you see it in the circles you hit it…

And I like aspect of learning and correcting my shots when I know how they will react.

I have never had that happen in freeaim mode, except

(1) when using Rage Burst, because then the enemies do tend to flinch.

(2) when there is an irregularly shaped obstacle outside but in the vecinity of or touching the aiming reticle (for example, some rock), because the hitbox of the obstacle is actually a bit larger than the obstacle.

I was under the impression that the targets stayed still after a shot fired in freeaim mode, except with Rage Burst.

As other said. This is where “snap aim” comes in handy as well. Manual aim will stick to direction you will set - so if enemy moves out of the way, the aim won’t adjust for it. “Snap aim”, while potential less precise, tracks enemy’s centre of mass - so if he moves, the reticule will follow the centre of mass.

Because this is a new hit system, the player should have a way to see the “freeze frame” of the miss where the bullet’s trojectory passed.

Thank you for the explanation.
I have to be honest I think that’s a poor design choice as they’d have to be pretty quick to dodge bullets or flinch out of the way of remaining burst fire, and if they were that quick they’d move a lot further. If you mean recoil from hits then that wouldn’t affect the accuracy of single shots, and with burst fire it the difference between the first bullet and last would only have a minute change to the outermost edges of the circle - unless you’re aiming at the fringes of a target anyway which isn’t good targeting.
Also given that you are aiming at a part of the enemy and not the point in space they currently occupy then they should be fixed in place once manual aim is confirmed - seeing as if they moved a soldier would surely adjust to still aim at the body part and not stubbornly shoot into space.

We now have shots that are 50% inner circle, 100% outer circle, but unknown % to miss anyway because the target ‘bobbed’ out of one/both circle which nullifies the targeting system somewhat and isn’t really represented to the player base.

While it may not be an ideal solution, it’s an abstract representation of a moving target. While the game is played in a You Go, I Go format, in reality the enemy wouldn’t be moving all of their soldiers and firing and then standing still while the player moved all of theirs.

In most games like these, it is presumed or implied that a “turn” (a full round for the player and AI) consists of a certain amount of time, and that all action is happening at approximately the same time.

We decided to settle on the slow motion as a compromise - but the fact that enemies do still move and flinch is taken as “you’re firing at a moving target”.

This was also done mechanically to give the “snap shot” (as in, the shot without manual aiming) more utility.

Manual aiming was originally a Sniper special ability back in the prototype, but backers liked the idea of the free aim so much, they wanted it as a mechanic available for use by all classes.

This comes with some design decisions: Do you limit its use? If so, how? Do you make an aimed shot cost more AP? Do you make it cost WP? And if so, do you need to have the WP to even go into the free-aim mode.

One thing we were very aware of is the potential for free-aiming to slow down the pace of the game. When the player takes every shot in free-aim mode, searching for the sweet spot, how do you make it so the snap shot still has value?

In the case of Phoenix Point, the snap shot tracks the centre of the target. You can see this on enemies that move a lot, as the crosshair will stay on them.

7 Likes
Free Aim change
A comprehensive guide for playing Phoenix Point (or an attempt at one)
Will you ever fix the basic aiming issues?
Ementrude April 21, 2020, 5:46pm #10

Great explanation as feedback and perfectly explains my gaming experiences.

Cam I ask: was this against an enemy with lots of ligaments, like an Arthron Grenade Launcher arm? It has been my experience that bullets can - or seem to - pass through the gaps in a target’s body and miss that way, even if the whole of the target is encompassed in the outer circle.

It all makes sense, but TBH I haven’t noticed it at all.

I very rarely take snapshots because I’m not convinced that it is the optimal shot - I almost automatically go into freeaim even if to make sure. The only times I opt for snapshots is either when I’m absolutely sure that it’s going to be a hit and a kill (flashing skull & crossbones), or the opposite - it’s an opportunity shot and I don’t care much whether it hits, or misses.

I was completely unaware that there was any advantage to using snapshots.

I was completely unaware that there was any advantage to using snapshots.

For me it is good time-saving shot for:

That’s a very thorough and detailed explanation. Thank you. It might be worth adding some portion of that to the tutorial to expand on the aiming mechanics for new players.

I need to review my use of snap shots as I’ve always preferred to aim, particularly when there is partial cover.

I think the first one might have been an Arthron. I shrugged it off as me missing a tiny hard to see gap somewhere such as between arm and body, although the shot seemed to miss high.
When it happened against human targets with upper body shots (no possible gaps unless their torso has holes) I realised something was definitely unexplained or buggy.

It makes sense now, and I may be noticing it more as I came up against 40+ Armour Pure early on and only had Snipers to counter.

What frustrates me more then all of this is when you can FULLY see the alien you can see the circle right in the middle of it and when you zoom in it only shows you the left toe nail sticking out for behind a rock? WHAT is that? Either you can fully see it or you can’t? It just forces you to step out one more square and screw up your carefully worked out action points and movements due to the deception of the interface angle shown… that is really more irritating then missing a shot!

I too have experienced this bug. At first I assumed there was movement and tiny gaps I might have shot through, but when it started happening on a solid big-as-a-barn spawning abdomen I concluded it was a bug.

It happens to me all the time… especially when using the cannon! You walk right up to the alien put the circle in the center of the biggest part… NO GAPS at all even more outside to spare, then you fire and OH nOooo… I missed? Seriously? What is that!

Experienced this bug again. 4x full-circle misses on a mindfragger attached to my heavy’s head.

I’ve occasionally had this, but mostly it’s to do with whether the head or crab thing is highlighted. Additionally, because unless you’re close enough then the aiming probability comes into play. To be honest, the easiest method for killing them is by bashing one with your weapon. I think though that it is worth taking time to move the reticle about a bit and see what happens. But it is certainly not a clearly defined visual and I am always reluctant to shoot a fellow soldier with a gun. Perhaps that’s what the developers wanted.

If you shoot the crab leg it probably won’t kill it and just shoot your soldier, whereas a nice lined up shot with a pistol at the main body section is likely to work. Additionally, does the slow motion movement as described by Unstable Voltage elsewhere have an impact. If one had a crab thing on your head mind controlling you, I suppose you’d be moving a bit. This movement issue has been well documented.

We decided to settle on the slow motion as a compromise - but the fact that enemies do still move and flinch is taken as “you’re firing at a moving target”.

To me I thought it was a very satisfactory answer and makes sense. The concept of trying to turn a movement into a turn-based situation. But I suppose it’s how one views it in your head and we all perceive the world a bit differently.

The following screen shots may demonstrate the problem that you have with not being careful with the reticle. 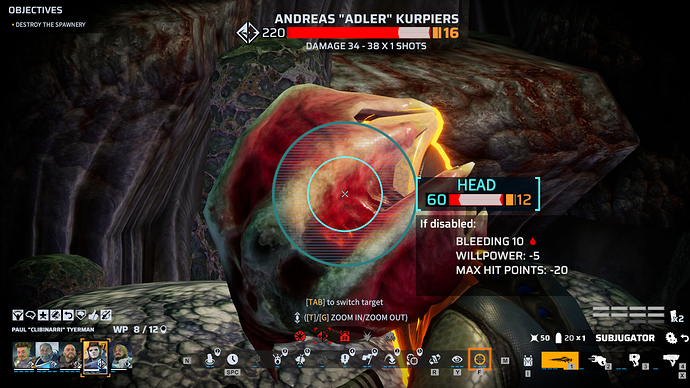 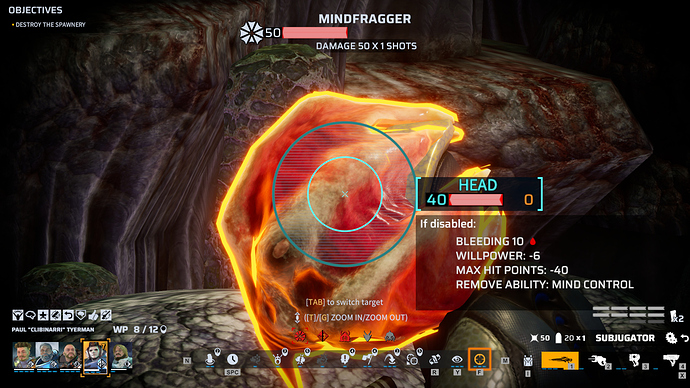 Not the problem I’m having, thanks. The reticle clearly read Mindfragger. And in any case, if I was dead on my own soldiers head, I should have hit him, but I didn’t hit him either.

I have experienced missed shots with goddam worms! Are they bobbing and weaving too???

No - there is a bug in the system. Quit trying to gaslight us.

Are all the circles covering the worm?