Game is unplayable on my PC. If it’s in focus, it maxes out my CPU’s. As soon as its not in focus, even if it’s still running, my CPU utilisation goes back to like 2%. Tried windowed, full screen, 1080, 4k and a few resolutions in between. Tried fantastic quality and potato quality. Same thing every time. 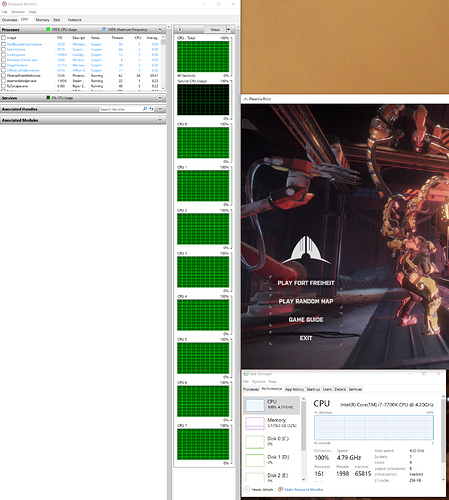 Can’t paste out of focus because im a new user, and have a one image limit apparently but its the same screenshot as above, except this time I’ve clicked on something other than the game so the game is there and running, but not in focus. All cores down to idle levels of utilisation (0-4%).

Out of focus screenshot: 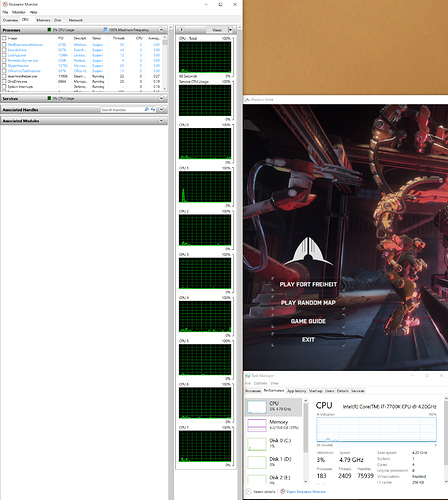 Looks like every core want to play the game and they can’t decide which one should go first, so they argue and don’t let you to run the game for yourself. Turn 6 of them off.

… I honestly don’t know how to respond to that.

If anyone has some actual suggestions of things to try I’d appreciate it.

Why on earth would anyone overclock 4Ghz per core + CPU?

Try getting the newest BIOS, setting it to normal values and trying then.

Also try playing lower then 4K, its not yet that supported.

Other option (beside waiting for new backers build) would be to simply try Linux and Linux version of game. It somewhat better handles resources then Win10 and your gfx cards is tested as camping champ there too

With the GeForce GTX 1080 Ti already being accredited as the “best gaming graphics card” by Windows sites, given NVIDIA’s continued Linux driver quality, it really comes as no surprise that the GTX 1080 Ti also delivers the best Linux gaming performance right now too. That is, unless you only consider open-source graphics drivers an option for your systems. (Linux gaming)

Note this are friendly user advice’s, nothing official

Sorry it was kind of IT joke. Try turning off overclocking.