Lost science of ancient ones as remedy for the virus

I wonder if winning the game just with our efforts (not signing with any faction) would require us to find some tombs or temples of the ancient race which had once repelled PV. Will we have missions all over the world to enter their buried cities?

I would say it’s more likely to be something incomplete. Like we might find their research or a not fully functional prototype, but if they had a proper cure then they probably wouldn’t have been wiped out. Kind of like the Mass Effect 3 that could stop the Reapers but was never completed by previous civilizations.

In the lore the didn’t have a cure. They could only poison themselves to give future homonids a chance

In the lore the didn’t have a cure. They could only poison themselves to give future homonids a chance

Which sounds akin to how ancient humans defeated the Flood in the Halo universe. Likewise such research could lead to a “cure” of some sort even if they didn’t get there. For example if we were to take the poisoning but instead come up with a way that severs or poisons the connection with the Hive Mind so that it can’t control people. Thus it’s not a true cure but it still lets those infected remain as people as opposed to puppets.

what do you guys think of the underlaying principle that drives THE SWARM?– if anybody of you happened to have read this absolutely outstanding (German) scifi book (they are currently working on a hollywood-interpretation movie). basically it’s about ancient alien life in the ocean, orchestrating eradication of human life through mutating and controlling several sea animals and mammals – and also the water/streams itself. a little similar to THE ABYSS (movie) but only due to the setting. 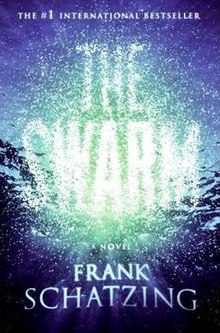 The Swarm (German: Der Schwarm) is a science fiction novel by German author Frank Schätzing. It was first published in Germany and Austria in 2004 and soon became a bestseller. The book follows an ensemble of protagonists who are investigating what at first appear to be freak events related to the world's oceans. The book has several sub-plots and will occasionally follow minor unrelated characters to illustrate how events unfold around the globe. Sigur Johanson, a marine biologist working at t...

Thanks for sharing that book! I will definitely check that out.

lol, so I was good at guessing.

How so? What have I missed?

Who is this question for?

You can have the quest in game, the final Phoenix project research is based on the ancient race that used to defeat the Pandora virus but wiped themselves out in the process, it was a very costly victory but it was the only way. But in Phoenix point age you can align with one of the faction and choose different win, or you can wipe everything out and start age leaded by Phoenix project.