Is it intentional that enemies are out of LOS over half-cover when adjacent? I can neither shoot nor melee attack. Looking strictly at the size of the models, I kind of feel like my brave soldier should be able to attack 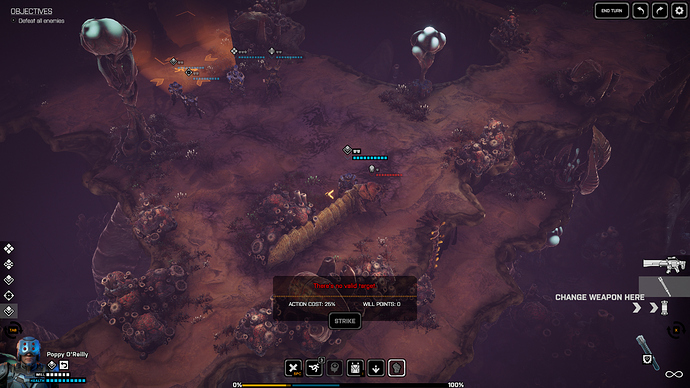 I’m not to sure about this. I think it needs more feed-back from players. All I can say is so far I am really happy how LOS is working. It’s already leaps and bounds above another xcom game I dare not mention.

There is some mechanic that blocks melee attack if there is an obstacle between you and the target. Even if crabmen have deployed his shield then you can’t attack him with melee from that direction - at least i think so.

The shield/melee head-on interaction I can understand as an explanation. In this situation I disagree with the melee/obstacle mechanic. But an additional problem here, which I was not able to show, was that I could not fire at the crab guy either. He’s out of LOS. Surely this can’t be intentional. (I fully assume that he would be in LOS if he was one square away from the half-cover.)

I had a similar situation (and reported as a bug) where a heavy was in front of a low cover and couldn’t shoot the alien at a lower elevation in full view. Before moving to that position the game even had the thin tracer line showing line of fire was possible, but once there, no targets were available and all I could see from manual targeting was the low cover wall.

I’m new here. Do game devs ever come here to comment on the actual mechanics, so that we don’t have to guess or report bugs that are not bugs?

They come here and read. Comments are usually done by community manager -> UnstableVoltage, and sometimes by mighty Julian himself.

But you know. They don’t have time to sit on forum.

i work 8 hours, and counting the drives i have to make daily, its extra 2 hours, then at some point i go to gym, spend 1½ hour there, and also growing a 9year old girl on my own. Yet i find my self reading these forums again =)

I think its more about that they just cant come here so casually to chat with us. People analyze every thing the devs say and hint, so usually they have to be carefull what to reveal, what to promise. This went totally offtopic, im sorry.

Did some F12 reporting also about covers and LoS when aliens tryed to use grenade launcher on me thru a building.

I’m not expecting the devs to comment every thread, they owe us nothing

But I was curious to know because I don’t want to send bug reports for things that are intentional mechanics.

I see the need for two new (?) pinned threads…

I am a technology consultant, project leader and team leader for over a decade.
The first rule of successful enterprise level project is to keep your devs away from the end client.
I want to be sure that devs are able to focus on discussed, analysed and accepted tasks, not on getting ideas from chit chats with end clients.
IF they want to join the forum in their free time, that’s great. However if I would be a SG dev I wouldn’t introduce myself as a DEV, we have a community manager, that’s enough. IF we cross the line and dev would start to answer our questions directly, or react to our wishes, we (someone) will expect that to happen on a daily basis, or blame devs for not responding on time. It’s not their job.
If SG will decide to plan some Q&A session, that’s fine. But please don’t expect to see devs here. I find @UnstableVoltage a Blizzard level community manager. I am sure that he is capable of forwarding any dev related question to dev team. and hopefully, they could provide an answer in their free time.

This is a known bug.

The intended behavior is that you should be able to see, target and shoot at an actor in this situation. It’s caused by a current issue with the ray-tracing between targets, being blocked by the cover. Like everything, it will get fixed along the way.

Thanks, great to know! Saves me sending a bug report

Did someone say ray-tracing? Gotta get a new graphics card!

The potential damage to target bar. Anyone else thinks it looks a little cheap having red stripes through the pips? I think it would look much better if those pips were solid colour rather than stripes. I know it’s trivial but it annoys me.