You run up to a bit of cover, go to aim, and because the soldier is facing right instead of left all you get is a chunk of wall because the doofus doesn’t peek around the corner he’s snuggled up against.

See attached screenshots. I’d like a function to be able to turn around because the way he’s facing is silly; but I’d REALLY like some sort of understanding of corners or a ‘peek’ feature, which would let me try and get shots off on that explosive cannister, which would open up that whole WALL for the rest of my team on that Arthron 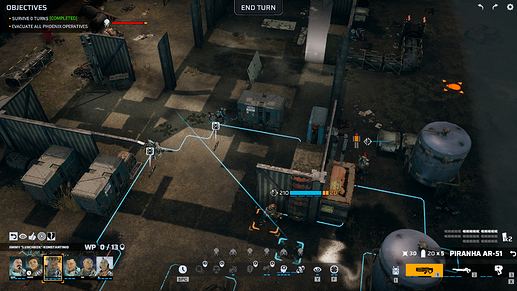 Well you can do a step and do a free aim shoot to blow up the cover and the canister and even hit also directly the enemy (cannon is going through obstacles and enemies, not realistic but powerful feature adding a complexity layout…

Yes facing with covers tend be silly, it’s a visual detail, that there isn’t a side step with a free aim without any target could be a bug.