It stands to reason that each soldier would know what they carry. It would make sense to display inventory in a manner similar to how readied items are shown, without affecting the turn cost to actually manipulate inventory.

without affecting the turn cost to actually manipulate inventory.

What do you mean by “manipulate inventory”?

What do you mean by “manipulate inventory”?

Obviously arming and even may be taking weapons of the ground / hrowing them.

I actually wait to some changes in inventory that manipulating bigger or heavier objects will cost something like 50% AP, medium items 25% AP, and small objects maybe less like 10% and in any direction.

actually wait to some changes in inventory that manipulating bigger or heavier objects will cost something like 50% AP, medium items 25% AP, and small objects maybe less like 10% and in any direction.

Well, he is also right, and you are right and I am right …

Inventory sys in BB2 is clumsy when picking weapons and nice when switching and reloading. Why not having easier pickup and switch n reload system WHILE having AP cost for some actions and having to approve them.

I’m not sure I agree. Soldiers can possibly pick up a lot of stuff, including alien parts they can’t use. It would be really unwieldy to have the entire inventory displayed as the 3-weapon swap in the lower right corner of the screen, which I think OP refers to. Pardon me if I’ve misinterpreted the suggestion.

entire inventory displayed as the 3-weapon swap in the lower right corner of the screen, which I think OP refers to. Pardon me if I’ve misinterpreted the suggestion.

Well … imagine e.g. if it wasnt just 3 weapon swap, but a real “wheel choice” and you could rotate what to pick up excluding alien body parts. It does make some sense in general.

Oh yeah, I get what you’re saying now. Yeah, that does sound pretty cool, but unless they lower the size of the weapon icons it might get unwieldy to use

Icons can shrink and resize when selected, and can arrange like in baggage claim on airport

Or something similar. With icons representing if switching to that item will draw some Action Points (Red 50%, Yellow 25%, Green 10%, White 0%)

My humble visualization - sorry, but I’m working on laptop with limited administrative permissions. 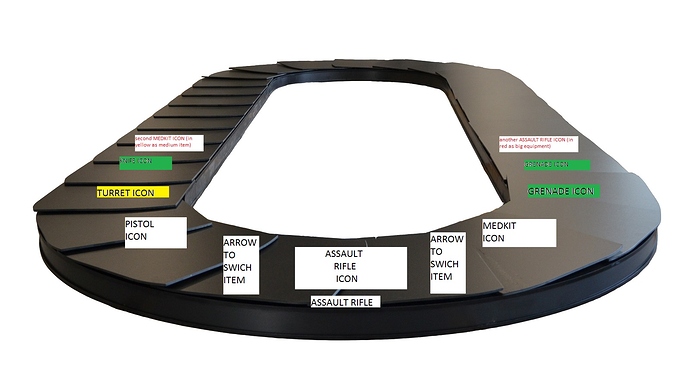 Then the smaller icons will be hard to see, though. I know that was just a quick photoshop for the purposes of demonstration, but even “official” art will have that problem–if you have a lot of stuff in your inventory, the ring will be filled with icons and the UI will look very “busy,” which they don’t want. I think a 3-item ring indicating which weapons you have on hand is good enough.

For me current wheel is also sufficient. But… maybe icons in the ring could be switched in fast manner - just thinking out loud. For me there is no problem going to inventory and dragging item to prepared items slot. :). I just would like to see some backpack rearrangement.

No, any action you take that targets your inventory in some way to manipulate (which means: handle, control, influence) it, such as placing something in your inventory, moving it to your active items (whatever those middle 3 slots are called) and so on would, as I stated in my original post, remain unaffected (which means: not be changed).

to have the entire inventory displayed as the 3-weapon swap in the lower right corner of the screen, which I think OP refers to.

Yes, something like that. Exactly how to solve that in a non-intrusive, eye pleasing and UX-sweet experience is something I rather leave for someone with the proper experience and sense of aesthethics to come up with. The same kind of wheel structure? A small overlay that can be toggled to slide in/out next to the “active items wheel”? A list of item titles?

For example, I would at least like to be able to just tab through my soldiers to find whomever has picked up the two extra grenades and who has the extra rocket. Rather than tabbing, opening a window covering everything so I lose sense of the current context, such as where everyone is in relation to each other, then scrolling to see if I can find the items, and so on.

If there are “too many items” to show cleanly as an overlay / extra wheel, perhaps it would be possible to display [amount] [item type], rather than having each item spread out into multiple places in the inventory list.

I like the idea of opening/viewing the inventory being free with any inventory action(readying an item, putting item into inventory, swapping items arounn etc) should have individual cost in APs. That way you will have a nicely balanced inventory usage cost with an added benefit of not penalizing the player for simply checking what a particular soldier carries.