One question:
Have you started a new campaign or is this an old save from before the patch?

I realised some problems with my old saves after the patch and decided to start a new campaign.
Also just for completeness …

Then unfortunately I’m out, I have no idea why that doesn’t work for you, but it does for me.

From what I recall reading here, the crossbow has been bugged as a non-silent weapon for some time. Perhaps this issue needs to be put up on the Canny Feedback.

It is mentioned in this one: https://feedback.phoenixpoint.info/feedback/p/stealth-nerf in one of the posts and this is already marked as open. I think that should be enough(?).

Some say crossbows are silent, some say they are not. I am still playing on Miskatonic so I can’t check myself. But nevertheless there should be other silent weapons like silent AR, silent sniper…

If there is no other way to properly use infiltrator then to buy DLC, that is pretty scammy practice. If this is the case they will see no more bucks from me.

Crossbows weren’t silent.
I haven’t had the opportunity to play Leviathan yet so I can’t tell if they are silent now.

I haven’t had the opportunity to play Leviathan yet so I can’t tell if they are silent now.

According to my tests after the patch, they are not silent.

If there is no other way to properly use infiltrator then to buy DLC, that is pretty scammy practice.

Yes, that does not feel good, but it is not the only improvement, the other augmentations are also very powerful in some cases.

I’ll try to update my mod: pp-infiltrator-toolkit
It sets crossbows as silent and gives some indications on visibility

But the issue with stealth is not solved.

I’m unable to get a single infiltrator do double dmg. It doesn’t matter if i move or don’t move, if i use vanish or shoot with silent head or or…
In ALL cases the game says that i should do double dmg but i simply don’t.

I too had my infiltrator (75% stealth) who got into 8tile-range of a paralized (!) siren revealed only to be restealthed at the end of next turn. All other enemys where miles away, i don’t get it, feeling helpless.

Hah, it works on broodthingys in lairs. This is the only enemy so far where i managed to do doubledamage.

This was with an 100% inf standing 2 tiles away from it. He did not get revealed as far as UI told me, i think those things have simply no detection/perception. 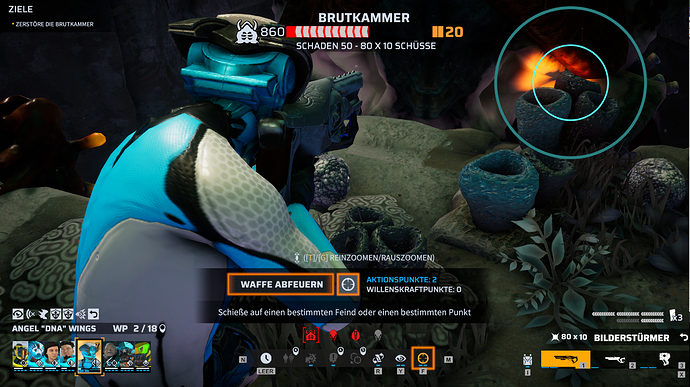 No, usually not, and if it did, you should have done 600 damage (10 x (80 - 2 x 10)), but you wrote that it was 640 damage.
What could happen is that some of the bullets did not hit the 10 armor part but the 20 armor part and/or some of the bullets missed completely. If you shot directly, as shown in your screenshot, some of the bullets will relatively safely land in the structure in front of the spawnery without causing any damage. But I think you didn’t because I can’t believe that you did 640 damage with that shot.

No i aimed manually 100% circle in 10armor Body Part.
This is strange.
But then i still have sometimes snipershots missing completely though a bodypart of an enemy is highlighted and the enemy is 100% in circle.
Trying go come up with a math what happend here.

That thing has 1500hp and you see 860 remaining. The picture should only Show the remaining hp.

Trying go come up with a math what happend here.

Were both target circles really on the part with 10 armor?
From this distance I would rather estimate that part of the outer circle covered other areas.

I think i can repeat this and post a sshot while aiming. Im under way now i think i can post this in 3-4h.

So it seems that infiltrators don’t deal double damage if they don’t use a silent weapon, it seems as if the speed of sound is faster than the bullet xD

So i have two infiltrator/snipers shooting at a siren at the other end of a lair map. They have a 5% difference in stealth which should be irrelevant becaus of the distance. One of them has the silent echo bionic head, the other not.

What happend is that for both snipers the game shows that they should do double damage but only the silent weapon one does it live, the other does normal damage.

Again this is my setup: 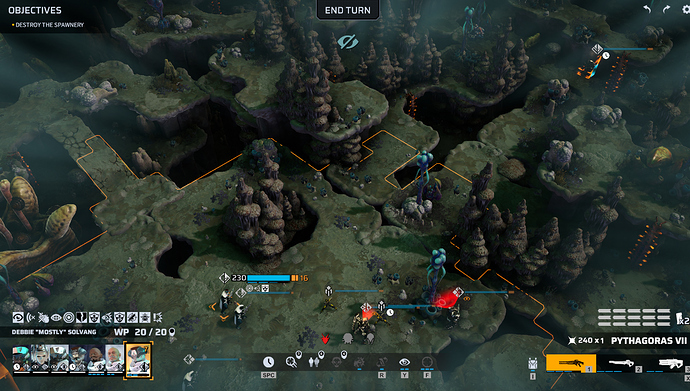 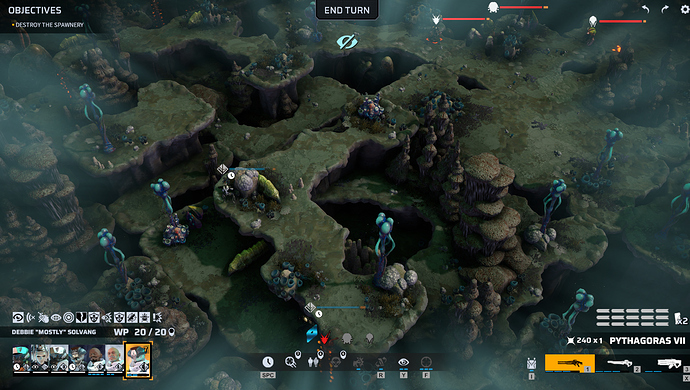 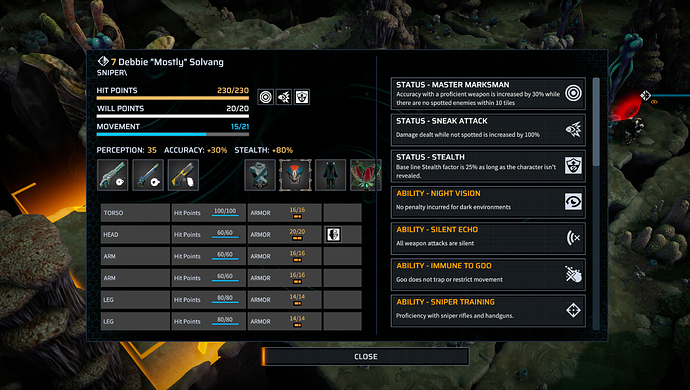 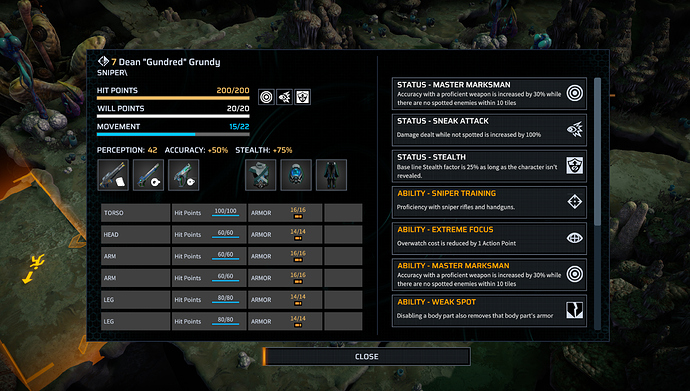 PS: I gave the second sniper the pythagoras from sniper one so the shoot with the same weapon xD

Here the results of sniper one (the silent one): 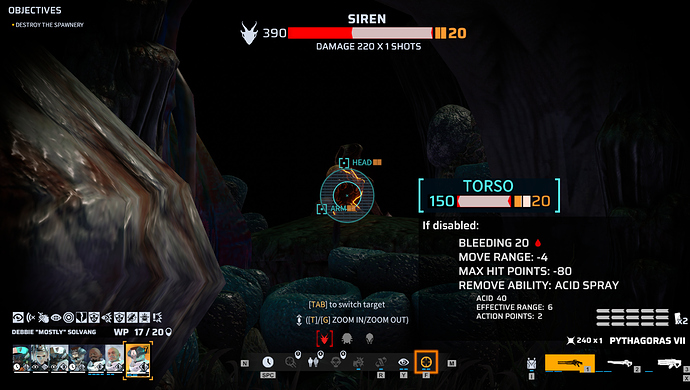 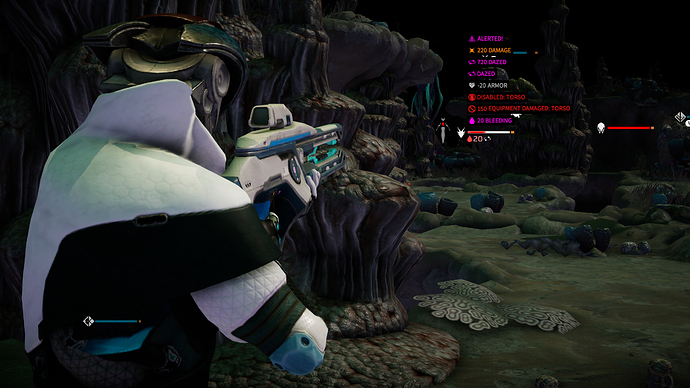 And here is poor sniper two: 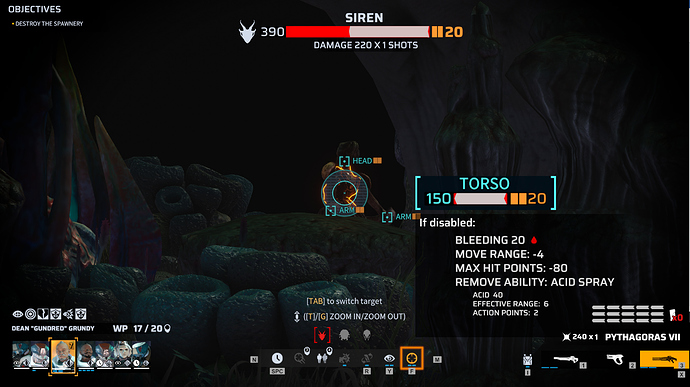 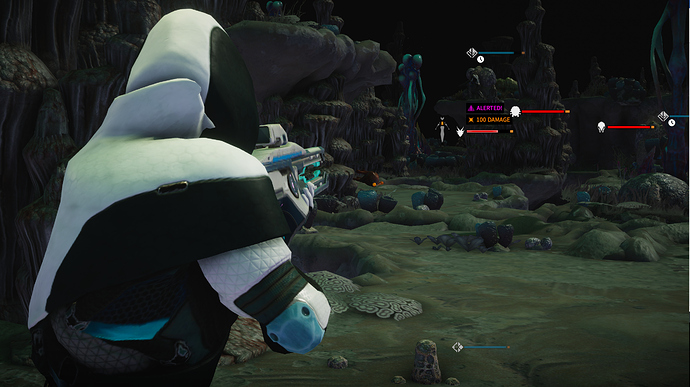 Interesting and shouldn’t be like that. Did you report that with F12? If not and you still have the save, then you should definitely do so.

I myself was not able to determine that, even though I played a lot with infiltrators, mine always got the echo head straight away.

Edit & BTW:
On your Sniper with assault rifle I recommend to try the Daimos from Synidreon, the accuracy is close to the NJ sniper rifles and armor should be no problem for a sniper. First shot quick aim with sniper rifle to dig a hole in the armor and after that 2 times quick aim with daimos and you can deal a lot more damage as with 2 times sniper rifle quick aim, i liked this build a lot.