Amongst other incursion mission types it would be nice if there would be one that allowed PP to go into a haven and spread dissent. The effect of which would be that more recruits become available within that Haven and/or become available at lower cost.

Perhaps the mission could be stealth based and involve acts of sabotage or planting of anti-establishment propaganda.

I’m not sure how it would make more recruits for PP.

“hey we just blow up your security protocols / power plant / poisoned your food, come and try to join us if you’ll be so kind”

Certainly not if you announce it. (That’s why the stealth.)

I’m not sure if the effort would be worth it. Most of them would prefer to stay and recover. Others would like to move to another site of their beloved faction, some would like move to other factions maybe or maybe to some independent haven to live their lives there. I don’t suspect many to join “some militaristic, living in the shadows organization which has bases… who knows where?”. And definitely PP operatives don’t live normal lifes in those underground bases, as for sure they (people who decided to move) would like to have for their kids.

But I see your point with propaganda.

Most probably would. We don’t need that ‘most’ though, we just need more recruits than we get at present. If people start to see their faction as weak/vulnerable, and PP as being strong/secure in comparison then there would be some who would choose to jump ship.

Your point raises an interesting question though, why are the populations of havens that are inside the mist just staying and dying? They should be fleeing en mass to their nearest safe haven, and that allied haven should be doing everything it can to help evacuate that population.

That assumes that people act logically, which they don’t. People stay in active volcano zones when they’re told to evacuate, because it’s their home. Same with floods. Same with war zones. And when it comes to being threatened, people get bloody-minded.

Plus behind the walls of the Haven is the safe space, where you are protected by soldiers & fortifications etc. Out there in the mist zone, anything could happen. Much better to huddle together in the Haven and hope it goes away.

The point is that people act differently, we’re proving that just in having differing opinions during the course of this discussion.

In a population of 1,000 sure some will huddle up, but they all won’t. Some will try to flee, some will fight, some will lose their minds and take the easy way out, and some will look to see if there’s another group to join that gives them a better chance to survive/fight/flee or whatever they’re hoping to do. Even if they’re ultimately wrong, people will take those different decisions because they’re not logical, or rather they’re employing their logic differently to one another.

Interesting to see this, and I didn’t expect the gulf to be so extreme, but the % of people who would be willing to fight for their own country in the event that it was invaded varies wildly from one country to another. 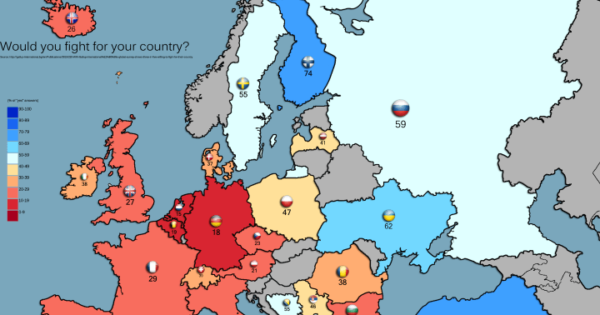 Percentage of Europeans Who Are Willing To Fight A War For Their...

Map created by reddit user Spartharios The map above shows the percentage of residents in various European countries who are willing to fight and go to war for their country. Full results below: From high to low, these are the percentages by country:...

Extrapolate that to PP and the one answer that you could definitely give is that populations of different havens would not all act in the same way.

“Exfiltrate dissenter”. Spent x time on haven to locate somebody and hire him. Simple, no tactical mission needed, good in a squad wipe situation and can be balanced by increasing time.

I suppose that whole this thread should be more like: “make recruits cheaper”.

To be true I have never run out of recruits around my bases. Youtubes who I watch also didn’t had problems with recruiting nice amount of soldiers. Only price is the important factor here.

Let’s talk about “necessary balancing” once we get a build with a balance pass.

Let’s talk about “necessary balancing” once we get a build with a balance pass.

I’m sure we will have that thread after 1.0.

I suppose that whole this thread should be more like: “make recruits cheaper”.

That would all depend upon the mission outcome, and this is the reason why the thread is named as it is.

To be true I have never run out of recruits around my bases.

I’m glad if you personally haven’t.