How low can you go (graphically)?

I’m a big fan of the original Ufo/Xcom-Games and bought a used Xbox360 because of the first remake.
My 4 years old working laptop (Intel HD 4000 onboard chip) could run the second remake quite playable (setting graphics to the lowest possible settings + some changes in an .ini file; needed some reloads in the final mission).

Phoenix Point seems to “reinvent” some great gameplay stuff from the original games and I would love to play it.

But a big question will be, how low you will be able to go graphically in the game settings?
I don’t play modern video games and don’t care about great looking graphics. The graphics of the first XCOM remake were more than enough!
Jagges Alliance 2 is still one of the greatest strategy games though the graphics look a little dated (sadly Jagged Alliance Flashback was [as far as I can guess] only finished to approx. 85%).

I don’t know how many fans of the old games think the same way that I do - but I would love to see a low res. + poor graphics setting which allows you to play the game with all its reinvented gameplay stuff on a slow laptop as well.

So like Alice Cooper asked in his song Trash some time ago: How low can you go?

I’m not opposed to a low graphics setting but I do think there comes a point where we need to accept technology moving forward. I’m on my phone so I’m not going to try looking up your stats but this is why when I upgrade I shoot for good/great hardware. It let’s me go 4-6 years between upgrades; potentially even longer depending on what games I’m after and how much I’m willing to turn down the graphics at the end of the laptop’s life cycle. 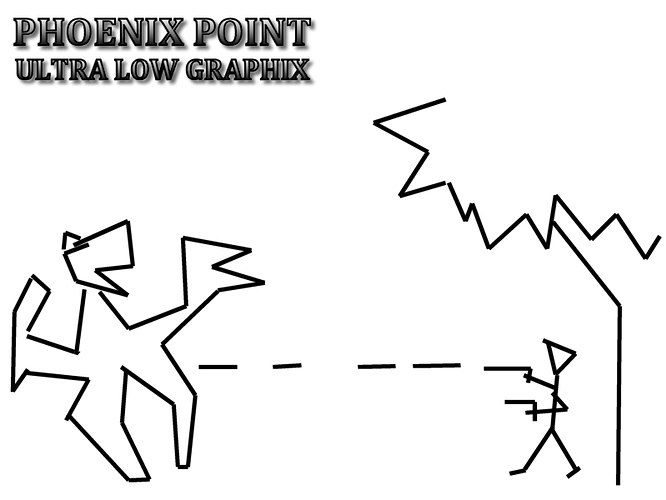 Holy shit that is some cutting-edge gameplay & graphics there!!!

Well I know that you cannot stop technology but in my opinion a Good strategy game does not depend on great graphics (and X-COM 2 even had performance issues in top gaming hardware - probably due to poor programming).

I’m not a gamer and will not buy new hardware for just one game.

(My laptop had great hardware when it was new - but just for working [8GB RAM, high res. screen] not for gaming [on board graphics].

als a XBOX-version will be released (and a new XBOX-One follower has been announced).

Buying a game console instead of upgrading a PC? An odd choice for a self-described non-gamed…

Why?
Buying a used console for maybe 100 bucks for one game seems to make more sense to me than buying an new laptop for 1000 €… There is no upgrade option for my “old” laptop.

Because your old laptop will only get older. As you will still need to use it for non-gaming purposes, you will need to replace or upgrade it at some point due to(rather unreasonable) modern software requirements or simply due to “wear and tear” factor. Buying used-but-still-fresh-enough laptop will not get you dead broke and it’s even cheaper for desktops(honestly, unless you travel for work regularly, there’s no point of having a laptop as your main PC).

And a console is a single-purpose appliance, only useful for gaming. If gaming is not your thing, having a it bought and set up for a single game seems like a bit of an overkill. Not that I am trying to tell you what to do with your money, but it seems like a bit of a waste to be honest. Not to mention that playing a strategy game on a console is a subpar experience.

Why?
Buying a used console for maybe 100 bucks for one game seems to make more sense to me than buying an new laptop for 1000 €… There is no upgrade option for my “old” laptop.

Now I’m not going to tell you how to spend your money. That said you should understand that consoles have their downsides. The PC has a higher initial cost but greater flexibility and longevity. The console is cheaper initially but costs more in the long run (number of games you purchase dependent), doesn’t let you keep playing the game with future consoles, and doesn’t let you mod games.

I DO understand you points - yet I don’t see a need to replace my laptop within the next 4-5 years.

Anyway: I’ll think all that stuff over in about a year, when Phoinix Point will be release.
Till then quite some water will have flow down the Rhine

Its funny, I"m always the one that is asking, instead of how low can you go, what can you do to push this genre to the next level. Advancement in graphic engines, processing, coding, artistic expression continues to increase. If I’m only someone interested in a title I might ask, or even plead to make it cater to 2, 5 or 10 year old technology. But for something I really want to experience and at the same time see it brought into the future to give it some legs I am asking, what can you do to improve the graphics, cinematography and game play to make the game truly memorable.

I understand where the op is coming from and I think that is fine but for this game, an X-COM type game, I don’t want it to seem like all the other cheap steam games you pick up for a couple dollars, I want it to come out in all its glory so we are buying it 2, 5 and 10 years from now.

Looks like there is another interesting solution now: renting a virtual cloud gaming PC for a month and play through the game once or twice

While it won’t matter for turn-based games, it will be interesting to see how viable of an option that is for games where speed/reactions are integral to success. I can see the extra lag introduced by a VM really affecting some games; especially on harder difficulties.

Hi, sure - it’s not the perfect solution for first person shooters where “every frame” counts for top player.

I am quite interested in the subject as well, as a owner of 3 years old laptop. And yes, I am constantly eyeing nice desktops but the ones I am shooting for are quite above budget I am willing to spend right now.

But back to the OP - optimization and scalibility is something we probably won’t fully know until game releases.

It’s not even about every frame counting but the issues due to all the extra induced lag. Now some of this might be cut out if an online game connects directly to the VM for graphics but to you for input but I’m guessing what will happen is that the server will connect to you and then you forward the stuff to the VM to process. So that means we have the lag from the server to you followed by the lag from you to the VM AND the VM back to you before you can then respond back to the server. Then any buffer issues from the video feed on top of all that.

I agree for a game like PP where the combat is turn based it won’t be an issue. I likewise don’t expect to be a problem at lower difficulties of real time games. I the most potential for problems in fast paced games and online games. Especially fast paced online games.

Uh, it (Backer Build 3, first release, unoptimized like crazy as all games are at that stage in development, not indicative of final release) was eating up my 1080 when I was playing on 4k. I’m a graphics, courtesan, and so that definitely impacts performance (all settings on Beyond Ultra, to go even further beyond given the chance).

I was loathe to do so, but your best bet is to (learn) to build a desktop, verify that the parts work together, and just invest the money and make one. Unless your living situation does not allow for it (constantly on business trips, never in one place often enough to keep a desktop set up), towers are the way to go. You can produce a relatively cheap computer, with highly functional parts, by shopping around when they’re on sale, and picking them up that way.

Generally speaking, as long as you verify that the (hardware) of the parts is done properly, and you don’t do anything crazy (looking at you, the dude that I know sawed his motherboard down to ‘fit’ in the case; never do that), you can’t really go wrong in terms of putting it together (you can, but usually nothing permanent; reiterating, don’t do crazy things, i.e. super glue, cutting things, power drills, etc.). If you make a mistake, or don’t like the way a part works, shop around to ensure that you have the ability to return things (i.e. Amazon), and then just grab a different one.

Went a little off topic, but the point being made is that you should, if fiscally possible, build a desktop (or upgrade an existing one). Stay away from pre-built models, as those tend to be vastly overpriced, same with laptops (they are both technologically, and cost wise, inferior to desktops; my roommate spent $2,500 on a Laptop, I’ve spent about $1,600 (total; including lots of upgrades over the years) on my desktop, my computer is leagues above that laptop).

Graphics aren’t necessary, but the game does seem a little heavy (as all games nowadays are), so I’d suggest upgrading. Your most expensive pieces would (typically) be the graphics card, cpu, and monitors, with everything else being relatively cheap by comparison.

well I know how to build a desktop PC - have done that years ago. Would surely take some time to figure out which part do fit together best nowadays…

BUT I just don’t have the need for one… My “old” laptops are doing well - except for playing.
Renting a virtual PC for a month for 45 buck will be much cheaper than building a fast system that I won’t need afterwards.

Not super topical, but I’m shocked you had so few issues playing x2. I seem to remember it having all sorts of problems even on high end rigs up until wotc released.