How is the "atmosphere" of PP?

I backed PP on the second highest level years ago, but did not have time to play it yet (plus: I wait for the physical goods, like manual, background story book etc. to arrive).

One thing that I would like to know, since many people have already played it:

How is the “atmosphere” of PP?

All I care for in a movie/game/book is the “atmosphere”, and this is why I loved the original X-Com and especially the “Lovecraft reskin” TFTD so much! TFTD was gloomier, stranger and more oppressive than X-Com and it had atmosphere in spades. TFTD is my absolute nr. 1 favorite game of all the time and I have played a lot since the 80s when starting on a C64…

So how is PP in that regard, the creature design reminds me of TFTD, but I have no idea how the overall atmosphere is? Is it immersive like the original X-Coms that almost felt like “immersive sims” (with simulated systems that allow for emergent gameplay) or does PP feel more like those bad board-game like Firaxis XCOMs that lack immersion and atmosphere?

p.s. no spoilers please since I have not played PP yet!

p.p.s. I particularly like the atmosphere of exploring the maps and alien structures in TFTD. The maps were large and you started in your tiny sub. The moment of opening the sub door, stepping out and taking a first look at the surrounding area was always extremely atmospheric.

Also when you finally found an alien structure on the map and prepared to enter it. There was so much darkness in TFTD, you even had to use flares or take lucky shots in the dark. Every mission felt like a good, atmospheric horror movie (think of ALIEN from 1979) with a lot of atmospheric build-up and anticipation before or between the fire fights… 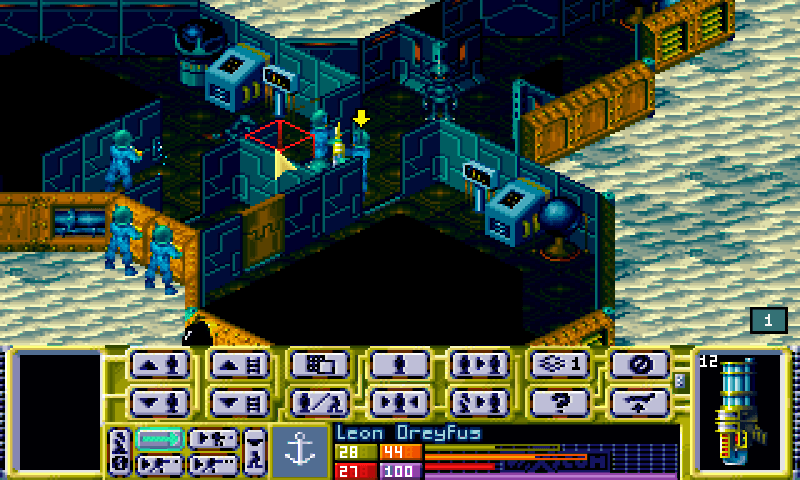 Let it rest for a half year and then come back, maybe something will change in the matter of atmosphere.

Let it rest for a half year and then come back, maybe something will change in the matter of atmosphere.

I had concerns when seeing gameplay videos or when shortly playing the early access BBs - but is it really that bad? Do you mean the bugs, or are important features (that would increase atmosphere) not yet implemented?

It would have been great, if they would have just “ported” the old X-Com into a 3D engine, plus the PP back story (adaptation etc.) and TFTD-like creatures. But no, it is something completely new - the tactical phase, for example, feels less complex (less soldier stats for example), but more complicated!

The original simulation-like X-Com from Mr. Gollop was complex and elegant at the same time - a masterpiece. It is still great after 25 years and even “ahead” of Firaxis XCOM imo…

I would say that it is still beta version with more focus on being playable combat than anything else. There is sometimes atmosphere when you read or hear event text, BUT during the mission… well only night missions offer some excitement when there is not too many enemies during first couple of missions in the campaign. Later you get super-hero fest where you run over the map with one soldier killing all enemies. Or you just kill regional alien boss with one “burst” of sniper rifle (sic!). Really anti-climatic unless you like Power Rangers or Avengers.

I don’t even mention bugs or things that can irritate.

I see - thanks for your answer!

That does not sound good - I loved the slower, non “Power Rangers” stages of the original X-Com and TFTD. The slow, atmospheric exploration of maps with very vulnerable soldiers…

I personally liked the atmosphere of PP, it really felt like a world on the edge of total collapse. The Phoenix project itself is dead at the start, with only a few members left to make it rise again.

The books help as they flesh out the backstory of PP, and they also do a good job of explaining why the world is the way it is. A lot of the in game events are good as well, while only text in some cases, they fit the game well and add to the overall ‘feel’.

As for the state of the game, well pretty much everything Yokes said, although the super hero thing does really come down to a exploit, and you can bet it’s gonna be patched soon.

Edit: TFTD was awesome - but the Cruise Liners nearly drove me nuts!

Yes, I read some of the background “short stories”, they have a good Lovecraftarian atmosphere.

But I was refering to the atmosphere of the gameplay and if it also has this “horror” atmosphere and the “fear of the unknown” atmosphere. So many games nowadays have great looking creatures, but fail to create atmosphere.

Many older games, like TFTD, just had some sprites and created atmosphere through clever gameplay and the use of fog/darkness etc…

Edit: TFTD was awesome - but the Cruise Liners nearly drove me nuts!

Yes, I hated the Cruise Liners too. The deep sea missions on the other hand were all great - always completely dark and you had to bring flares to explore the sunken cities, colonies, “alien sites” etc…

I speak as someone who loves many of the mechanics in this game, but it is still a work in progress.

Based on your descriptions, the atmosphere you are looking for is almost non-existent in this current iteration of PP. Maps are so small you can see to the other side of them, there is no fog of war, no fear of the unknown (except maybe for Sirens hiding round the corner), and no real tension.

I know what you’re describing. I love the forest missions in Firaxis XCOM, where you are hopping from tree to tree, hoping that you don’t blunder into a pod of aliens without spotting them first - and only honing in on your target by following the vague sound cues coming from one side of a completely blacked-out map.

Much as I enjoy this game, there is none of that in PP, and I think that’s a real shame.

Then unfortunately there is a lack of fear, or the unknown in the tactical gameplay, as others have said there is no fog of war or any real atmospheric maps.

Without posting spoilers you could argue that some maps are more ‘creepy’ than others.

If you want my take on it, I think PP is a massively overambitious design which would overtax the resources of even a giant studio like Firaxis, let alone a small indie. I’m pretty sure that’s why JG went for the Epic deal when he did - he realised he didn’t have the funds to recruit the number of programmers needed even to get the basic design built in time. But whether it was the Epic deal, or simply the weight of player expectation, he felt that he couldn’t delay the release any further.

So what we have is a glorified beta of what will be an absolutely brilliant game when it’s done. Right now, they’re still balancing the tactical combat and getting the Skill Tree sorted. I’ll be surprised if they get round to fog or war and adding atmosphere until the second half of this year, if at all.

So Yokes’ advice is the best: wait until it comes out on Steam and try it then. That’s what I’m planning to do for my best mate - I was going to buy it for him this Christmas, but it’s simply not ready yet.

As others said, game’s not ready, and regarding atmosphere there’s some… odd design choices.

Funny thing, the best atmosphere came from BB1: great map, enemies lurking everywhere, a huge boss, and the dread of knowing your soldiers were doomed from the start.

Then unfortunately there is a lack of fear, or the unknown in the tactical gameplay, as others have said there is no fog of war or any real atmospheric maps.

As others said, game’s not ready, and regarding atmosphere there’s some… odd design choices.

That is a missed opportunity - exploring the unknown maps was one of the great elements of X-Com and especially TFTD, because of the larger maps. You even had a short range motion tracker for assaulting Alien structures. You could actually look at it and it had an interface, super atmospheric (not some UI symbols floating in the “game world” that destroy immersion).

I often do not understand why it is so hard to see for developers, why the original X-Com was so good, immersive and atmospheric! And JG made it himself, he should know…

They kept promising Fog of War in the BBs, but it never appeared. I simply think the build is so huge that implementing Fog of War is pretty low on their list of priorities right now.

Yes, hopefully some of those “atmosphere enhancing” features are implemented later on. I am still glad I backed PP (on the second highest level), because JG is an idol for me. I play his X-Com (and the “reskin” TFTD) since the release in the 90s and it still holds up (and surpasses actual games in many aspects).

One thing I do not like is his fascination with “AI factions” since X-COM: Apocalypse. It was much more focused in the first X-COMs when fighting only “creatures”. When I watch PP videos I almost got the impression that most of the time you fight humans from other factions instead of those creatures “out of the fog”…

With the special edition, got it from pledging but not top bottom pledge, there’s a 500 pages pdf on lore. The problem for me is it’s not translated so I only browsed it at lightening speed.

Myself I didn’t felt the Lovercraft mood, and I don’t think it was the real target of PP. The more and only stuff a bit Lovercraft are Sirens, really scary. The investigation around origins and PP origins, is a little bit Lovercraft but it’s only if you want see Lovercraft everywhere.

For me the mood is still good and special, different than the Fireaxis XCOM approach.

Nothing so far in my opinion has come close to the atmosphere of the Fort Freiheit map from the first BB. Not sure if different lighting or shaders or something was used but it just had a certain feel about it.

The days are bright and sunny, the nights clear. A rainy, overcast day or a stormy night mission would be fantastic.

I find that PP gives you the same tension that the original UFO games gave. The atmosphere will be much better once all the bugs and balancing has been attended to, but it is there.

I played through PP several times now, I am back to F-xcom 2 now. PP has definitely much denser atmosphere and better design. The thing I call “heart” in the game. It is definitely better designed as for the environments. There is some space for improvement in sounds and especially, but nothing gamebreaking - I can play my music

There is definitely content missing for now, but hell I enjoy the atmosphere so much more than the one in latest xcom which feels sterile as walking through a hospital.

Well that’s an inspiring idea, I’ve never seen any of these games use weather - rain, snow or thunder storms would be a great atmospheric addition and could even possibly effect combat.

Would be very dramatic at night - I would love an update like that.