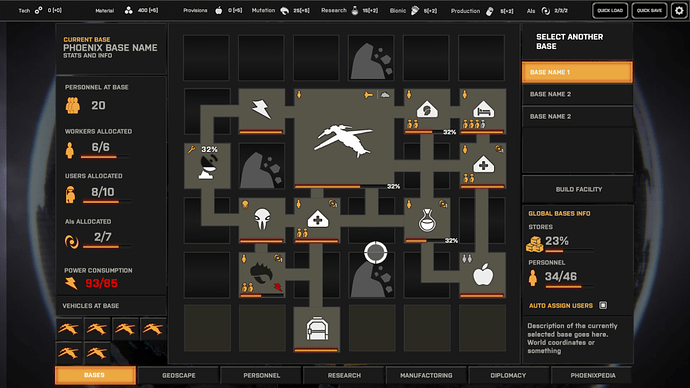 Sheepy’s comment is:
An early base screen reference. Many parts, like tunnels and workers, can still be seen in the code.
Also note soldier placements and assignable AI.

I beg your pardon if it is known (honestly it is the first time I see it) but you can see how they "already " developed a really more interesting system about facilities:

Well, nothing extremly new (since it is conceptually similar to Xcom2 or some other strategic game) but it would surely be 100% better than the current system, at least in my opinion.

I’M NOT ASKING FOR ANYTHING, JUST WANTED TO REPORT SHEEPY’S DISCORD INFO IN THIS FORUM (for people who don’t care about being in discord).

Hm… straight from my imagination of what would’ve been more preferable. Wonder why they settled with what we have now?

Edit: Closer look at the UI in that screenshot, it just looks better in some ways. I like the white icons at the top compared to the green/blue/orange we have now. Even the icons on the facilities themselves look better than the “photo” versions imo.

I just hope they hadn’t time to fully develop it and feared to introduce something else which would have bug the game or make it less balanced.

I hope they are just waiting for the right spot to upgrade the “Facility System” globally.
I would like it even as a DLC honestly, so people can choose what mangement style they want.

Since they already coded really a lot of things it would just be a “waste” if they really aren’t planning to do something similar, DLC or not.

What if it is only concept art? Maybe it was only in consideration rather than in development?

But I really hope they will go this way and finally develop it.

Nope, anyone who is poking around codes/assets will give you confirmation.
There already are a lot of things, the only full lack I’ve seen (regarding general entries) is about how to recruit personnel, not 100% sure though.
Also, Tactical Mission codes are full of entries about “corridors”, meaning that they even started structuing the tactical map.

They might already have pratically everything (maybe not the 3d models).

Could be that this type of system wouldn’t be much balanced for the current gameplay style. They might have chosen to semplify it for avoiding/limiting balancement issues.

Let’s see (I hope so) if they’ll return “back”, sooner or later.