At last I have played BB2 a few times so here are some thoughts about the recent changes and features.

UI
The updated HUD is much more clean and easy to read, especially the weapon and ammo elements.
The TUs bar with percentages displayed for each action is very helpful and when planning an action there is no doubt how many TUs will it cost. The same goes for actions costing WP, everything is clearly labelled and intuitive.
The placement for squad list is better and more flexible. Icons for new crates and open crates, or for near units to heal/repair are easy to distinguish.
About the weapon wheel - perhaps it would be good to display available reloads (x1, x2) to see the current cartridges/grenades/medkits/rockets left without entering inventory? Not sure if it would not clutter the interface though.

Performance
Besides the smaller size of the installer, the gameplay feels smoother than BB1 (on Potato), There are no horrible frame drops at the enemy turn and navigating the map is reasonably fluid. And the free rotation of the camera is a very helpful feature.

Turret
Not quite sure how the turret is intended to work - it’s not a constant overwatch, sometimes it reacts to near movement and sometimes only to attacks. But it is pretty accurate and useful as a decoy or disposable target - even the queen wandered near the exposed soldiers and went for the turret.

Technician
Deploying turrets and repairing vehicles is interesting ability, but the overwhelming use of this class so far is infinite heal and limb fixing.
Perhaps opening locked doors, activating base defences, retrieving computer data, planting explosives would be more fitting for this specialization.

APC
A literal life-saver, when a heavily wounded soldier with disabled legs was rescued by putting her into Armadillo and then finished the mission without problems - pretty awesome feeling.
However the ramming ability should cost WP from the crew and perhaps damage the vehicle a few HP, to avoid simply levelling the whole map with no drawbacks.

Alien turn
Alien speech is a cool indicator for hidden movement, after a few missions you can guess which one is deploying a shield and which one is opening fire, even if the screen is not currently centered on them.
More mutants arriving on the map every few turns is a decent way for maintaining the pressure and keeping the player focused.

General difficulty
BB2 is a lot easier than BB1. More loot in the chests, infinite heals with the technician, deployable turrets and a freaking tank. Won all missions so far, half of them without any soldiers killed, while in BB1 it was more like 1 won and then 1 lost.

HUD adjustment
I know it’s minor low low not important priority, but the HUD elements on left (soldier list) and bottom (TUs bar) instead of sticking on the screen border could be placed with some margin from the edge of the screen, to be aligned with “objectives” and “possible damage” on left, and soldier icon and “ammo clip” on the bottom. Sticking it to the screen borders without any space around reduces overall readability. 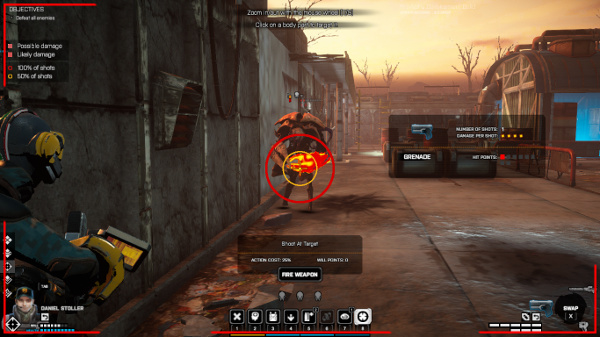 Also, in console games sometimes there is a video option to calibrate screen size in order to fit TV/monitor by adjusting visible UI elements to the borders, perhaps it could be used in PC games too?