Since the Armadillo is here, new bugs will appear. Let’s post it here. 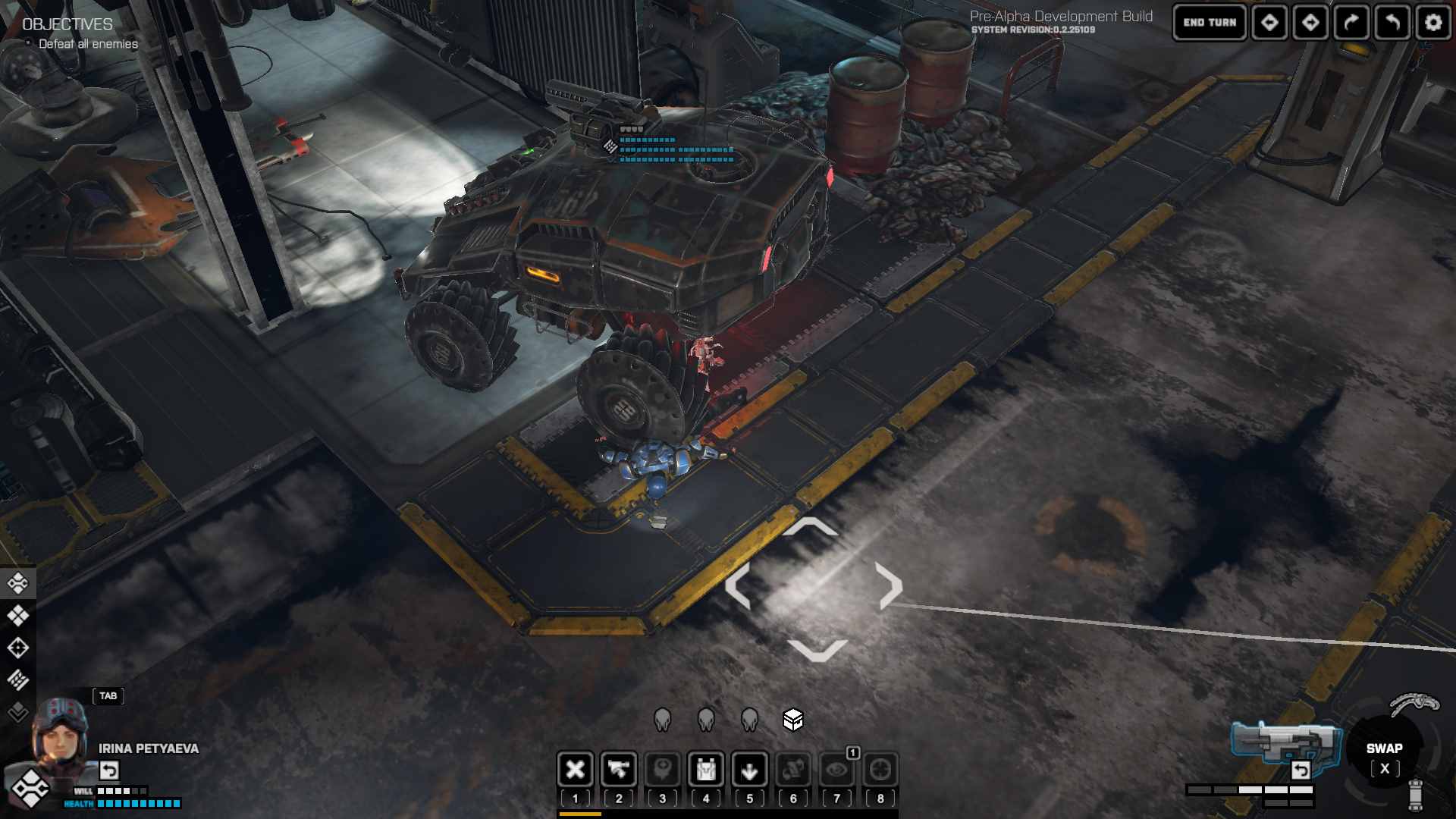 Corpses seem to block the Armadillo’s potential avenues of movement. On one occasion, a crabman corpse in an alleyway blocked off what should have been a legitimate path for the Armadillo to travel through.

Another bug I ran into was when I used the ram (greatly underestimating how far it would go) and it went through the fort’s outer walls and got stuck; it could still shoot and technically do the ram action but it was unable to path anywhere. I was able to free the soldier inside by re-orienting it through ramming towards the map edge to give a valid exit space.

I wasn’t able to capture it, so I’ll try to see if I can replicate the bug.

After executing a ram move, the armadillo goes under the floor textures about half of its tires height and causes serious FPS drops. Talking about something like 5-10 FPS at all times, the drop disappears when you end the turn and the aliens are moving.
Once it is back to your turn it drops to 5-10 FPS again.
What is noticeable when it happens is that the game stops using the GPU, in the task manager you will notice GPU usage drops from 60% to 5-10% on a GTX 1060 6 GB.

Also, it will be unable to move, when trying to ram your way out of the ground, it throttles in place…

Not sure if it’s a ‘bug’ as such but I’ve found there’s no way to reload the Armadillos machine gun turret. Is this the intention or am I missing something? It’s quite a powerful weapon so maybe they don’t mean for us to be able to restock it at the moment.

EDIT: Also the picture above made me laugh a lot, looks like the NJ soldier managed to somehow run himself over haha

Not sure if it’s a ‘bug’ as such but I’ve found there’s no way to reload the Armadillos machine gun turret.

Armed with a roof mounted turret, the Armadillo is capable of taking targets down at range. While lacking the armor shredding capability of the Heavy’s LMG, it still packs a punch and has unlimited ammo.

EDIT: It’s not a bug. @UnstableVoltage confirmed here that the Armadillo has now limited ammo.

Things changed since that update was written. The Armadillo now has limited ammo.

I charged with my armadillo towards the large boss monster, who happened to be on the bridge. This got me stuck on the edge of the map where there is no lower tier (entrance area).

I could not get my soldier out of the Armadillo, nor move or charge out of being stuck.

Despite this, I had a blast driving it around and am really glad to see vehicles included in PP!

I have to make every unit leave the armadillo then re enter it every turn to continue to the aliens turn because its not reading the unit as on the map.

While it’s not fixed, you can press backspace to end the turn.

I have to make every unit leave the armadillo then re enter it every turn to continue to the aliens turn because its not reading the unit as on the map.

You can’t end the unit turn but you can end the turn itself with the button in the top right.

thanks that helps alot

Once you place the armadillo middle of a bridge and you get the soldier out, the queen has to turn around the pit to get to your soldier. By moving your soldier from behind to in front each time the queen is near, you get all the time to kill the crabmen and then easily kill the queen.
I think that once the armadillo is empty the queen should climb over it.

At one point, I rammed the Armadillo into the maintenance pits in the random map, and it just…got stuck. Completely unable to move. However, I was able to get it un-stuck by ramming it away from the pit.

Can any standard type of ammunition be delivered by inventory and used?
Please correct this, or make ammunition avail in crates

I see people used armadilo to block queen paths, which isnt smartest AI behaviour. Qeen can also ram and kill the vehicle in two charges or so if engeener is not near to repiar. So its nice exploit to users but should be patched ASAP that queen tries to go around exposing itself and making it an relatively easy kill with combo of weapons / granades / rockets.

It also looks like queen has lost some of additional abilities beside charging in backer build 1. As we have engeener now to cure limbs ,queen could heal crabs too …

When you enter Armadillo with a soldier who doesn’t have anything on quick selection ring, after animation of him entering the vehicle, game doesn’t see soldier inside. You can move this soldier next turn, but he is invisible.

And if you don’t move soldier get stuck there and can’t move.

Also had ‘unable to move after ram’ issue. On second gate pillars in Fort Freiheit.

I can affirm the bug that entering the armadillo without equipment does not give control of armadillo and also traps said soldier inside the armadillo. If you then enter the armadillo with another soldier that actually has something equiped you are able to drive armadillo away.
Any Soldiers that had been trapped inside armadillo then can walk around again but are invisible.

Just a very minor one… The Armadillo Spawn point in Alien case base. I have had it happen twice, the entrance to the armadillo blocked by some random alien plant against the wall of the cave. On the first move no one can get in, to drive it.

The easiest work around was to throw a nade and destroy the offending plant that was blocking the door. Done the job but then put the squad a grenade and a move down. Very minor, but maybe making the spawn point of the narrow cave systems just a little larger? Or maybe making the squad start at the opening to the cave on a larger plateau, then entering?

Has only happened on the alien base systems with the very narrow caves.