Can you please add jump move to soldier movement? In the situation on the below picture my Heavy could not get out of the room because the floor tile outside of the door was destroyed by grenade. It really changed his possible paths. And don’t say they can’t do that because they jump through the windows to 2 squares away tiles. 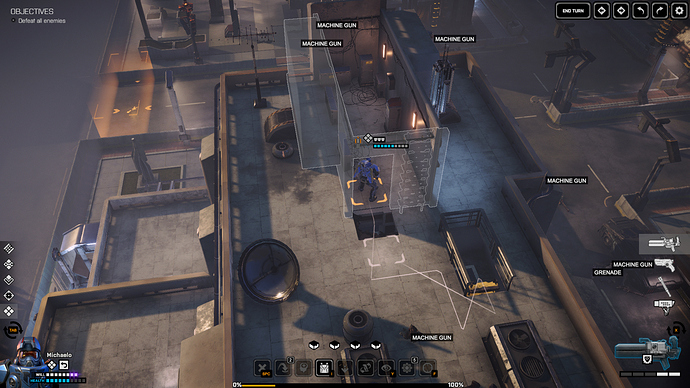 What build is that? Looks like the previous build, and now i remember how better it looked in comparison to the new weird washed out full bars

You can’t jump down to the first floor?

I think i could with most of my troops…

It is previous build (BB3).

He could go down, but I really wanted him to stay on that roof.

That would actually be really cool if soldiers could do that!

Having soldiers able to leap across gaps, even of just 1 tile, is a wonderful idea! Have them able to jump 2 tiles or more if they’re leaping from a high roof to a lower one, too. Perhaps soldiers can also leap, catch the lip of a roof, and pull themselves up. Simple parkour maneuvers like this would add a lot to the game, and give us more of a reason to like highly mobile units other than the fact that they can cover more tiles in a given turn of movement.

I cannot imagine the nightmare that would be to animate a whole set of parkour moves.

Honestly, I’m fine with just one tile as long as it makes it to the game.

Grapples are already planned, yes. But it’d be nice to not have to use it just to cross 1 tile on a flat plane.

Also, imagine if this jump did make it into the game. It would cut down on a lot of cheesy strategies; i.e., shooting out floors in front of doors so enemies can’t go through. They can just jump the gap. It’d make the game a bit more challenging, but also more fun for you since your soldiers can do the same.

While we’re at it, let’s include jump capability to go over small/short units, like mindfraggers and fireworms. And maybe turrets. Despite their size, they can still occupy a full tile and make it impassable. In such circumstances, you might not have the time to kill them because you need to move on to take a different action. So just allow units to jump over these tiny units to the opposite tile.

The queen has already gotten animations for climbing over barriers and the like.

@Setokaiva where’d you read that grappling hooks are planned?

@Kings_Rook In the initial discussion of things the devs said they would like Synedrion’s “Infiltrator” class to be able to do, I believe. In addition to things like drone hives and explosives, I’m pretty sure grapples were on that list.

Makes sense considering they are more like spies and saboteurs.