Range +5000000 acurracy + 5000000 kills in 2 turns. Splash range + 10000.
This is stupid. Even if I hide under the building the splash damage reaches soldiers deep inside the building. Also even if I hide between the walls their accuracy is way to stupid. The farther the range the scatter should be grater, not laser guided death bomb of destruction. Additionally it shouldn’t be a MIRV but a single projectile. First turn chirons happily fires scatter shot hits every soldier for 200 acid, and they are dead in 2 turns. 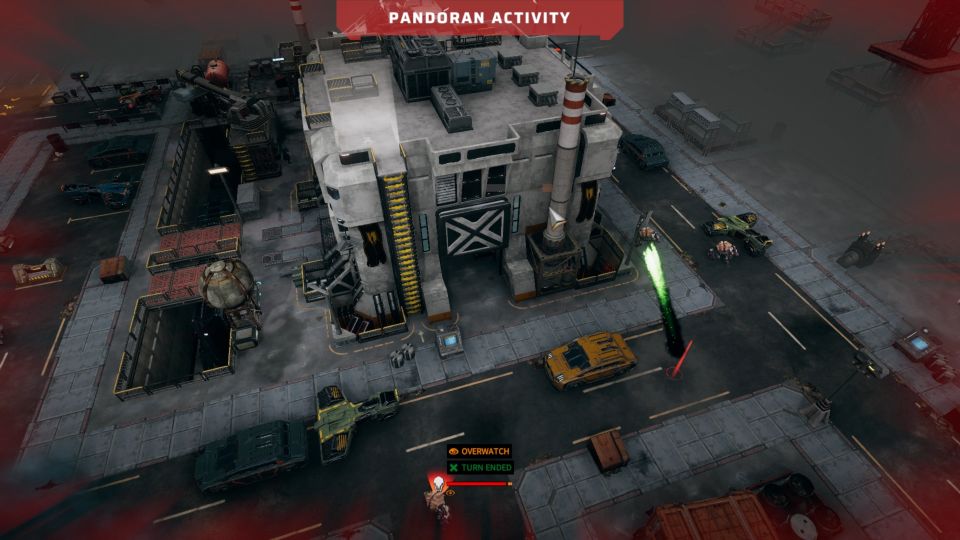 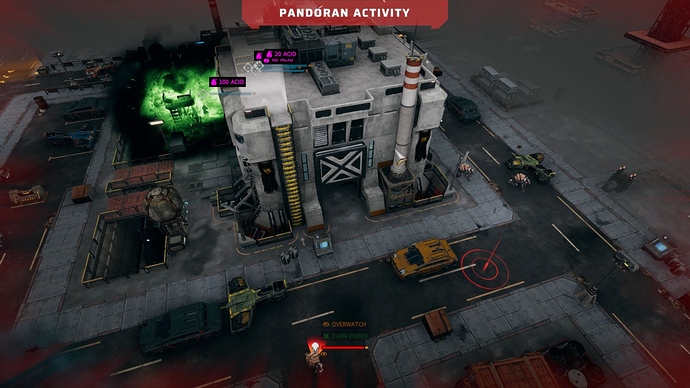 This angle should not be possible. All soldiers inside the building got splattered. And that is one Chiron, The second just seals the deal.

Agree totally. Many voices here asked for acid to be more potent. So, unfortunately, we got what they asked for… Enemy now has OP acid and the acid weapons the player gets don’t even come close (if they even exist). Where are our acid grenade launchers and missiles? Why are our acid weapons so lame compared to those given to the enemy? No, you can’t make me say that forbidden word - balance. It seems that with every step forward, we fall back two. Balance appears to be an after thought.

It seems that with every step forward, we fall back two.

We serve as cheap (even better, we paid for it) QA to those which apparently didn’t even check how their changes behave ingame.

Yeah, I got the impression that devs did not play this game.

Hard to say if it is problem with Quality Assurance or the Design Team. Maybe Quality operates within borders which Design imposed. For QA everything may be alright if specification allows for such values.

I think all of the explosives Chirons are too strong, they should be less accurate/ less projectiles/ less range

Well I did ask for acid to be more potent, but it was understood the wrong way.
What I explained is that it takes too much time to have an effect on the enemy so we have to use other stuff because we can’t let the enemy survive that long.

We have an asymmetric situation where:

I was asking for a correction in this asymmetry by having acid more helpful. Only Anu had acid grenades and that meant running a soldier to the evac if it got hit.

Now, that everyone has acid, making it more potent doesn’t remove the asymmetry (it’s even worse since somehow the enemy always does more damage than us) and your soldiers die quicker.

In the end, the problem with all those “DoT” (poison, acid, virus, …) is that the game is alpha strike oriented.

In the end, the problem with all those “DoT” (poison, acid, virus, …) is that the game is alpha strike oriented.

I agree that the situation is assymetric and that the reason for it is alpha striking by the player.

Put simply, alpha striking is very easy, always available and is the most reliable way of dealing with any tactical situation, especially Chirons. The only thing that is even easier is casting electric reinforcement twice and then recover each turn (which makes the whole squad all but invulnerable and can be done every turn).

But as soon as you step out of an alpha striking scenario, it can make sense for the player to use acid weapons. The acid cannon is guaranteed to eat through any armor in one turn, and deal massive damage on the next.

All this to say that yes, acid needed buffing, and now its need nerfing (which is already on the way:

There is something wrong with explosives and acid

It’s something we’re aware of and looking into. We recognise that currently acid is doing too much damage. (applies to grenades in some cases too)

For explosive Chirons the biggest problem IMO is the (occasional and unpredictable) double damage from explosion bug. Without it, it would be quite hard for an explosive Chiron to one-shot kill/massively cripple one or more squaddies.

The acid chirons are the most egregious as there’s almost no counterplay to defend against them. At least with the arthrons their weapon is short ranged and it can be destroyed by shooting the arm.

For explosive Chirons the biggest problem IMO is the (occasional and unpredictable) double damage from explosion bug. Without it, it would be quite hard for an explosive Chiron to one-shot kill/massively cripple one or more squaddies.

Even without the double explosion bug, it still wipes out your party in X turns. And even if it doesn’t it leaves all your troops critically crippled.

I would do away with acid entirely. It adds nothing but another layer of complexity to balance which is too much at this point.

Phoenix Point has potential but in all honesty it’s clearly a crypto-Early Access release. They really need to focus on ironing out the basics before tackling more complex effects.

Even without the double explosion bug, it still wipes out your party in X turns. And even if it doesn’t it leaves all your troops critically crippled.

I’m talking about the explosive Chiron, not the acid one.

I can’t recall right now the exact damage per projectile of the explosive Chiron, but it’s really not that high (maybe 50?) with low shredding (under 10, IIRC) and AoE of 3(?) tiles.

It launches 3 of these with very low chance of 2 or 3 of them hitting the same target, unless it has the stability stance ability, with which after activation it can launch 5 projectiles with higher accuracy. (But for that it usually needs an extra turn, as it costs 1 AP and the Chiron likes to move before firing).

IIRC it has ammo for 4 regular salvos, so 12 projectiles.

Even if you are very unlucky and wear only light armor, the Chiron should only be able to wipe out/cripple a whole squad if they are all standing together in a very small outside space, because damage per projectile (50) - (armor (say 20) - shredding (10))= 40. That doesn’t cripple any body parts. With some bad luck two projectiles can hit the same target, crippling some body parts. And that’s with light armor (which in all fairness should have some penalty for the buffs it provides) - with heavy armor no body parts will be disabled even if hit twice.

However, with the double explosion bug the bad luck scenario of two projectiles hitting the same target can easily kill/disable a bunch of squaddies.

I’m not saying that it doesn’t need a nerf - perhaps it does, but it’s hard to say until the double damage bug is fixed.

double damage grenade bug needs sorting, as its extremely potent with any DoT or explosive against and for the player.

on top of that for the acid status effect I think the best solution would be to apply the same damage calculation as incendiary to the overall HP pool. this will prevent it from dealing insane HP damage numbers by stacking the damage done from different limbs, while still being powerful enough as to not be ignored.

its current armor shredding effect should stay, as that is the useful bit for the player. (how to use it effectively for the player, well that is a puzzle I’ve yet to solve…I suspect it involves overwatches)

explosives apply the highest damage done to any limb as damage to the total HP counter, unless the loss of limbs “caused” more total damage by cutting max HP down. this can cause explosives to hit harder then their max damage but not “double” it can generally be identified by opening the enemy info panel after the hit and checking if max HP = current HP. especially late game explosives and the fury group launchers tend to do this on tritons/arthra as they hit hard enough to delimb pandorans very fast

I suspect it just becomes a massive damage stack, as this shows the radical difference in its effect (armor really does good work when fighting sequential hits, also shows that big bombs solve many enemy limb problems)

Even without the damage bug for explosions, acid chirons really are unbalanced and unfun, if you encounter them in a map without buildings to hide in then it’s better to just evacuate. They are so long ranged and accurate that they can hit you even when you’re hiding behind cover. They even fire more shots than the worm chirons, 4 acid blobs to 3 worms!
What was the designers reasoning behind this? I hope this panda is nerfed heavily in future as it really is a micky take.
Trying to take on a lair with one of these things guarding it is hellish. 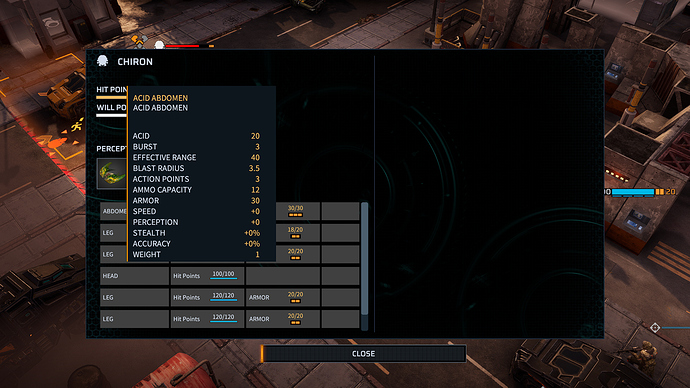 It’s 3 projectiles with 20 acid strength, unless the Chiron has the stability stance mutation, and has activated it (in which case if I’m not mistaken it launches 5 projectiles with more accuracy).

The problem IMO is double explosion and the fact that damage from acid to all limbs is added and then subtracted from the total HP pool. This sounds like a good solution:

apply the same damage calculation as incendiary to the overall HP pool. this will prevent it from dealing insane HP damage numbers by stacking the damage done from different limbs

And/or subtract armor from the strength of the acid, so that if you are hit with 20 acid on a body part with 20 armor, the acid will eat through the armor but not do any damage to the HP. This way wearing heavier armor would really pay off.

apply the same damage calculation as incendiary to the overall HP pool. this will prevent it from dealing insane HP damage numbers by stacking the damage done from different limbs

This would be too similar to incendiary. Currently it is too similar to poison. They should really go back how it worked earlier just quicken damage as I have described it in the similar topic.

Acid is insane... why did you think this was a good idea? Game Feedback

I think they should go back to previous mechanic, but allow acid to deal damage faster. For me it should deal damage equal to round_up(damage applied/20,0)*10, and it’s potential should be decreased by amount of damage dealt. So maybe I will show it with tables. Below examples assume soldier has 30 armor on each body part (so in current game terms equivalent of not buffed heavy armor). previous method: effect applied 10 left 20 left 30 left 40 left 50 left 60 left turn 1 dmg 10 0 10 10 …

That way it would be still perfect weapon to deal with armors and wouldn’t punish soldier too much with damage in subsequent turns. Unless enemy will hit you again with acid.

But well - many hits should be lethal in most cases.

If only you’d kept quiet on this issue, haha

I feel there’s too much focus on mechanics in this forum, like everyone thinks they are a game designer. The actual games designers listen to those that scream loudest, especially if there is a group shouting about something and then take on board what they are saying and implement changes. However, players don’t see the game as a system in its entirety and don’t understand that changing one aspect affects /the whole/, and it’s possible that even the game designer’s don’t fully grasp this either because the system is more than the sum of its parts. So everyone should calm down on their suggesting of specific solutions, assuming they are right all the time and arguing down anyone who disagrees with them because no one here actually knows that much about what the affects of any suggested specific mechanical change will actually be. All that’s happening is that time and again players who believe they cannot be wrong are /making the game harder/ for everyone else that plays, as the game designers /overreact/.

So, you suggest don’t try to make game at least normal, but delete it and come back after few months with hopes, that someone in Snapshot by himself manage how to make game better? I don’t believe in wonders )))