Which event is necessary for Fungal Food Production?

I have now started a new campaign thanks to the changes (cthulhu) in skills that have finally started in the right direction.

Now I have researched everything from “my” research tree and I am wondering which event is necessary for “Fungal Food Production” ?

Does anyone have any experience with this?

Fungal Food Production, is a Discisples of Anu tech, so to get access to the Food production facility you need to steal their tech or ally with then.

Probably changed to stop the the meta of building many food facilitys and trading with all the havens for resources early on the game.

I will play tomorrow again, right now Reputation with Disciples of Anu 49% and diplomatic mission was activated, so I think Allied is the answer, that attitude will unlock several techs including Fungal Food production

Fungal Food Production, is a Discisples of Anu tech, so to get access to the Food production facility you need to steal their tech or ally with then.

Ouch, that’s a big problem, as food is the only resource that is getting drained by default. The questions is: do other factions provide rooms that would provide other resources for trade? Naturally, I need to get a feel for the new balance, but it seems to me, like allying with Anu with be the default path for moi for every playthrough. Stealing tech is far too unreliable.

resources aren’t so much scarce, so you don’t need food production

True that. First few plays I did without any food production. You’ll end up having thousands anyways. It’s not that good of an investment given the upfront cost and the ROI.

You need Aligned status with Disciples in order to get Fungal Food Production,

REP 50+ with Disciples is easy 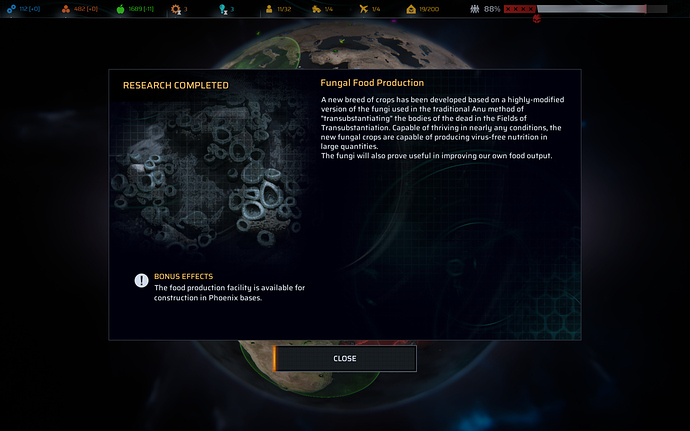 Ok thats new. In my playthrough 5 months ago it was not that way…

Yes it was. Like I said, my first few campaigns went through without building food production facilities. They are overrated - well, I suppose it depends on how you play. How much coverage you have on the map to be able to respond to haven attacks and generate resources that way.

I can tell you that i would LOVE to have them now. Most of my recruits, (the ones not from Havens), don’t have armor because I can’t produce it, and one only has grenades, (that I got from a scavenger mission). I sweat how much materials I’ll have to spend after every mission replacing ammo.

I’ve found 7 bases so far. I made the mistake of activating the first 4, what a waste of resources. Now I leave them sitting there because I don’t have the materials to activate them.

My problem is that Anu is usually my faction that I raid for the aircraft. There’s no way i could make my own, (or vehicles). I got the blimp from them early on and now for some reason they don’t care for me. I also did that Japanese sword mission, which didn’t make them care for me much either.

I’ve done every scavenger mission I can find. I’ve done every haven defense mission I could get to in time for, (blimp makes that a little tougher). I’m not sure what else I could do to get materials other than raid a haven, (Anu would have been first choice).

Whats the odds if I raid anu I’ll get the tech? 1 in 5? I’ll probably have to take that chance because that will be quicker than trying to build up rep by haven defense missions. I hate when all the haven defense missions happen on the opposite side of the planet and there’s no way you can get to them.

Food Production Facilities take around 53 days from when you start building them to the point at which they break even. Until then, they’re a net loss.

I just completed a campaign (without the new Ancients DLC stuff) and never even ran across a Disciple Haven, never did any missions for them, and never produced the food production building, and I was sitting on almost 2k food by the end of it. As long as you’re exploring and looting, you should never run out of food.