This right here is when I have a problem with Sirens

Just look at this shit. None of my troops are higher than level 5. And this is what I have to deal with? 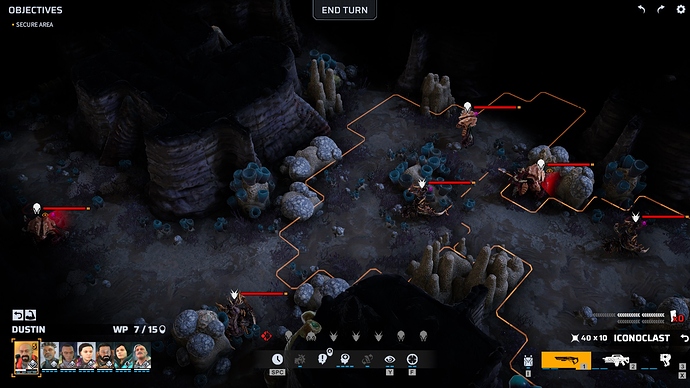 Each of those Arthrons can deal enough damage in one burst to almost kill any single one of my troops. They may still live, with about 10-20 hp left.

l gave up on this game,this game is totally unbalanced and unfinished,l had the same problem with the crabman and the explosive bomb abdomen too,l should have buy this game on steam because of the modders there,l am coming back after half a year for the update,l hope they really fix and improve the game, instead working on dlc,maybe if you are the legendary Christopherodd,you can have a chance beating this game in hard or legendary

I don’t even understand how Odd plays so well. He will do tactical things like “let’s move our heavy out here in front so he takes the brunt of the attacks”. I try to do that, and the enemy completely ignores my heavy, who is out in the open, and instead takes a shot across half the map at the dude who’s bleeding to death huddled behind a lamp post.

I don’t even understand how Odd plays so well.

After have read your comment I started watch the let’s play. At beginning of the campaign it’s like he has a lot of chance too. But I guess there’s more, what’s weird is he couldn’t see instantly or very fast why some base slots can’t be build, and make confusion with attributes costs and levels, so I can’t say he is a genius.

But nope with only 10H of previous play and despite a lot of differences with similar games (I know) he seems already master more or less the combats.

Form watching parts of some XCOM1&2 and LW2 let’s play, I think a lot of misunderstanding is coming from unexplained elements directing some choices, but either not detailed either somehow intuitive.

That said there’s some elements I suspect and I didn’t noticed, I thought zooming was just a view change but now I wonder. My experiment of obstacle destruction wasn’t that great and it lead me ignore it later a bit too much.

But anyway I only saw first parts, beginning of the campaign is different. I’ll try watch at least when there will be later enemies starting with Cheron and Siren.

The main problem - maps are way too small. So enemies can spawn near your squad.
Another - difficulties are unbalanced and unrefined.
I have played 100+ hours starting 1.0.54581.
Truth to be told, I havent experienced impossible situations. As I said somewhere, it’s just a matter of exp.
More annoying was 1st NJ mission, when you have to fight your enemies being at least lvl 3 (maybe 4) with your lvl 1 squad, which is bs…
Or like fighting 2-3 explosive Chirons in one mission (you are totally ok if enemy cant see you directly

I’ve run into a pack of 5 Sirens with Panic Scream attack on my second mission with them. So I had to restart the mission and kite them and lure into an ambush where my shotgun and Hel cannon guys could get rid of them. Sometimes you just have to run. I admit it is difficult to run from Frenzy Sirens though - they have a lot of move points))
Well, I guess some battles are not meant for winning. Retreat is also an option.
Come back later and hope the situation gets better. Remember: you only have to destroy two objects in this mission, so be creative))

Destroy two objects? That’s not what it told me. It said to kill all enemies. Or secure the area, or whatever. I had no choice but kill everything. Unfortunately all those enemies were within one move of my starting point. I just reloaded and decided to get some levels first.

I don’t even understand how Odd plays so well…

He plays max difficulty, day 25 he only got one Chiron, that ridiculous, the game is totally mad on difficulty management, there’s very obviously huge bugs here.

It’s not uninteresting to watch, but it’s borderline, at Easy, day 20 or even before A Chiron and a Siren in same mission. Where are they at Legendary? Facepalm.

EDIT: Could come from a huge difference I noticed, I rush much more get a second ship, but tune widely difficulty of combats on that, it’s plain mad design.

EDIT: It’s like replacing soldier death. At Easy it cost a lot more to recruit (forced equipment buy) AND equipment is plain lost from death, at Legendary this cost a few food and no equipment lost, one more difficulty design huge bug, that’s disgusting. Ok Legendary has to face other troubles particularly with elite recruit, but it’s not looking anything Legendary compare to Easy, sigh. It’s not with XCOM1&2 or LW2 that there’s such difficulty design absurdity.

Please WHERE is this location?

There is no pointer for the “Siren Vivisection” mission.

If I recall correctly, the mission that started the thread was Into the Catacombs. A previous patch toned it down quite heavily.

Have you captured a Siren?

Thanks. That’s what I’ll loos for.