Hey again, guys! I mentioned in Discord chat, and a couple of people agreed with me, that the alien buildings we’ve seen in the concept art (https://phoenixpoint.info/blog/2018/7/23/distinguished-havens) look a little reminiscent of the Zerg from starcraft–lotsa green and purple, scythe appendages, etc.

Now, I know it was just concept art and it’ll probably look a lot different once the rest of the team implements it into the game, but as a suggestion, have you guys thought about using IRL fungi as inspiration? I think it would make sense for Phoenix Point, since the origin of the aliens explicitly homages Lovecraft’s “Fungi from Yuggoth,” and fungi can take some very strange, unsettling shapes. Look at these: 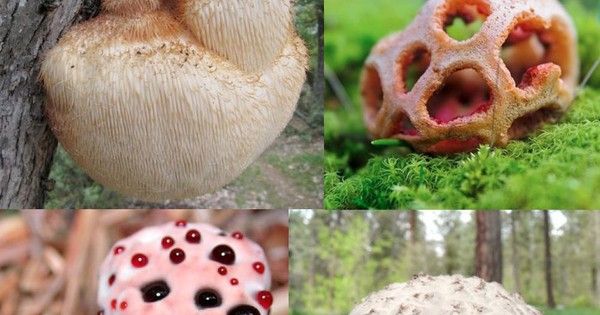 These specimens of the fungi world are both beautiful and strange.

Puffballs, indigo milkcaps, latticed stinkhorns, and especially bleeding fungus could make for great creepy buildings for the pandora virus! What do you guys think? :o

Great idea! That stuff will fit in both thematically and visually.

Another option is to get the art team a trip to a diving center and have them do a night dive. Sea cucumbers at night look like “Lovecraft meets Giger”

Yeah. Also, it just occurred to me, but coral, sea anemones, and sea urchins (while being animals) would also make good alien buildings, since they’re stuck to one place or look heavily defended (in the case of urchies).

IMHO, I don’t see aliens as builders. As discussed multiple times before, they are not really minding us as a threat at the begining and should’nt start with structures.
However, the virus should be able to adapt as it realizes how dangerous human is and might start mimicing our buildings later on.

Anyway, I like the idea of large mutated urchies or see shrooms behemot sized used as nesting points for the creatures : this way it isn’t build but still is a structure.