A few ideas in one thread.

When there is not enough AP for some actions and one may consider using the “Exertion” ability for gaining extra AP, there is no “gain” indicator. Therefore the player cannot predict exactly how many AP is needed for performing the action and if using the “Exertion” ability will result in gathering enough AP to do it.
Perhaps flashing “empty” AP bar to mark lacking points and “filled” AP bar for points that are possible to gain could be helpful? The player is expecting to see some preview of AP points’ change, be it decrease or increase, before confirming the selected action/ability. 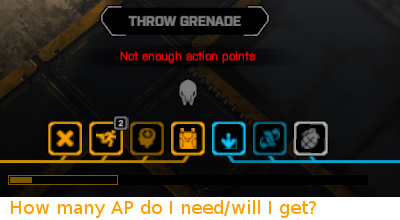 Visualization: how many AP do I need to throw a grenade and can I potentially use Exertion to get it?

Some of the actions, like moving, shooting or opening inventory require confirmation or doubleclick. Other actions, including consumables like the rocket jump or grenade throw are performed immediately after clicking on target area without any additional confirmation.
It would be better to have confirmation after target-click especially when rocketing or grenading.

If the Bleed effect is counted as “damage per turn”, then it should be applied at the end of the turn, not at the beginning.
Example: on the enemy turn a soldier gets shot which results in leaving him at 2 HP and 2 Bleed. Enemy turn ends, now on the player turn the wounded+bleeding soldier could be healed by the fellow squad members or even himself - but instead he dies because the Bleed damage is dealt at the beginning of the turn.

IMO there are two ways to solve this:

Of course this would work two ways and the Crabman with 1 HP and 1 Bleed would last through the enemy turn, potentially shooting someone.
But the current situation when a soldier with a medkit surrounded by other soldiers with medkits dies because of The Instant Bleed That Could Not Be Stopped seems a lot more frustrating.

BTW I love the background details! 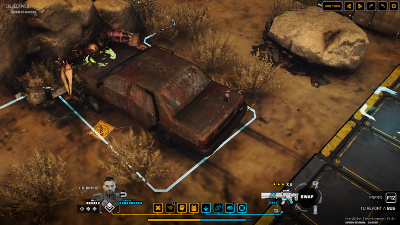 I concur. Given the exertion is not free and in fact consumes mana will points, it is quite important to know how much APs would you get. how far will you be able to go and which abilities you will be able to use.

Now, how this can be visualized? Firstly, slightly lighting up the ability icons for abilities which will be usable after the exertion. Something between not-enough-APs dim and ready-to-go bright, maybe with an small exertion icon right above them to accentuate that the ability will be affected by exertion.

Secondly, a similarly slightly dimmed movement areas should be overlaid on the map to demonstrate how far will the soldier be able to move.

Last but not least, AP pools, costs and gains should be displayed somewhere in the UI. Having bars and coloured areas are good and all but when you are dealing with AP-based turn-based tactical game, doing your math is crucial. As PP has the proper AP-based system, there is no reason to hide the AP values completely. Bars and areas are ok for something simple but when the challenge will ramp up and players will start thinking before acting, exact AP values will be necessary. I think something akin to OGXcom’s “bars with numbers on the side” can work pretty well in PP.

You have my vote, sir. Can probably be optional for those with steady hands or not enough patience to click one more time for each action. Speaking of actions and confirmations, I think there should be a way to stop a moving soldier if you changed your mind about his destination. And/or a way fro a soldier to react on an enemy mid-movement(i.e. stop the movement and return the control back to the player). AFAIR, OGXcom had those movement stopping interruptions on moving soldier noticing an enemy. This one should probably be tied to a stat, skill or perk though, giving such benefit only to soldiers with good enough reaction to change the game plan on the move.

Not sure about this one. I am not against this but I don’t think bleeding at the beginning of the turn is that much of a problem in and of itself as long as it is consistent across all factions involved(i.e. bleeding-susceptible enemies bleeding out in the exact same manner). Don’t forget, soldier being still alive during enemy turn may be useful as said soldier may use overwatch, reaction fire or some other passive ability during that time. plus he will still be drawing enemy attention away from his squadmates.

BTW I love the background details!

It would be better to have confirmation after target-click especially when rocketing or grenading.

When you select destination by click you need also to confirm this? I don’t see this as necessity. You move with right click and don’t confirm this action like with left click. Or not?

And/or a way fro a soldier to react on an enemy mid-movement(i.e. stop the movement and return the control back to the player).

Soldiers stop when they spot a new enemies by default. (Dunno if it’s in the backer build, can’t upgrade my pledge, soo…)

Yeah, you seem to be right, I was able to trigger this after some testing. It seems I simply wasn’t lucky enough before to spot the enemy while on the move.