My first campaign on the full version of the game and I decide to build my second manticore as soon as possible, though I only have 10 soldiers. Well everything goes fine until I fly my second manticore to do some trading with a haven: when my manticore arrives to destination, it can’t interact with the haven. Tried multiple havens and the menu just doesn’t open. The manticore has even some soldiers in it but nothing.

Am I doing something wrong? I remember this being a bug in backer build but is it still a problem in release version? If so, it seems that the other manticore is just glorified hulk which can fly around but do nothing.

Thanks, I owe you one now! I was worried that I used my resources for nothing

pleasure, yep this game can be a little trolly with some glitches like this, i hope they’ll be fixed, at least it isn’t game breaking by itself, just a little anoying

This fix didn’t work for me.

I have older save points where second Manticore works fine, but at some point it cracked out, and all “move” buttons are greyed out. Screen shot shows that it may be in between finishing an “explore” event; see the little yellow hashes? I expored the site with another ship, and the hashes were still there on bugged ship. 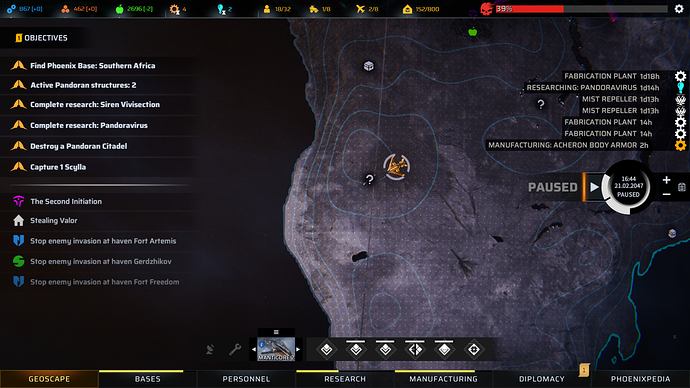