Yep, agre with yokes about the techies part. It may be a good idea to think about rebooting your game if you end up fighting too armored annemy at a point you feel like you can’t fight against them. You may have took too much time to evolve / upgrade, it’s part of the gameplay, and is, all in all, the “only” way to really land to a game over.

It’s not so different than in all xcom games (being the old ones or firaxcom) or xenonauts. Researsh, developement (and diplomacy, in this one) are key of the victory, it’s a race. If you have failed your start, it may (but it’s purely subjective) be a good idea to start over rathen than pushing more and just leaving the game cause you feel trapped.

The scenario quest are repeaded exactly identicaly on every run, but their is also a lot fo randomly generated content making the game not looking too identical if you start over.

Ennemy mutations won’t be showed in the same order, bases locations will be totaly different, your staring base itsef can have different layout with more or less space to use, you can be more, or less, lucky on gear drop etc. Ending with totaly different results ^^

Also, on top of weapons themself, some classes can totaly change the game (not speaking about sniper this time haha). A faction priest for example, can let alone take care of ennemies like chiron at cost of just 2 ap with a single perk lvl 2 (or 3?). it’s achievable in two or three weeks of game, before they even start to appear assuming you focus more on one or two factions than in game main quest (witch, i’ll definetly agree, is counter intuitive but heh). Once you have a faction tier 2 classes, you can focus on main quest a little and should be far more peacefull ^^

I’ve literally been racing to do everything. It doesn’t help that two of my first faction missions were on the other side of the world. Also, I’ve put a good 20 or more hours on this playthrough. I’d rather not have to throw it away because the game suddenly decided to spawn ultra armoured enemies everywhere.
If it’s “part of the gameplay” then, as I’ve been saying, it’s a bad part of the gameplay and it needs reworked.

There’s not even diplomacy. It’s just random missions, usually against other factions. Which is terrible because it seems you need weapons from every faction to be able to combat the variety of enemies you come across. I also made another thread about stupid rep loss for things like accepting a gift from a faction.

I haven’t seen a single priest yet. I’ve got specialist units from Jericho and Synedreon but no priests. Honestly, finding the other two specialists a bit underwhelming.
If each playthrough is mostly dependant on luck (having factions research useful stuff earlier, enemies not developing their best upgrades, finding bases easily, faction missions being nearby, etc.) then that’s also bad game design because it eliminates the role of player skill. Or in this game it’s more that you need luck and skill otherwise you’re just steamrolled when the enemies get upgraded.

Just to be clear, if I sound annoyed, it’s not directed at you. Your advice is appreciated, I’m just annoyed at how the game progression has been designed so badly.

Haha no worry i don’t take it personaly ^^

I don’t want either looking like i want to defend the game at all cost, i must agree he have some issues (not saying a lot cause in my case it’s honestly “okey” while not perfect)

I don’t know what to say, according to epic games i have 25 hours in, witch was 3 different games start of about 4-5 hours each that i just dumped cause i do bad decisions early on and started to focus too much on things that are’t a priority. So my actual game is probably ~13 real time hours in and i already have 2 of 3 factions that gaved me their elite soldier type, fully shared their actual technology and even invited me for their wedding ! Ok, i lied for the last part

So honestly, even with luck leaved appart i think you had some issue in your developement road, witch is pretty normal i’m pretty sure noone had be able to do a perfect run nor even an “ok” run on the first try as the game definetly take player by hand, except maybe for wrecking the said hand.

I did some hard decisions making, chosed to literaly abandon half the damn planet to mist, defended about 50% oh havens attacked while leaving some tha ti considered not importand fall over. Everyone can’t be saved, i had to focus on making pawaaaaar.

At the curent state i can achieve a fully 2 vehicle teams that both solo their missions either using or not using the biological vehicles depending of missions, and can clean 2 time as much mission while rarely, if not never, having to return for healing (i just return to “rest” when they go below 50% energy). 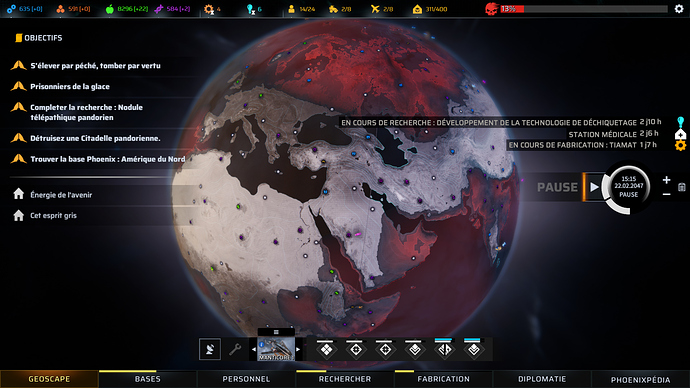 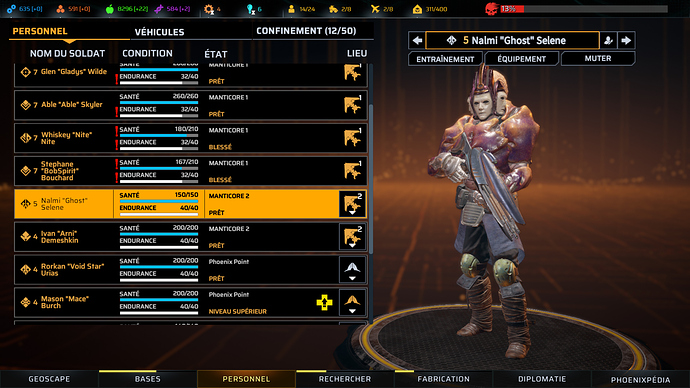 Spoiler of what "kind of tool you can unlock, only read if you don’t mind spoil of future ^^

[spoiler]An augmented priset like the one upside can by itself wreck apart ennemy. Destroy one head, mind control the poor thingie (even a siren or some mortar) and #yolo you have a free, disposable 500 - 800 hp meatbag that will kill half of his allies for the cost of literaly nothing but a sniper bullet in the head and a lvl 2 a priest spell that don’t even cost ap or wp to launch (while still draining willpoint every turn ;p).

His lvl 3 ( 3 ! ) perk make you able to make any enemy that his seeing (no range limit) instantly panick assuming the priest have more will than the ennemy, witch is easily achieved on most enemy just by stacking will, or can be achieved by destroying ennemy head, witch is usually where their will pool is located. The skill cost 2 willpoint, but a mutation make the priest able to recover 2 willpoint per turn, efectively making him able to disable an ennemy per turn. If you have 2 priest on the team with this augment, witch is an area of effect, both priset can recover 4 will point per turn if they stand near eachother, making them able to disable 2 ennemy each, every turn, literaly at no cost.

Considering this skill don’t cost AP, only WP, you can even push the thing farer, and use the “take rest” action and convert 4 ap to 50% will point, and if the priest is maxed in will point, it can represent 11 will point + 4 through augments, every turn, so 7 ennemy disabled every turn x2 if you have 2 priest, indefinetly, every turn, without range consideration, or ammo, or consumable, just free control. Only line of sight is necessary.

It’s just one of the strategy, and it only request a faction rank 2 and level 3 soldier, that you’ll agree isn’t “that much” ^^
[/spoiler] 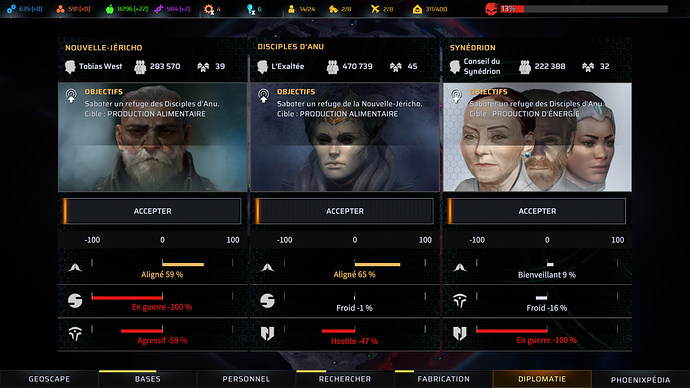 The priest does sound powerful. Though I think my main issue would be destroying heads in the first place. A sniper can manage it for the simple enemies but I don’t have any armour piercing weapons or armour stripping weapons that would help with the bigger enemies.

Also, I’m not convinced it would be so easy to panic every enemy, haha. Most on my game seem to have 20-150 will points. So I’d have to completely sacrifice movement points to boost my priests up to a level where they can contend. That or use the party pool, which I prefer to keep for when units hit max level and still have a skill or two I want, or when a unit is one or two points short of an upgrade.

So, one thing I maybe haven’t rushed particularly well is the story missions. I’ve been rushing to help factions, explore, find bases, destroy alien nests/lairs, research and all that stuff but I’ve been a little slow with the story.
Is it progressing with the story that gets you weapon upgrades that can deal more damage or pierce armour?

not really, main story and researsh does grant you usefull tools (immunity to some late game effects, better heal packs etc) but the weapons themself came more from faction “gift” if they like you enough or from stealing to them ^^

The only rare gamechanging weapons on the relative early game is when you autopsy a crab and vivisect them later on, where you’ll be rewarded a really handy grenade launcher, and a freaking gatling gun that does really decent damage and armor removing (far better than the handcannon).

Otherwise, it’s all about factions and diplomacy ^^ Unless you can unlock things far latter but i’ll have to discover it :’)

It’s even worse that I can’t even bring up all my issues as feedback because there’s a limit to the amount of posts you can make per day. It’s only 5! I’ve already posted 5 yesterday and today because there are so many issues.

I can relate to your pain, friend. The post limits are really stupid, a human could easily see we are not producing spam and so let us post once every 10 minutes or whatever.

I guess it is necessary, though… since no one from the Phoenix Point team reads the forums, so how could they manage this themselves

Hmm. Maybe destroying the lairs was a mistake. With more haven attacks I could raise my rep faster… Though, I think a lot of my being behind the difficulty curve is down to having my first faction missions spawn a world over. Had to go from south Africa to Antarctica, which meant going up through Greenland, through North America, South America and then finally to the Antarctic. Which I had to scan my way to because I hadn’t gotten the faction haven locations because I had to beat their quest before they would give me that…

The grenade launcher was terrible in backer build 5 so I wrote it off. They might have improved it so I’ll see about grabbing one and giving it a try.

I can relate to your pain, friend. The post limits are really stupid, a human could easily see we are not producing spam and so let us post once every 10 minutes or whatever.

I guess it is necessary, though… since no one from the Phoenix Point team reads the forums, so how could they manage this themselves

Yeah, would be nice if members that had been around for a few days or who had posted X amount would get a limit increase.

Haha, that’s certainly how it feels. Though, with the message that appeared today about them working on a patch I do think they’re reading the forums. Would be nice if they occasionally dropped a comment to confirm they’re taking certain issues into account in their up-coming patches.