New to the forums. Perhaps it’s been posted, but is there a pinned thread with the user manual for download (since trying to pull it up on Windows 10 in game doesn’t work), or a centralized location for basic knowledge. I searched, folks, and came up empty-handed.

You have PDF file in game folder where you have installed the game. Or at least you should have. Strange that ingame link doesn’t work.

I suppose it is too early to create a wiki page because it would constantly change on almost every page.

You can download the game guide here: PhoenixPointGameGuide.pdf (483.3 KB)

Awesome, thanks, that’s exactly what I was looking for.

Yokes, as for why I don’t have it, I know Macs have a bug where the .pdf doesn’t extract or read properly. I’m Windows, but maybe something similar happened (?)

Highly unlikely, but who knows.

Hello! I’ve bought this game throught the site, and intalled it via Epic Games client.

I do not have a manual in my folder, also I’ve bought Signature Edition, but I’ve got only early access from it.

Manual could be accessed via “Game Guide” on the main screen, so it’s okay for me.
As for other bonuses - it’s not clear where I can find them.

@Homer_Morisson could you help me with this issue, since I’m not sure where I should post such issues.

Game is not released yet. All goodies mentioned in the description of Signature Edition are not available yet.

You have PDF file in game folder where you have installed the game.

Actually I don’t. I wonder why?
This is how my PhoenixPointContent folder looks like: 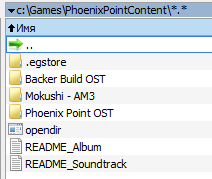 there is a link to it here too

You can read a copy of the manual here: https://drive.google.com/open?id=1n8ORQeDtBkWcnn5Es4LcWBxif7NsXqet

Don’t ask me. Btw my comment is related to Backers Build so it is no longer valid.

I just purchased and the manual is here in windows 10:

Epic actually has two phoenix points in the library. One is the game and the other is manual and any fluff (wallpaper etc) you bought. Strange, I know, maybe Epic didn’t think anyone reads manuals anymore…

Tbh the manual isn’t all that, it gives downright wrong info on e.g. difficulty levels